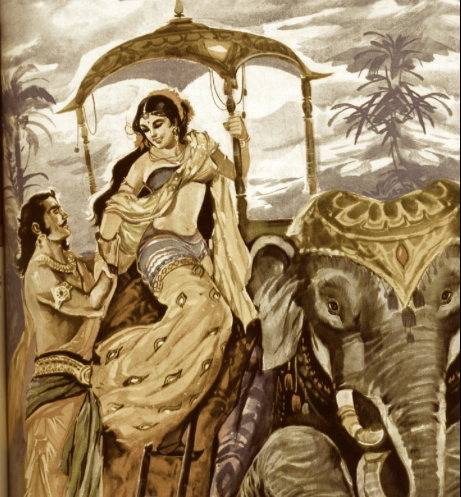 BhÄsa is one of the earliest and most celebrated Indian playwrights in Sanskrit, predating Kalidasa.

The plays of BhÄsa had been lost for centuries, until the manuscripts were rediscovered in the early 20th century. He was known only from the mentions in other works like the text Kavyamimamsa on poetics written during 880â€“920 AD. In the Kavyamimamsa, Rajashekhara attributes the play Svapnavasavadattam to BhÄsa.

KÄlidÄsa wrote in the introduction to his first play Malavikagnimitram: "Shall we neglect the works of such illustrious authors as BhÄsa, Saumilla, and Kaviputra? Can the audience feel any respect for the work of a modern poet, a KÄlidÄsa?"

BhÄsa's date is uncertain, but it most likely falls within 3â€“4th centuries CE. BhÄsa's language is closer to KÄlidÄsa (5th century) than it is to AÅ›vaghoá¹£a (1st-2nd century CE); former suggestions of dates as early as the 4th century BCE are now dismissed as "fantastical" by the Sanskrit scholar Sheldon Pollock.

BhÄsa does not follow all the dictates of the Natya Shastra. This has been taken as a proof of their antiquity; no post-KÄlidÄsa play has been found to break the rules of the Natya Shastra's. BhÄsa allows scenes that contain signs of physical violence to be shown on stage in plays like Urubhanga. This is strictly frowned upon by Natya Shastra. However, the chronological implications of this fact are not certain; Indu Shekhar states that, "Whatever the exact date [of Natya Shastra] may have been, it is significant that no direct reference to NS was made before the seventh century," when it became accepted as the subject of attention for many poets, writers, and theorists.

Discovery of his plays

In the year 1909 the play Swapnavasavadatta was discovered by Pandit Anandalvar of the Archeological Survey of Mysore, two years later the Mahamahopadhyaya T. Ganapati Sastri came upon 13 Sanskrit plays that were used in the Koodiyattam plays. The first discovery yielded ten complete manuscripts (Swapnavasavadatta, Pratigya Yaugandharayana, Pancharatra, Charudatta, Dootaghatotkacha, Avimaraka, Balacharita, Madhyamavyayoga, Karnabhara and Urubhanga) and fragments of one. Later, he found two more: Abhisheka and Pratimanataka. Finally, he found intact manuscript of Dootavakyam, adding up to total thirteen plays believed to be authored by Bhasa. Unlike other classical plays, none of them mentioned the author, but one was the SwapnavÄsavadatta. Comparing the style of writing and techniques employed in these plays and based on the knowledge that SwapnavÄsavadatta was BhÄsa's work, all of them were credited to him. Some scholars have disputed BhÄsa's authorship of all the plays but over the years the plays have generally come to be ascribed to BhÄsa.

The Uru-Bhanga and Karna-bhara are the only known tragic Sanskrit plays in ancient India. Though branded the villain of the Mahabharata, Duryodhana is the actual hero in Uru-Bhanga shown repenting his past as he lies with his thighs crushed awaiting death. His relations with his family are shown with great pathos. The epic contains no reference to such repentance. The Karna-bhara ends with the premonitions of the sad end of Karna, another epic character from Mahabharata. Early plays in India, inspired by Natya Shastra, strictly considered sad endings inappropriate.

The plays are generally short compared to later playwrights and most of them draw the theme from the Indian epics, Mahabharata and Ramayana.Though he is firmly on the side of the heroes of the epic, BhÄsa treats their opponents with great sympathy. He takes a lot of liberties with the story to achieve this. In the Pratima-nataka, Kaikeyi who is responsible for the tragic events in the Ramayana is shown as enduring the calumny of all so that a far noble end is achieved.

Image:
Depiction of a scene from the story of Vasavadatta
Cover page of Vasavadatta (Amar Chitra Katha) Paperback â€“ 1972
by Meena Talim (Author)

ASP Iyer was a judge in the Madras High Court . He was a noted author of humorous prose. His son was AP Venkateswaran, the former Foreign Secretary of India

Kalpana Peck and Usha Venkateswaran I bet this brings back memories. My friend Ashok Krishnan pointed out that Kalpana, your grandfather is the man who wrote this book.

Sir any information about NAL and DAMAYANTI

Ah! ACK illustrations and the hot babes of ancient India!

Was it Bana or Bhasha please