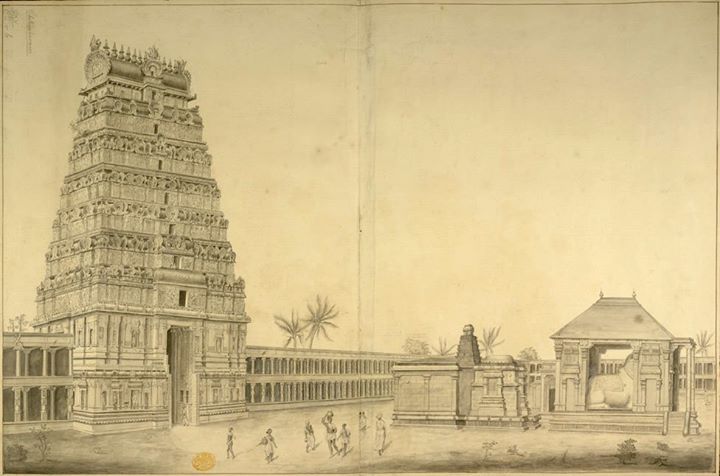 Image:
Drawing by F. Swain Ward in c.1762 of the temple at Chidambaram in Tamil Nadu, part of King George III's Topographical Collection. The town of Chidambaram is a famed religious and artistic centre in south India. The temple here is dedicated to Shiva in his form as Nataraja, performing the cosmic dance. It was founded by the Chola Kings, devotees of Nataraja, between the 12th and 13th centuries. They held their coronation ceremonies here. The temple lies within four walled enclosures, raised in different periods. Some of the most splendid structures of Chidambaram are the four lofty gopurams (towers) of the third walled enclosure, built in the 12th century but with later renovations. The gopurams mark the cardinal points and act as gateways to the temple. One of the heavily decorated gopurams can be seen in the left in this picture. To the right is the little shrine to Nandi, the sacred bull which is the vehicle of Shiva.