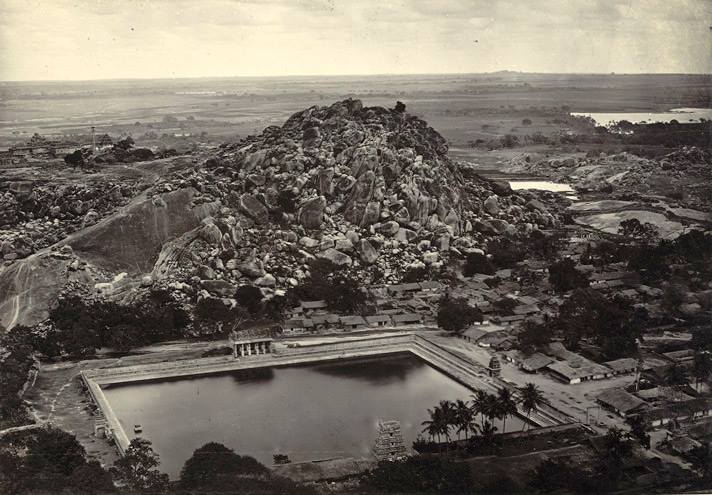 Digital Rare Book:
Studies in Ancient Hindu Polity (Based on the Arthaṡâstra of Kautilya)
By Narendranath Nath Law
With an introductory essay on the age and authenticity of the Arthasastra of Kautilya by Prof. Radhakumud Mookerji
Published by Longmans, Green, and Co., London - 1914

Image:
This photograph of Chandragiri Hills and Tank at Sravanabelgola taken in the 1890s by an unknown photographer, is from the Curzon Collection's 'Souvenir of Mysore Album'."The legend runs that Bhadrabahu, a guru of great sanctity later recognised as a Jain saint, in consequence of a dreadful famine which he had predicted, led a large number of his followers south from Ujjayini and here, overcome by the fatigues of the journey combined with old age, ordered his people to go on whilst he remained with his chief disciple, the great emperor Chandra Gupta, and expired in a cave on the hill, named Chandragiri after the emperor." This print and its description comes from an album in the Curzon Collection entitled 'Souvenir of Mysore'.

Sravanabelagola which is also known as "the white pond of the Sravana" or "the Jain monk" is named with reference to the colossal Jain image of the place and its prefix Sravana that also serves to distinguish it from other Belgolas with the prefixes Hale and Kodi. The derivation of the word 'Belagola' appears to have been from the two Kannada words Bel (white) and Kola (pond) in allusion to the beautiful pond in the middle of the town. The Sanskrit equivalents Sveta-sarovara, Dhavala sarovara and Dhavala-saras used in the inscriptions that support the derivation of this word from the two Kannada words. Some inscriptions mention the name of the place as Belgula (or also Belugula and Belagula) which have given rise to another derivation from the plant called white gulla (Solanum ferox). This derivation is in allusion to a tradition which says that a pious old woman completely anointed the colossal image with the milk brought by her in a gullakayi or gulla fruit. The place is also designated as Devara Belagola (Belgola of the God) and Gommatapura (the city of Gommata, the name of the colossus) in some epigraphs. Further, the epithet Dakshinakasi or southern Kasi is applied to it in some modern records. There are two hills, Chandragiri (Chikkabetta) and Vindyagiri. The last shruta-kevali, Bhadrabahu Swami, and his pupil, Chandragupta Maurya (formerly the King), is believed to have meditated there. Chandragupta Basadi, which was dedicated to Emperor Chandragupta Maurya, was originally built there by Emperor Ashoka in the third century BC. Chandragiri also has memorials to numerous monks and shravakas, who have meditated there since the fifth century AD, including the last King of the Rashtrakuta dynasty of Manyakheta. Chandragiri also has a famous temple built by Chamundaraya, who was a disciple of Acharya Nemichandra Siddhanta-chakravarti. The 57 feet monolithic statue of the Bhagavan Gomateshwara Bahubali is located on the Vindyagiri.It is considered to be the world's largest monolithic stone statue.