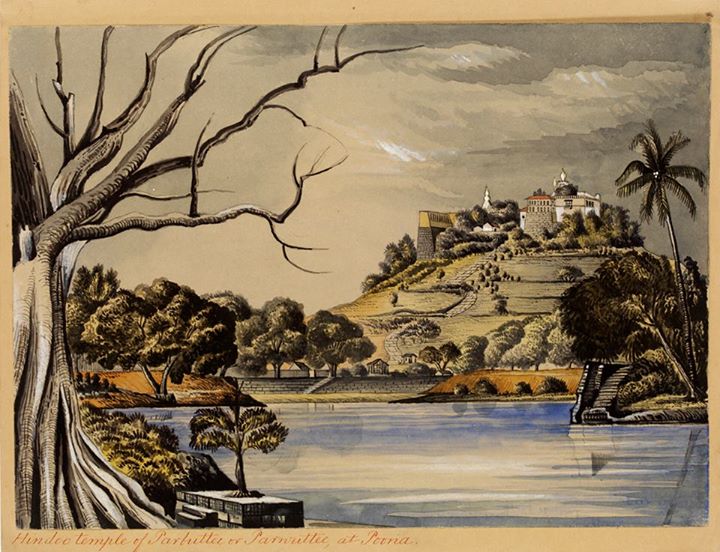 Digital Rare Book:
A local history of Poona and its battlefields
By Col.L.W. Shakespear
Published by Macmillan & Co., London - 1916

Image:
North-east view of the temples of Parbati with the nearby Parbati tank in the foreground. July 1849-November 1850.
By Henry Francis Ainslie

Pencil and watercolour, heightened with white.

The amateur topographical artist Henry Francis Ainslie (1803-79) was born in Edinburgh, the son of General Sir George Robert Ainslie, Bt., who was a numismatist, an MP and former British ambassador to the Ottoman Empire at Constantinople, where he acquired a vast collection of antiquities, coins, and works of art. Henry Ainslie joined the British Armyâ€™s 83rd Regiment of Foot (later the Royal Ulster Rifles) in 1824. After serving in Ceylon (Sri Lanka), Canada and the British Isles, he sailed for Bombay with his regiment in February 1849, and between July and November the following year he was stationed in the Poona (Pune) district, where he painted this view of the temples of Parbati with the nearby Parbati tank in the foreground. His drawing style is distinguished by the use of earth colours, strongly outlined in black ink which rendered topographical features into bold simplified forms. While Ainslieâ€™s army training would have included survey drawing, his watercolours, of which the V&A owns twenty-three, were probably painted for his own pleasure rather than as official surveys. From April 1853 Ainslie was on furlough in Europe, retiring on full pay as a lieutenant-colonel in 1855. He died at Westminster, London, on 29 March 1879.