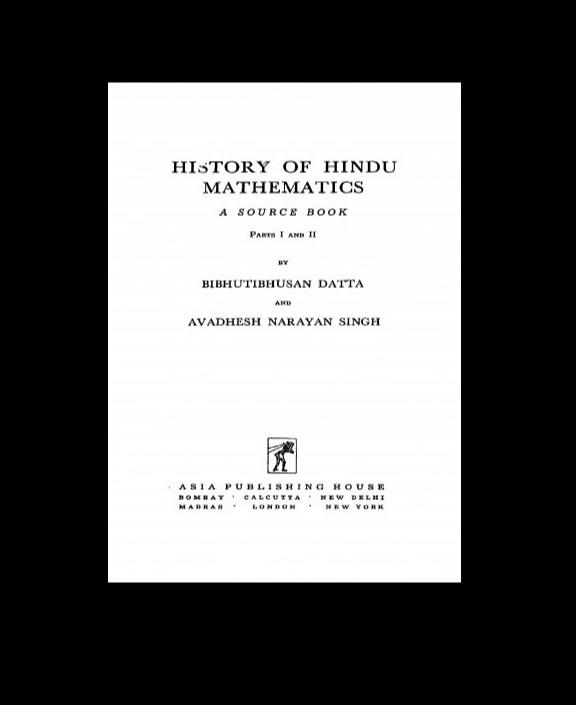 Little is known at present to historians of mathematics regarding the achievements of the early Hindu mathematicians and our indebtedness to them. Though it is now generally admitted that the decimal place-value system of numeral notation, was invented and first used by the Hindus, it is not yet fully realized to what extent we are indebted to them for our elementary mathematics. This is due to the lack of a reliable and authentic history of Hindu mathematics. Our object in writing the present book has been to make up' for this deficiency by giving a comprehensive account of the growth and development of the science of mathematics in India from the earliest known times down to the seventeenth century of the Christian era.

The subject is treated by topics. Under each topic are collected together and set forth in chronological order translations of relevant Sanskrit texts as found in the Hindu works. The texts have been elucidated, wherever necessary, by adding explanatory notes and comments, and also by illustrative examples culled from original sources. We have tried to avoid repetition as far as has been consistent with our aim. However, on several occasions it has been considered desirable to repeat the same rule in the words of different authors in order to emphasize the continuity or rather the gradual evolution of mathematical thought and terminology in India. Comparative study of this kind has helped us to throw light on certain obscure Sanskrit passages and technical terms whose full significance had not, been understood before. In translating the texts we have tried to be as literal and faithful as possible without sacrificing the spirit of the original. Sometimes it has not been possible to find exact parallels to Sanskrit words and technical terms in English. In all such cases we have tried to maintain the spirit of the original in the English version.

The above plan of the book has been adopted in pursuance of our intention to place before those who have no access to the Sanskrit sources all evidence, unfavourable as well as favourable, so that they can judge for themselves the claims of Hindu mathematics, without depending solely on our statements. In order to facilitate comparison with the development of mathematics in other countries the various topics have been arranged generally in accordance with the sequence in Professor D. E. Smith's History of Mathematics, Vol. II. This has sometimes necessitated divergence from the arrangement of topics as found in the Hindu works on mathematics.

In search of material for the book we had to examine the literature of the Hindus, non-mathematical as well as mathematical, whether in Sanskrit or in Prakrit (Pali and Ardha Magadhi). Very few of the Hindu treatises on mathematics have been printed so far, and even these are not generally known. The manuscript works that exist in the various Sanskrit libraries in India and Europe are still less known. We have not spared labour in collecting as many of these as we could. Sanskrit mathematical works mentioned in the bibliography given at the end of this volume have been specially consulted by us. We are thankful to the authorities of the libraries at Madras, Bangalore, Trivandrum, Trippunithura and Benares, and those of the India Office (London) and the Asiatic Society of Bengal (Calcutta) for supplying us transcripts of the manuscripts required or sending us manuscripts for consultation. We are indebted also to Dr. R. P. Paranjpye, Vice-Chancellor of the Lucknow University, for help in securing for our use several manuscripts or their transcripts from the state libraries in India and the India Office, London.

It would not have been possible to carry our study as far as has been done without the spade work of previous writers. Foremost among these must be mentioned the late Pandit Sudhakar Dvivedi of Benares, whose editions of the Lttdvati, Brdhmasphuta-siddhdnta,Trisatika, Mahdsiddhdnta, Siddhdnta-tattva-vi'veka, etc.,have been of immense help. Colebrooke's translations of the arithmetic and algebra of Brahmagupta and Bhaskara II, Kern's edition of the Aryabhatiya and Rangacarya's edition (with English translation) of the Ganita-
sdra-samgraha of Mahavira have also been of much use.
The recent work of G. R. Kaye, however, has been found to be extremely unreliable. His translation of the Ganitapdda of the Aryabhatiya and his edition of the
Bakhshali Manuscript are full of mistakes and are misleading.

Haven't had a chance to read what's written above myself but Gupy Singh and Rishi Handa this is one for you.

Nice..most of the Hindu and Buddhist script and literature was lost during Turk Invasion in 1193 and burning down of Nalanda library...

Got a book about this on my shelf. Familiar with the intriduction indians had with trigonometry and work with infinite series.