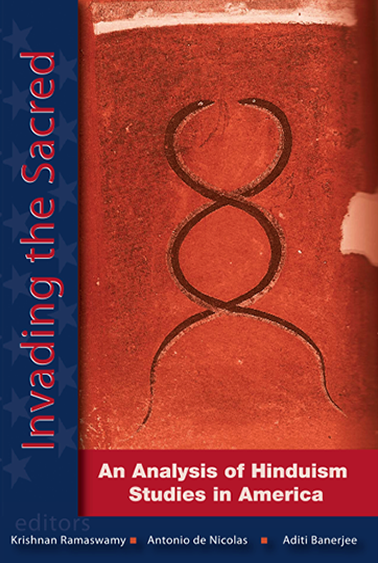 Nearly a century ago, some believed that Indian art constituted multiheaded monsters and horrendous sculpture with multi arms. An animated and well informed response came from Sri Aurobindo, A.K. Coomaraswamy and E.B. Havell. Not only was a corrective ensured in the comprehension of a complex multilayered culture, also it initiated a serious and in depth studies of the dimensions of the mythic image in many cultures where cosmogony and cosmology is encoded in the mythic narrative and the symbolic visual image. Eliade's work assumes importance as a pioneer of such studies, withstanding recent critiques of his work. As general editor of the Encyclopedia of Religions published in USA, he sought to place the diversity of religions, traditions both from within the context of the particular tradition but also in a comparative context. Against the background of this limited reference to the historiography of the interpenetrative domains of myth, artistic manifestation and studies on religion and the religious, one has been dismayed to find that certain scholars nearly five to eight decades later should confine themselves to the interpretation of the complex multilayering of the mythical , iconic, and symbolic image through a single perspective of a Freudian psycho-analytical approach applied to the exclusion of the others. Also there is a sense of bewilderment when one notes that rather outdated and almost passe theories of the psycho-analytical are being applied, when the discipline has taken in many more penetrative paths. The question then arises why some academics in some departments have chosen to undertake such studies with a single-minded pursuit of reading myth and symbol at particular level i.e. sexual. This exclusive preoccupation could have been overlooked or contested and a healthy discourse begun, had it not been for the fact that scholarship and cognitive tools are being used for purposes other than intellectual or scholastic. This brings up issues of organizational structures of empowerment of certain ideological positions, and the consequent potential of influencing young minds not exposed to alternate interpretations. Exclusion of such material from reading lists appears to be motivated by considerations other than purely academic. The space for intellectual enquiry shrinks verging on dogmatism of a particular view point. In turn such subtle or not so subtle strategies become the instruments of creating deep fissures in the socio-cultural fabric of a democratic country like USA with the rhetoric of upholding the values of multiculturalism. Doubts arise whether at the ground reality it is not a case (at least judging from this debate) of a deeply entrenched subscription to the validity of assessing all plurality through a single parameter of mono culture. The essays in the volume reignite a debate which has politico historical antecedents. They bring to fore the varied dimensions of comprehending world views , mythic narratives, visual imagery and socio-religious cultural movements at the level of comprehension of text, academia legitimatization and organizational mobilization. It is hoped that the volume will be read with serious interest and introspection. Both S.N. Balagangadhara and Arvind Sharma have broadly outlined these issues in their respective contributions. As a former member of the US academy although intermittently over a half century, I have been bewildered and nonplussed, at the turn of gaze and the narrowing of gaze, which seems to have taken place in the departments of religious studies. I hope that the infection will not spread to other disciplines where one has enjoyed utmost freedom in a participating in some of the most stimulating intellectual discourses.
- Kapila Vatsyayan, Academic scholar and Rajya Sabha member