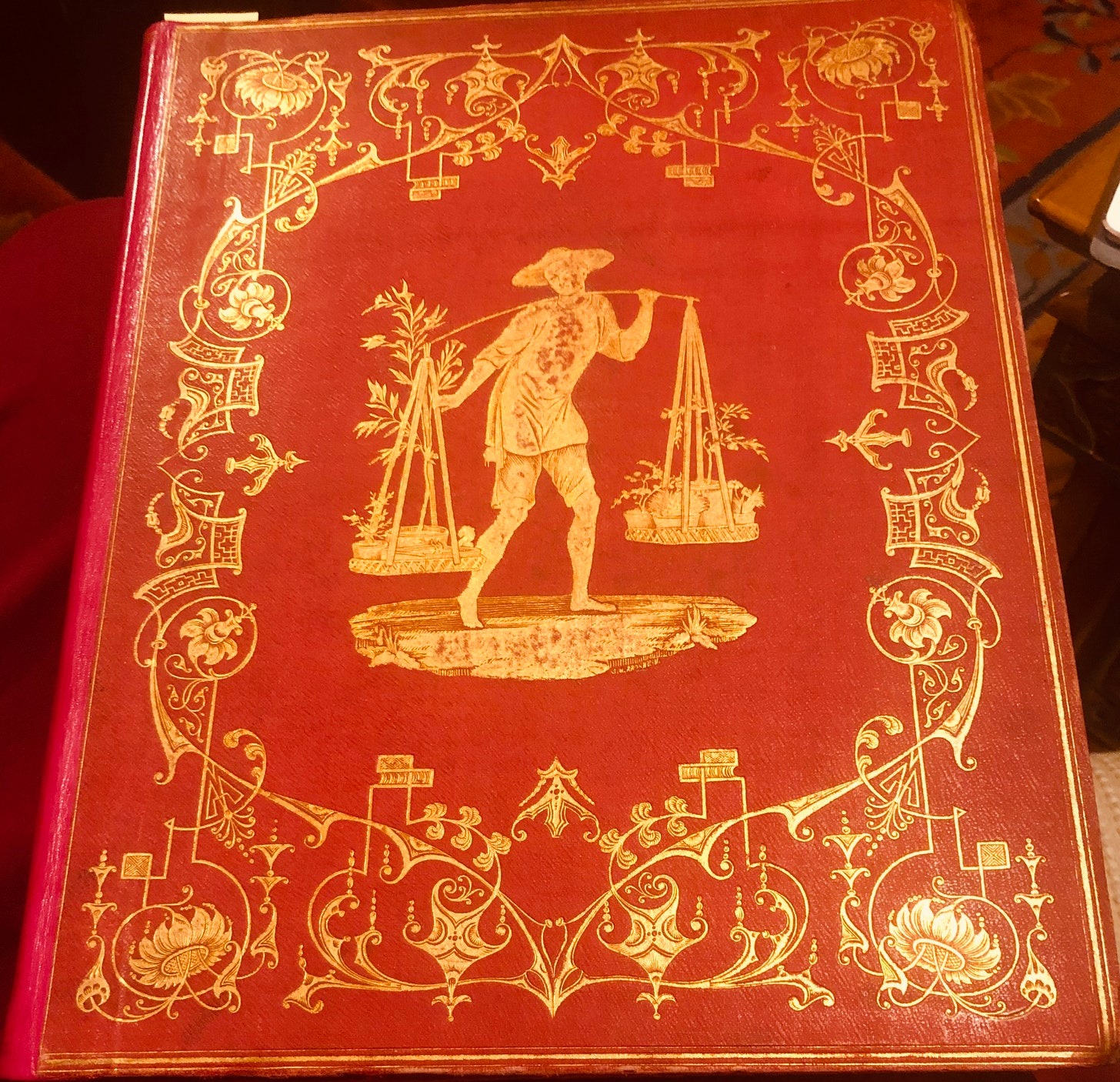 Rare Book Review:
China 1843
Is the Past another Country?
By Nirupama Menon Rao
Former Foreign Secretary, Ministry of External Affairs, Government of India and Former Ambassador to China
Published on May 3, 2021

Our previous posts have talked of India in the European eye, and now, this account will present aspects of Chinese life drawn and depicted in a set of four volumes called “China Illustrated”from 1843 that speak of the scenery, the architecture and social habits of “That Ancient Empire”, drawn “From Original and Authentic Sketches by Thomas Allom, Esq.” and supplemented with “Historical and Descriptive Notices by the Rev. G.N. Wright, M.A.” The cover of each of these volumes is a production in itself. (See picture)

Giving a full account of all that is contained in these four volumes is of course a tall order but let me dwell on a few aspects that interest me from my own study of China over nearly four decades. Let us start with the West Lake in Hangzhou on the eastern coast of that country, called Lake See-Hoo in this account from 1843.

The “fascinating scenery of these elysian regions”, the writer gushes - the picture of the lake that we see above is chinoiserie transposed onto the picturesque - an occidental view of a Chinese scene that would find a favored place in an English sitting room. As a pandemic rages around us, this view of the West Lake seems oddly calming, offering a view of a world imagined in happier, safer times, life as it could have been. So let your mind wander in this description of how like the “Latina of Venice, the face of these waters is crowded day and night with pleasure-boats of every grade”. The banks “are decked all round with flowering water-lilies, the purple poppy enriches the lowest margin of the land, beyond which rise in gradual dignity the camphor, the tallow-tree, and the arbor-vitae.” It is a “fairy lake”.

But as the pandemic reminds us, in the midst of life, we are in death. The sad “Vale of Tombs” is in the vicinity of the Lake. The Chinese, described as “rude in custom and habits” are nonetheless “too refined and sentimental in the reverence they pay the dead” and overlooking the lake are monuments, tombs and “fantastic sepulchral honours”, “melancholy resting places of many generations”. Cypresses and weeping willows overlook these tombs and often at night, torches are perceived in the area, borne by visitors to the graves of friends, relations and parents. In the seasons of the spring and autumn, the graves are swept “and garnished with tinsel-paper, slips of silk, flowers and various other ornaments”.

And overlooking it all is the fantastic “Temple of the Thundering Winds”, a “structure of great antiquity”, with foundations dating back to the era of Confucius. It is perched on the hill seen to the right of the picture of Lake “See Hoo” above.

The West Lake has inspired several Chinese poets. Here is what a eleventh century mandarin Su Shi, writing poetry like several of his tribe, had to say:

The blur of colour across the hills is richer still in rain.

If you wish to compare the lake in the West to the Lady of the West,

Lightly powdered or thickly smeared the fancy is just as apt.”

And thence on to the preparation of tea, such an ubiquitous feature of Chinese and Indian life. But before we do that, a question to our reader. Did you know that ‘Potala’ - as in the Potala in Lhasa, Tibet - or ‘Poo-tala’ as our book terms it - is apparently “a corruption of Budhalaya, the habitation of Budah”? There is a chapter devoted to the “Temple of Poo-Ta-La at Zhe Hol in Tartary” (see picture) and the magnificence of this structure. Tartary for the European adventurers and mercenaries of the eighteenth century and before was an amorphous region on the Eurasian landmass, astride the Caucasus and Central Asia. The temple in question is the Putuo Zongcheng Temple in Chengde, Hebei Province, China, modeled on the Potala in Lhasa.

Yes, tea. This infusion, it is observed, is supposed to “have been first employed by the Chinese as a preventive of leprosy”. Be that as it may, “its effects on the human system are those of a very mild narcotic and sedative; and like those of any similar medicine taken in small quantities, exhilarating.” Green tea possesses these elements in greater proportion than black tea it seems. “Still, of all narcotics, tea is the least pernicious, if indeed it be so in any degree.” Around the same time as the writing of this book, the tea-plant was discovered growing wild in Assam, “in the natural jungle which covers a large portion of the country, and beneath the shade of which it grows luxuriantly” . Thereafter the “culture of tea was spiritedly commenced” with the aid of Chinese cultivators with the confidence that it would ultimately be able to “compete with the large black-leafed tea, called in England, bohea, and in China ta-cha or large tea”.

Some interesting insights about the Chinese character are provided, whether true or false. It concerns the subject of food. This is what our book says: “In China, the voracity of the people obtrudes itself continually; every object of industry or occupation seems to have such a tendency to the appeasing of appetite”. Talking of the rich among the Chinese, it says that they are “decided epicures” while the middle and lower classes are “decided sensualists”. They are “the most omnivorous people in the world, there is not an animal or plant that can be procured by art and industry, and eaten without risk of life, that is not pressed into the service by these gastronomers: the flesh of wild horses is highly prized, the larvae of the sphinx-moth, bears’ paws, and the feet of other animals brought from Tartary, Cambodia and Siam, are deemed delicious; and edible birds’-nests are esteemed at the banquets of the mandarins, for which they are occasionally made into a soup.” Salesman in the meat market, enter it “having baskets suspended at the extremities of a carrying-pole, in which are contained dogs, cats, rats, or birds either tame or wild, generally alive - sea-slugs, and grubs found in the sugar-cane”. The tradition has carried on into modern China, it would seem. The controversial ‘wet markets’ come to mind.

Now let us consider the houses of the Chinese, this one a house of a Chinese merchant, near the city of Canton or Guangzhou. A Chinese villa (see picture) is described as an assemblage of buildings, instead of one great mansion, that displays a “fruitful imagination and an exhaustless fancy”. The Chinese roof is that part of the building upon which the architect “expends his best abilities”. It is adorned with scroll-work and gilded dragons. The other feature of this dwelling is an artificial lake on the grounds, its banks adorned with rock-work and pleasure-grounds, as if “fitted for wood-nymphs”, altogether conveying a sense of freedom and “unbounded playfulness so conspicuous in all their edicts or any cost or extent”.

The Chinese, we know, are obsessed with ceremony. The more you rise in social echelons, the level of ceremony increases with it. The Chinese have swagger. So let us take a look at “A Mandarin paying a Visit of Ceremony” from our book. The “distance between the man in authority, and the subject whose duty is to obey, is so jealously observed in this ancient and populous kingdom, no opportunity is left unimproved of extending the gulf of separation.” The mandarin travels ceremoniously in a palanquin or sedan chair, and before it a “crowd of servants advance”, beating gongs, and others “extolling in loud tones the virtues of their master, and calling upon the worthless rabble to make way”, terrifying the “ignorant and enslaved spectators who are peremptorily desired to stand and stare”. No public ceremony of joy or sorrow in China, our author says, is complete without the introduction of the bamboo, the “national cane” which is used by the “fellows in the pay of the great man” who “attend his progress” and who are armed with bamboo canes to “belabor any unhappy obstructions who endeavor to obtain a peep at the petty mandarin”. The vanities of officialdom in full display!

We are all familiar with the Great Wall of China, but one of the wonders of old China was the Porcelain Pagoda or Tower in the city of Nanking, now Nanjing, described by the early European travelers as the “best constructed and noblest building of all the East”. A Buddhist place of worship, it was also called the “Temple of Gratitude”, and was built in the fifteenth century, in the reign of the Yongle emperor of the Ming dynasty, and is considered by the Chinese as “only second in importance and miraculous character to the Great Wall”. It is described as a “delicate and gorgeous temple” cased on the exterior and interior with porcelain of various colors and shades, that had withstood the “violence of time” until struck by lightning in the the early 1800’s. It was thereafter repaired but then attacked by a “party of English seamen” with pickaxes and hammers who tried to deface its walls and “remove the curiosities”. Unfortunately, the pagoda was destroyed during the Taiping Rebellion in 1856, after this account of the temple appeared in our book. It has been rebuilt but its present reincarnation is entirely bereft of the splendor of the original. The Porcelain Pagoda was a legend in its time. We all remember the Hans Christian Andersen story “The Garden of Paradise” where the East Wind flew home from China to tell his mother , TheWind: “I came back from China, where I danced for a while around the To