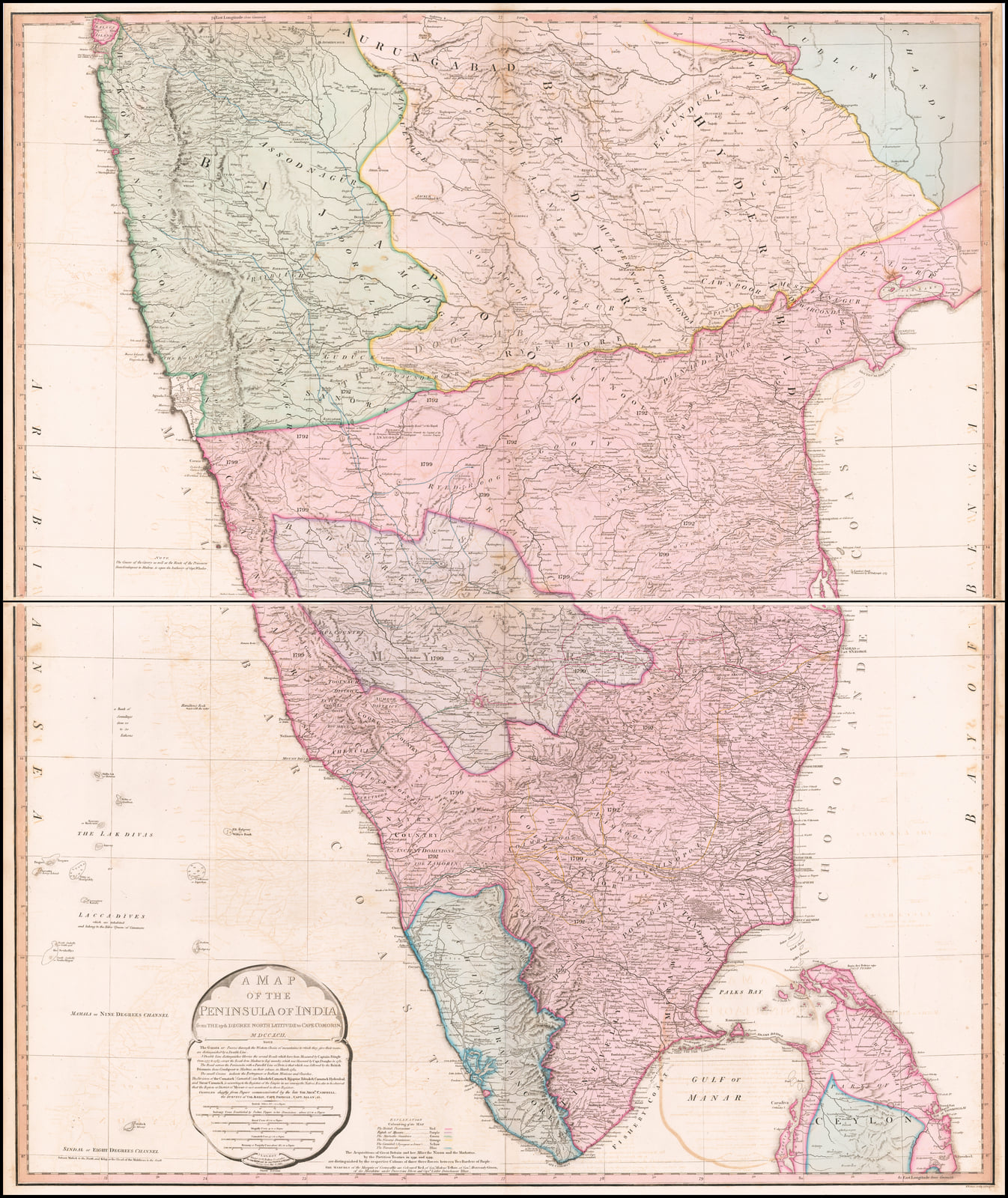 Digital Rare Book:
Historical sketches of the south of India, in an attempt to trace the HISTORY OF MYSOOR, from the origin of the Hindoo government of that state, to the extinction of the Mohammedan dynasty in 1799
By Lieut. Col. Mark Wilks
Printed for Longman, Hurst, Rees & Orme, London - 1817
Volume 3

This highly detailed two-page map depicts the southern portion of India as it was known at the turn of the nineteenth century. It includes thorough information about the extent of British rule in India at the time.

The map, which extends over two pages, depicts the subcontinent as far north as Bombay (Mumbai), as far east as the City of Ellore (Eluru) and the Bay of Bengal, as far south as the city of Cape Comorin (Kanyakumari) and the northern half of Ceylon (Sri Lanka), and as far west as the Laccadives (Lakshadwap).

The map highlights the British influence over the region by utilizing the Anglicized names of settlements and landmarks, as well as by emphasizing the British conquest of the continent through the color coding of the territories and marches of various British officials across the subcontinent.

In the bottom left corner, an ornate cartouche features several notes about the map and a series of scale bars portraying multiple units of measurement. A note from Faden is also featured on the first page, just above the page break, which explains his source, Captain Wheeler, for information about the placement of the route of a prisoner march from Condapoor to Madras.

Originally published in 1792, the map is color-coded by hand to portray the territorial holdings of various groups, as explained in a legend at the bottom. Red regions represented areas held by the British, largely under the control of the British East India Company. Purple regions are those under the influence of the Raja of Mysore, a kingdom ruled in the late-eighteenth century by Haider Ali and Tipu Sultan, who were known for inciting various rebellions against the British.

The holdings of the Marhatta are colored in green and the Nizam in orange. The annotation at the bottom of the map lists the Marhatta and the Nizam as being allies of Britain, acquired by partition treaties in 1792 and 1799. The territories in yellow are under the rule of the Nawabs of the Carnatic (also known as the Nawabs of Arcot), who managed to resist British colonization until the early-nineteenth century. Territories in blue were under control of the Kingdom of Travancore, which came under the rule of the British East India Company after a 1795 treaty.

Several notable marches across India are illustrated in the map. That of the Marquess of Cornwallis, whose route is demarcated in red, was one of the most prominent British figures in India during this era. From 1786 to 1793, he was governor general and commander in chief of India. He was known for defeating Tipu Sultan of Mysore in battle in 1792, forcing the Sultan to accept peace terms. Cornwallis also served as a general in the British Army during the American Revolutionary War and as Lord Lieutenant of Ireland in the last years of the eighteenth century.