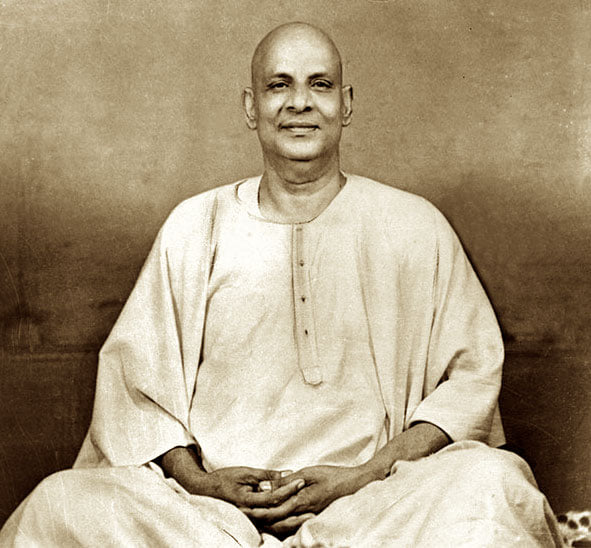 Sivananda Saraswati (or Swami Sivananda; 8 September 1887 â€“ 14 July 1963) was a Hindu spiritual teacher and a proponent of Yoga and Vedanta. Sivananda was born Kuppuswami in Pattamadai, in the Tirunelveli district of Tamil Nadu. He studied medicine and served in British Malaya as a physician for several years before taking up monasticism. He lived most of his life near Muni Ki Reti, Rishikesh.

He was the founder of the Divine Life Society (DLS) in 1936, Yoga-Vedanta Forest Academy (1948) and author of over 200 books on yoga, Vedanta, and a variety of subjects. He established Sivananda Ashram, the headquarters of the DLS, on the bank of the Ganges at Sivanandanagar, 3 kilometres (1.9 mi) from Rishikesh.

Sivananda Yoga, the yoga form propagated by his disciple Vishnudevananda, is now spread in many parts of the world through Sivananda Yoga Vedanta Centres. These centres are not affiliated with Sivananda's ashrams, which are run by the Divine Life Society.

In 1945, he created the Sivananda Ayurvedic Pharmacy, and organised the All-world Religions Federation.[4] He established the All-world Sadhus Federation in 1947 and the Yoga-Vedanta Forest Academy in 1948. He called his yoga the Yoga of Synthesis, combining the Four Yogas of Hinduism (Karma Yoga, Bhakti Yoga, Jnana Yoga, RÄja Yoga), for action, devotion, knowledge, and meditation respectively.

Disciples who went on to grow new organisations include:

Satchidananda Saraswati, founder of the Integral Yoga Institutes, around the world