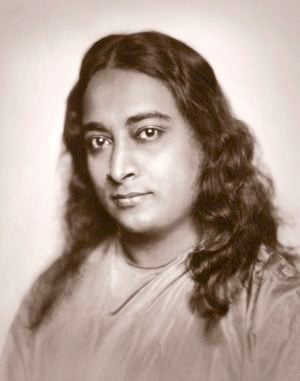 Paramahansa Yogananda (born Mukunda Lal Ghosh; January 5, 1893 â€“ March 7, 1952) was an Indian monk, yogi and guru who introduced millions to the teachings of meditation and Kriya Yoga through his organization Self-Realization Fellowship (SRF) / Yogoda Satsanga Society (YSS) of India, and who lived his last 32 years in America. A chief disciple of the Bengali yoga guru Swami Sri Yukteswar Giri, he was sent by his lineage to spread the teachings of yoga to the West, to prove the unity between Eastern and Western religions and to preach a balance between Western material growth and Indian spirituality. His long-standing influence in the American yoga movement, and especially the yoga culture of Los Angeles, led him to be considered by yoga experts as the "Father of Yoga in the West."

Yogananda was the first major Indian teacher to settle in America, and the first prominent Indian to be hosted in the White House (by President Calvin Coolidge in 1927); his early acclaim led to him being dubbed "the 20th century's first superstar guru," by the Los Angeles Times. Arriving in Boston in 1920, he embarked on a successful transcontinental speaking tour before settling in Los Angeles in 1925. For the next two and a half decades, he gained local fame as well as expanded his influence worldwide: he created a monastic order and trained disciples, went on teaching-tours, bought properties for his organization in various California locales, and initiated thousands into Kriya Yoga. By 1952, SRF had over 100 centers in both India and the US; today, they have groups in nearly every major American city. His "plain living and high thinking" principles attracted people from all backgrounds among his followers.

He published his book Autobiography of a Yogi in 1946 to critical and commercial acclaim; since its first publishing, it has sold over four million copies, with HarperSan Francisco listing it as one of the "100 best spiritual books of the 20th Century". Former Apple CEO Steve Jobs had ordered 500 copies of the book for his own memorial, for each guest to be given a copy. The book has been regularly reprinted and is known as "the book that changed the lives of millions." A 2014 documentary, Awake: The Life of Yogananda, won multiple awards at film festivals around the world. His continued legacy around the world, remaining a leading figure in Western spirituality to the current day, led authors such as Philip Goldberg to consider him "the best known and most beloved of all Indian spiritual teachers who have come to the West....through the strength of his character and his skillful transmission of perennial wisdom, he showed the way for millions to transcend barriers to the liberation of the soul."