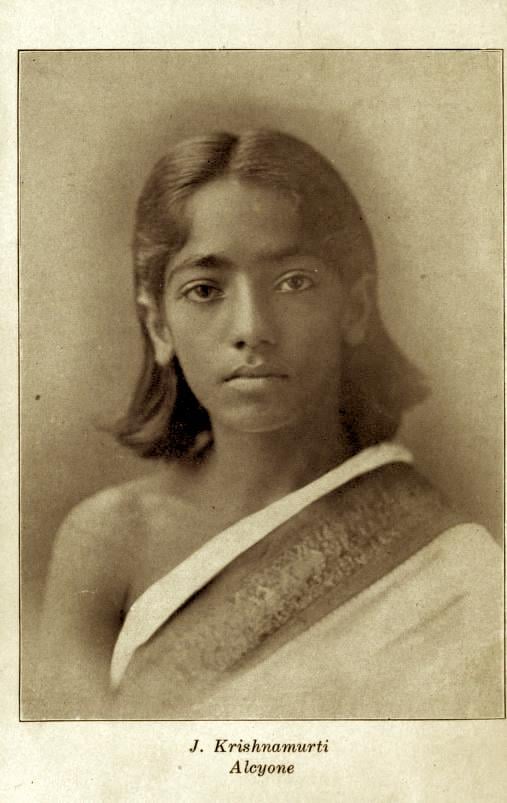 Digital Rare Book:
At The Feet Of The Master
By Alcyone ( Jiddu Krishnamurti)
Preface by Annie Besant
Printed at The Rajput Press, Chicago - 1911

Jiddu Krishnamurti (11 May 1895 â€“ 17 February 1986) was an Indian speaker and writer. In his early life, he was groomed to be the new World Teacher, but later rejected this mantle and withdrew from the Theosophy organization behind it. His interests included psychological revolution, the nature of mind, meditation, inquiry, human relationships, and bringing about radical change in society. He stressed the need for a revolution in the psyche of every human being and emphasised that such revolution cannot be brought about by any external entity, be it religious, political, or social.

Jiddu was born in south India in what is now the modern day Madanapalle of Andhra Pradesh. In early adolescence, he met occultist and theosophist Charles Webster Leadbeater on the grounds of the Theosophical Society headquarters at Adyar in Madras. He was subsequently raised under the tutelage of Annie Besant and Leadbeater, leaders of the Society at the time, who believed him to be a 'vehicle' for an expected World Teacher. As a young man, he disavowed this idea and dissolved the Order of the Star in the East, an organisation that had been established to support it.

Jiddu said he had no allegiance to any nationality, caste, religion, or philosophy, and spent the rest of his life travelling the world, speaking to large and small groups, as well as individuals. He wrote many books, among them The First and Last Freedom, The Only Revolution, and Krishnamurti's Notebook. Many of his talks and discussions have been published. His last public talk was in Madras, India, in January 1986, a month before his death at his home in Ojai, California. His supporters â€” working through non-profit foundations in India, Great Britain and the United States â€” oversee several independent schools based on his views on education. They continue to transcribe and distribute his thousands of talks, group and individual discussions, and writings by use of a variety of media formats and languages.