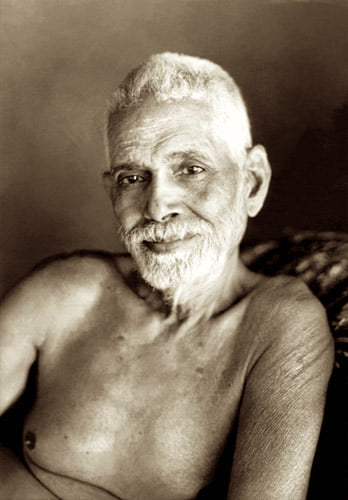 Ramana Maharshi (30 December 1879 â€“ 14 April 1950) was an Indian Hindu sage and jivanmukta (liberated being). He was born Venkataraman Iyer, but is mostly known by the name Bhagavan Sri Ramana Maharshi.

He was born in Tiruchuli, Tamil Nadu, India. In 1895, an attraction to the sacred hill Arunachala and the 63 Nayanmars was aroused in him, and in 1896, at the age of 16, he had a "death-experience" where he became aware of a "current" or "force" (avesam) which he recognized as his true "I" or "self", and which he later identified with "the personal God, or Iswara", that is, Shiva. This resulted in a state that he later described as "the state of mind of Iswara or the jnani". Six weeks later he left his uncle's home in Madurai, and journeyed to the holy mountain Arunachala, in Tiruvannamalai, where he took on the role of a sannyasin (though not formally initiated), and remained for the rest of his life.

He attracted devotees that regarded him as an avatar and came to him for darshan ("the sight of God"). In later years an ashram grew up around him, where visitors received upadesa ("spiritual instruction") by sitting silently in his company asking questions. Since the 1930s his teachings have been popularized in the West, resulting in his worldwide recognition as an enlightened being

Ramana Maharshi approved a number of paths and practices, but recommended self-enquiry as the principal means to remove ignorance and abide in Self-awareness, together with bhakti (devotion) or surrender to the Self.