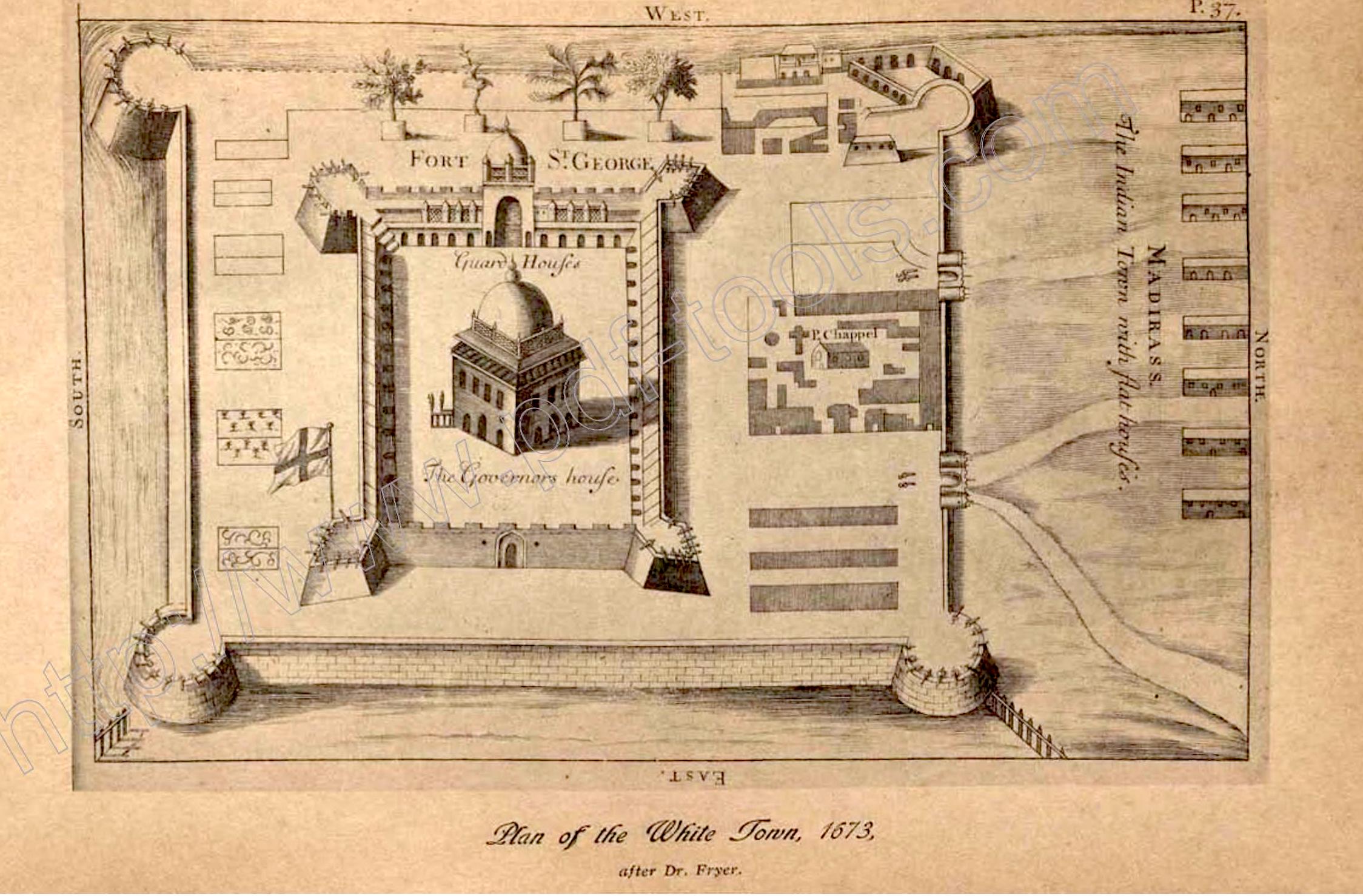 Though not the earliest British settlement in the Indian Peninsula, Madras possesses a peculiar interest as constituting, with the exception of the insignificant site at Armagon , the first territorial acquisition by the English in Hindustan. It enjoys the distinction, moreover, of being the oldest of the three presidential cities, and for a considerable period it, was the only fortified stronghold belonging to the East India Company. Fort St. George was erected, in fact, before Bombay was ceded or Calcutta founded. Its Government records ar^yoluminous, and are preserved in singular detail. Topics range from the conclusion of a treaty with a native prince to the disposal of !a worn-out horse or the midnight escapades of the Companyâ€™s junior servants. In one respect, however, the public archives are found strangely lacking; not a plan or map of the seventeenth or eighteenth century survives. The cause of the defect is unknown, but it is evident that wholesale loss or destruction must at some time have occurred. Equally strange is the lamentable fact that the Companyâ€™s home records, now stored in the India Office, are similarly deficient . Yet there is abundant evidence that numerous plans were drawn at Madras, and copies sent home to Leadenhall Street. Remarkable ignorance of the topography of old Madras results from this inexplicable dearth of maps. At the instance of the local Government, the present work was originally undertaken with the primary object of supplementing known facts by the collation of the topographical references which are scattered over the ancient records. A systematic search for old drawings in other quarters was prosecuted at the same time, as ancillary means to the same end. It became evident, however, as the investigation proceeded, that the Fort St. George archives contained a mass of interesting and hitherto unpublished matter, illustrating the origin of Madras institutions and the social life of the cityâ€™s inhabitants. With the consent of the Madras Government, the scope of the work was then widened, so as to embrace a history of the town covering the period from the founding of Fort St. George, in 1640, to the end of the eighteenth century ; and the Government of India, on being made acquainted with the project, arranged that the enlarged work should be published in one or more volumes of the Indian Records Series. The earliest document found at Fort St. George bears date 1670, but the Consultations are only sparsely preserved down to 1678. The gap between 1640 and 1678 has been bridged with the aid of the India Office archive, which have been consulted also in reference to later years in order to supplement the information available in Madras.

The Fort St. George records were explored about 1860 by Mr. Talboys Wheeler, who published a long series of extracts from them in his Madras in the Olden Time. He made use of Bruceâ€™s Annals for a sketch of the period 1640 to 1670, and thence forward employed the Madras archives, carrying his quotations down to 1749 ) when the town w'as restored to the British after the French occupation. Far from exhausting the matter available for this interval of eighty years, Mr. Wheeler did but touch its fringe. His excerpts are rarely reproduced in this work, and only when historical sequence demands iteration, or when the original spelling, which was not preserved by him, seems to add fresh interest to the transcript. Mr. Wheeler published his extracts in strict chronological order, so that the transition from one subject to another is often abrupt and occasionally violent. That plan has not been imitated. Instead, the extracts relating to a single topic during) a governorship or other convenient period are grouped together. The transcripts are printed verbatim, and are connected by a slender thread of explanation or narrative.