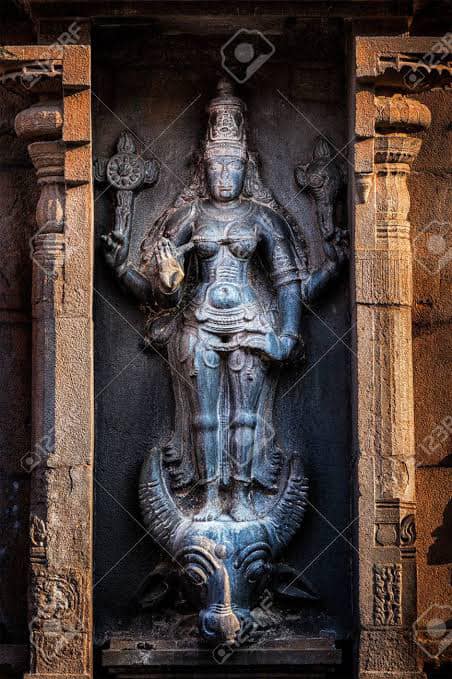 If you wish to know how Tamil culture richly contributed to Devi worship, then a study and appreciation of the iconic Silappathikaram is a great beginning.

If you are looking for Tamil verses in praise of â€˜Deviâ€™ this Navaratri, be sure to reach out for the Silappathikaram, written about 2,000 years ago in the Tamil Chera kingdom, by a prince-turned-monk â€˜Illango Adigalâ€™.

It is dated to the period 150 BCE to 150 CE and is a spectacular work describing the culture of the Tamil-speaking region as it unravels a plot centered around the merchant noble Kovalan, his dear wife Kannagi and his consort Madhavi, a courtesan endowed with superlative beauty, knowledge and talent.

Dramatic events unfold in this story as Illango Adigal weaves in extraordinary descriptions of Tamil music theory and classical dance (kootthu) even as he describes Madhaviâ€™s prowess.

The story takes readers through the Chola kingdom with ample descriptions of Kavirippoompattinam and references to places such as Tiruvenkatam (Tirupati), Tiruvarangam (Srirangam) et cetera, through the Pandya kingdom with its capital in the city of Madurai and through the Chera kingdom on the west coast of India.

In this vast work, are three noteworthy musical segments â€” Aaichiyar kuravai (the dance of the cowherd women (gopis) ), Vettuva vari â€” the song/dance of the hunter-folk and the Kurinjippattu; while the Kuravai is in praise largely of Krishna (and the various avatars of Vishnu such as Rama, the slayer of Ravana), the Kurinjippattu is in praise of Murugan, the Vettuva vari is in praise of Kottravai or Durga (in addition of course to the kAnal vari and the ArangEtra kAthai).

This set of verses from Vettuva vari described below is probably one of the oldest and finest poetry in praise of Durga (Mahishasura mardini).

Kovalan, Kannagi and the Saint Kavunti witness the ritual dance of the tribes-folk, led by â€˜sAliniâ€™ â€” the lady endowed with the rights to carry out this dance while being possessed by the force of the Goddess, while the other members offer their obeisance to the (energy of the) Goddess in her.

Clad in a tigerâ€™s skin and also covered by the skin of an elephant, you stand upon the dark head of the wild buffalo; you receive the worship of all Gods and stand unflinchingly as the wisdom of the Vedas
You stand as the shining light spreading its rays over the lotus heart of Vishnu, Shiva and Brahma â€” you also stand upon the deer with its dark twisted horns, after slaying Mahishasura (Mayidan), holding the sword in your hand laden with bangles.
Holding the conch and discus (much like Mahavishnu), in your lotus like hands, you stand like a fierce red-eyed lion-like bull; you stand thus, praised by the Vedas as the consort of Shiva with the third eye in his forehead and the river Ganga in his locks.
Now, the Durga Saptashati, which is part of the Markandeya Purana, is a text which is central to the worship of Durga during Navaratri in several parts of the country.

Also popularly recited is the Mahishasuramardini Stotram attributed to Adi Sankara, generally dated to around the 8th century CE. The Durga Saptashati (Devi Mahatmiya/Chandi Path) are generally dated anywhere between 250 and 450 CE.