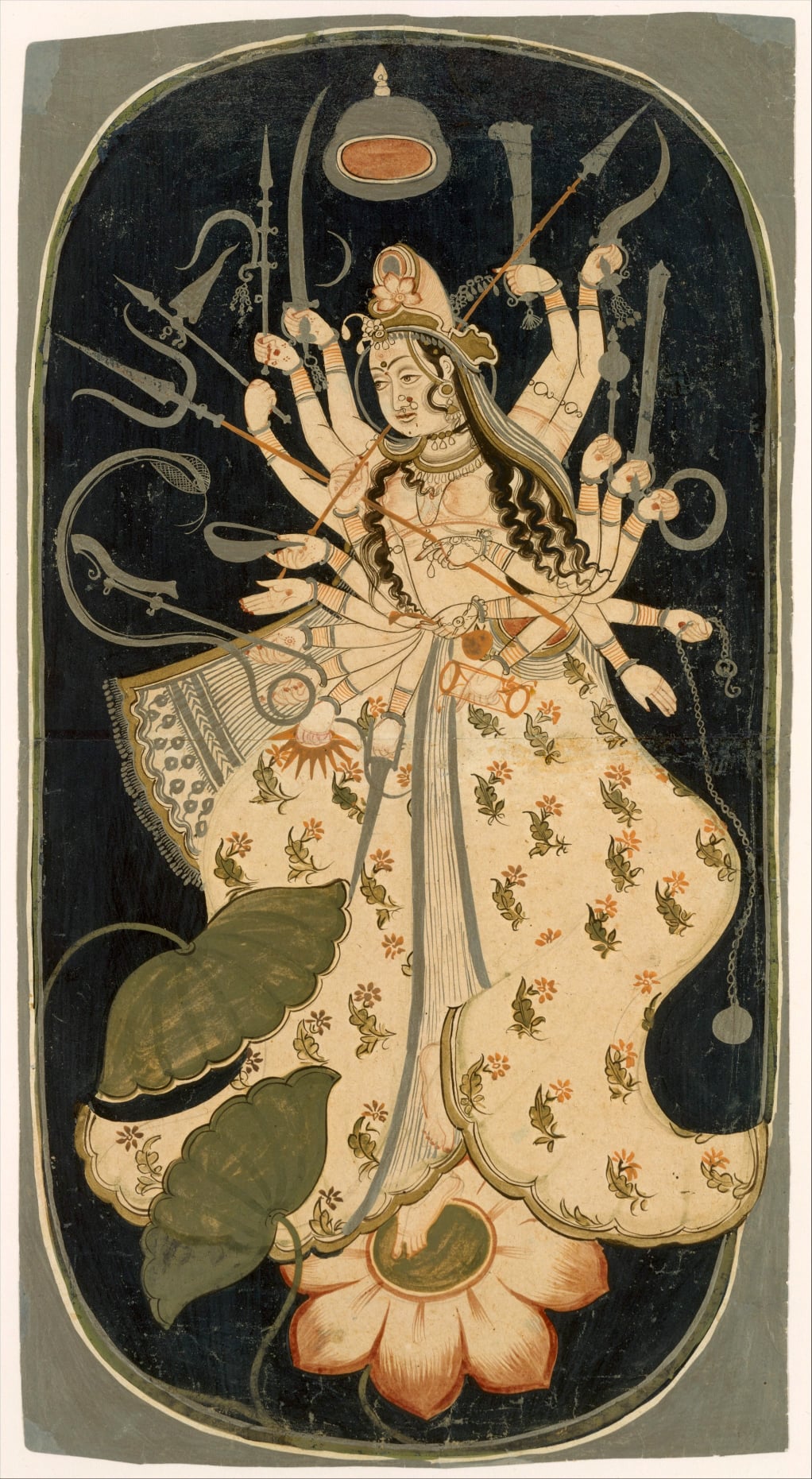 Essay:
The Meaning Of Durga
By David Frawley
Published in Swarajya - Oct 9, 2016

No country in the world demonstrates such enduring reverence for the Great Mother Goddess, as does India. The Goddess is celebrated in every form, aspect and quality, through music, art, ritual, mantra and meditation. She is honoured in women, the Earth, nature and the transcendent beyond all expression. Her worship is full of splendour, delight, mystery and wonder.

The Goddess is Shakti, meaning power, the resort of all transformative energy and cataclysmic force that mere human logic cannot comprehend. She possesses martial and regal forms that all must bow down before in awe. During the Navaratri â€“ Indiaâ€™s famous autumn festival of the Goddess â€“ she is worshipped as Durga, the supreme Shakti, holding all majesty, wisdom and grace.

Durga is the Mother of the universe from who comes forth the creation, sustenance and dissolution of all beings and all worlds. She is Chit-Shakti, the power of consciousness, out of which the cosmos coalesces as matter, life and mind.

India as a sublime culture and profound civilisation is the gift of Ma Durga. Durga is the Goddess who personifies India as a whole and its incredible vitality, from her presence in village shrines to her representation of the highest yogic spirituality. Bharat mata is Durga with her imperious lion. She was the image behind Indiaâ€™s independence movement, which worked through her inspiration, such as Sri Aurobindo so eloquently lauded.

Durga means she who takes us beyond all difficulties. She is the divine energy that protects the soul from duality, adversity and opposition, known and unknown. As Durga-Tara she delivers us across the turbulent ocean of ignorance to the radiant other shore beyond all darkness. She carries us over all dangers like a ship across the sea, as Vedic chants poetically reverberate.

Durga arises from agni, our inner flame of immortal life, awakening our motivation to reach the highest bliss. She is born from the power of tapas, the wholehearted concentration of our aspiration to immutable truth. She is the spiritual fire on Earth who removes all impurities for the soul to shine. Her lion indicates her ruling solar force that illumines all existence.

Durga grants us the transformative knowledge that takes us to a higher level of existence beyond all that we have previously thought possible. She is the Yoga Shakti dwelling in the heart that opens us up to the clear light of self-realisation, the revelation of our true divine nature that stands above all time, space and karma. The Kundalini Shakti arises and works within us through Durgaâ€™s force.

In this twenty-armed form, Mahadevi holds an array of weapons, affiliating her with all the male gods. This iconography also associates her with Durga, the slayer of the buffalo demon Mahisha. Ultimately powerful and creative, Mahadevi is understood by her devotees as the the true reality in the universe. As she was the protector deity of the ruling household of Bikaner, this representation would have had special significance for the court.