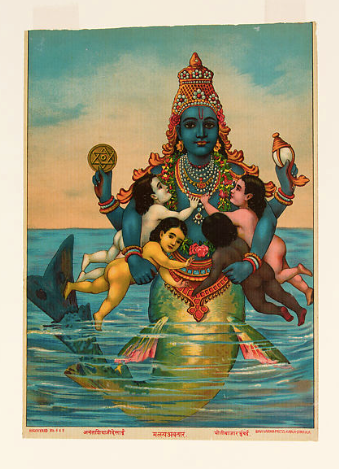 The Matsya Purana is one of the eighteen major Puranas (Mahapurana), and among the oldest and better preserved in the Puranic genre of Sanskrit literature in Hinduism. The text is a Vaishnavism text named after the half-human and half-fish avatar of Vishnu. However, the text has been called by the 19th-century Sanskrit scholar Horace Hayman Wilson, "although a Shaivism (Shiva-related) work, it is not exclusively so"; the text has also been referred to one that simultaneously praises various Hindu gods and goddesses.

The Matsya Purana has survived into the modern era in many versions, varying in the details but almost all of the published versions have 291 chapters, except the Tamil language version, written in Grantha script, which has 172 chapters.

The text is notable for providing one of earliest known definition of a Purana genre of literature. A history written with five characteristics is called a Purana, states Matsya Purana, otherwise it is called Akhyana. These five characteristics are cosmogony describing its theory of primary creation of the universe, chronological description of secondary creations wherein the universe goes through the cycle of birth-life-death, genealogy and mythology of gods and goddesses, Manvantaras, legends of kings and people including solar and lunar dynasties.

The Matsya Purana is also notable for being encyclopedic in the topics it covers. Along with the five topics the text defines a Purana to be, it includes mythology, a guide for building art work such as paintings and sculpture, features and design guidelines for temples, objects and house architecture (Vastu-shastra), various types of Yoga, duties and ethics (Dharma) with multiple chapters on the value of DÄna (charity), both Shiva and Vishnu related festivals, geography particularly around the Narmada river, pilgrimage, duties of a king and good government and other topics.

Inexpensive prints of Hindu gods became widely available in late nineteenth-century India as a direct result of the introduction of lithography presses. This new technology was intended to serve the colonial administration and aid the propagation of Christianity by missionary organizations, but it was quickly deployed to create a new form of popular Hindu devotional art. Here we see Vishnuâ€™s first avatar, his fish incarnation, embracing four joyful infants, evoking his role as savior of primeval man (Manu) from the Great Flood. The number four alludes to the Four Vedas, Indiaâ€™s vast corpus of ancient divine knowledge, which Vishnu rescues from the deluge.