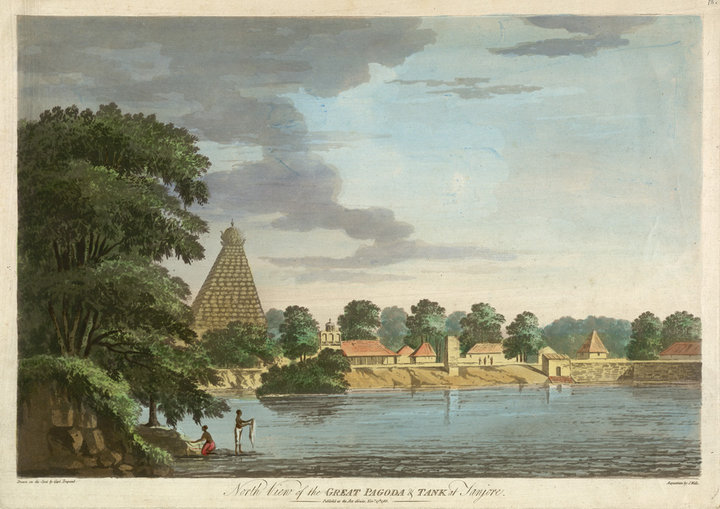 North View of the Great Pagoda and Tank at Tanjore'. Coloured aquatint by J. Wells after a drawing by Capt. Trapaud - 1788.

Coloured aquatint by J. Wells after a drawing by Capt. Trapaud, of the Brihadishvara Temple and tank at Thanjore, dated 1788.
The great Brihadishvara Temple represents the greatest architectural achievement of the Chola era. It was patronised around 1010 by the king Rajaraja I (c.985-1012), who donated the golden pot finial which is still standing at the summit of the tower. It is entered through the east by two gateways and it stands in the middle of a large courtyard surrounded by smaller shrines. The tall pyramidal tower over the sanctuary reaches 70 metres and consists of diminishing storeys culminating in the octagonal domed roof and the golden pot finial. It is covered with miniature temples and figure sculptures that symbolise the cosmic manifestation. The outer walls have niches with sculptured panels depicting various aspects of Shiva. This view is taken from the Shivaganga tank with the tower of the temple in the background.