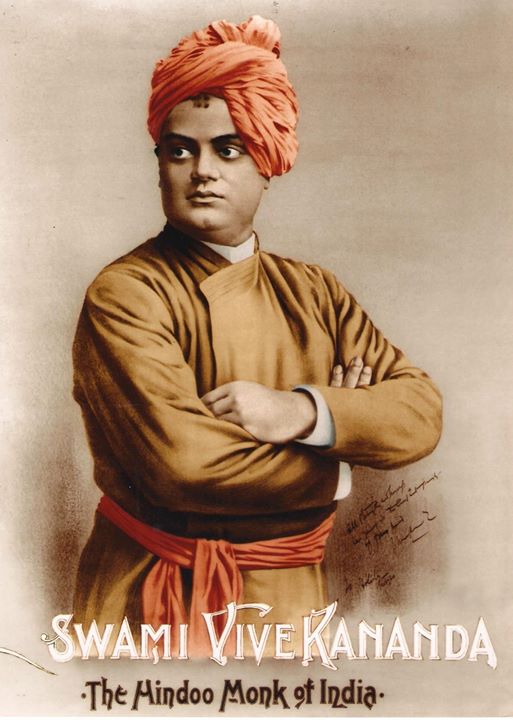 Essay:
What Did J.D. Salinger, Leo Tolstoy, and Sarah Bernhardt Have in Common?
By A.L.Bardach
Published in Wall Street Journal - March 30, 2012

The surprisingâ€”and continuingâ€”influence of Swami Vivekananda, the pied piper of the global yoga movement

By the late 1960s, the most famous writer in America had become a recluse, having forsaken his dazzling career. Nevertheless, J.D. Salinger often came to Manhattan, staying at his parents' sprawling apartment on Park Avenue and 91st Street. While he no longer visited with his editors at "The New Yorker," he was keen to spend time with his spiritual teacher, Swami Nikhilananda, the founder of the Ramakrishna-Vivekananda Center, located, then as now, in a townhouse just three blocks away, at 17 East 94th Street.

Though the iconic author of "The Catcher in the Rye" and "Franny and Zooey" published his last story in 1965, he did not stop writing. From the early 1950s onward, he maintained a lively correspondence with several Vedanta monks and fellow devotees.

After all, the central, guiding light of Salinger's spiritual quest was the teachings of Vivekananda, the Calcutta-born monk who popularized Vedanta and yoga in the West at the end of the 19th century.

These days yoga is offered up in classes and studios that have become as ubiquitous as Starbucks. Vivekananda would have been puzzled, if not somewhat alarmed. "As soon as I think of myself as a little body," he warned, "I want to preserve it, protect it, to keep it nice, at the expense of other bodies. Then you and I become separate." For Vivekananda, who established the first ever Vedanta Center, in Manhattan in 1896, yoga meant just one thing: "the realization of God."

After an initial dalliance in the late 1940s with Zenâ€”a spiritual path without a Godâ€”Salinger discovered Vedanta, which he found infinitely more consoling. "Unlike Zen," Salinger's biographer, Kenneth Slawenski, points out, "Vedanta offered a path to a personal relationship with Godâ€¦[and] a promise that he could obtain a cure for his depressionâ€¦.and find God, and through God, peace."

Finding peace would, however, be a lifelong battle. In 1975, Salinger wrote to another monk at the New York City center about his own daily struggle, citing a text of the eighth-century Indian mystic Shankara as a cautionary tale: "In the forest-tract of sense pleasures there prowls a huge tiger called the mind. Let good people who have a longing for Liberation never go there." Salinger wrote, "I suspect that nothing is truer than that," confessing despondently, "and yet I allow myself to be mauled by that old tiger almost every wakeful minute of my life."

It was his daily mauling by the "huge tiger" and his dreaded depressions that led Salinger to abandon his literary ambitions in favor of spiritual ones. Salingerâ€”who appears to have had a nervous breakdown of sorts upon his return from the gruesome front lines of World War IIâ€”subscribed to Vivekananda's view of the mind as a drunken monkey who is stung by a scorpion and then consumed by a demon. At the same time, Vivekananda promised hope and solaceâ€”writing that the "same mind, when subdued and controlled, becomes a most trusted friend and helper, guaranteeing peace and happiness." It was precisely the consolation that Salinger so desperately sought. And by 1965 he was ready to renounce his once gritty pursuit of literary celebrity.

Although all but forgotten by America's 20 million would-be yoginis, clad in their finest Lululemon, Vivekananda was the Bengali monk who introduced the word "yoga" into the national conversation. In 1893, outfitted in a red, flowing turban and yellow robes belted by a scarlet sash, he had delivered a show-stopping speech in Chicago. The event was the tony Parliament of Religions, which had been convened as a spiritual complement to the World's Fair, showcasing the industrial and technological achievements of the age.

On its opening day, September 11, Vivekananda, who appeared to be meditating onstage, was summoned to speak and did so without notes. "Sisters and Brothers of America," he began, in a sonorous voice tinged with "a delightful slight Irish brogue," according to one listener, attributable to his Trinity Collegeâ€“educated professor in India. "It fills my heart with joy unspeakable..."

Annie Besant, a British Theosophist and a conference delegate, described Vivekananda's impact, writing that he was "a striking figure, clad in yellow and orange, shining like the sun of India in the midst of the heavy atmosphere of Chicagoâ€¦a lion head, piercing eyes, mobile lips, movements swift and abrupt." The Parliament, she said, was "enraptured; the huge multitude hung upon his words." When he was done, the convocation rose again and cheered him even more thunderously. Another delegate described "scores of women walking over the benches to get near to him," prompting one wag to crack wise that if the 30-year-old Vivekananda "can resist that onslaught, [he is] indeed a god."

"No doubt the vast majority of those present hardly knew why they had been so powerfully moved," Christopher Isherwood wrote a half century later, surmising that a "strange kind of subconscious telepathy" had infected the hall, beginning with Vivekananda's first words, which have resonated, for some, long after. Asked about the origins of "My Sweet Lord," George Harrison replied that "the song really came from Swami Vivekananda, who said, 'If there is a God, we must see him. And if there is a soul, we must perceive it.' "

The teachings of Vedanta are rooted in the Vedas, ancient scriptures going back several thousand years that also inform Buddhism, Hinduism and Jainism. The Vedic texts of the Upanishads enshrine a core belief that God is within and withoutâ€”that the divine is everywhere. The Bhagavad Gita (Song of God) is another sacred text or gospel, whereas Hinduism is actually a coinage popularized by Vivekananda to describe a faith of diverse and myriad beliefs.

Vivekananda's genius was to simplify Vedantic thought to a few accessible teachings that Westerners found irresistible. God was not the capricious tyrant in the heavens avowed by Bible-thumpers, but rather a power that resided in the human heart. "Each soul is potentially divine," he promised. "The goal is to manifest that divinity within by controlling nature, external and internal." And to close the deal for the fence-sitters, he punched up Vedanta's embrace of other faiths and their prophets. Christ and Buddha were incarnations of the divine, he said, no less than Krishna and his own teacher, Ramakrishna.

'He is the most brilliant wise man,' Leo Tolstoy waxed. 'It is doubtful another man has ever risen above this selfless, spiritual meditation.'
Although Vivekananda was a Western-educated intellectual of encyclopedic erudition, "the descendant of 50 generations of lawyers," as he would say, Ramakrishna was for all intents and purposes illiterate. Born Gadadhar Chattopadhyay, Ramakrishna had not an iota of interest in schooling beyond the study of scripture and prayer. Fortunately, that amply met the job requirements of his post as a priest at the Dakshineswar Kali Temple. According to numerous firsthand, contemporaneous accounts, Ramakrishnaâ€”who is revered as a saint in much of India and as an avatar by manyâ€”spent a good deal of his short life in samadhi, or an ecstatic state. On a daily basis, sitting or standing, he was often observed slipping into a transported state that he described as "God consciousness," existing with neither food nor sleep. He died in 1886 at age 50.

Though Ramakrishna spoke in a village idiom, invoking homespun local parables, word about the "Bengali saint" spread through the chattering classes of India in the 1870s like a monsoon. Many who flocked to himâ€”and declared him a divine incarnationâ€”were educated as lawyers, doctors and engineers and were often the graduates of British-run Christian schools. His closest and most influential disciple, however, was Vivekananda (born Narendranath Datta in 1863 to an affluent family), whom he charged with carrying the message of Vedanta to the world.

Certainly, a smattering of Eastern thought had already traveled to the West before Vivekananda's arrival in the U.S. In the 1820s, Ralph Waldo Emerson had snared a copy of the Bhagavad Gita and found himself enchanted. "I owed a magnificent day to the Bhagavad Gita," Emerson wrote in his journal in 1831. The Gita would inform his Transcendentalist essays, in which he wrote of the "Over-Soul," that part of the individual that is one with the universeâ€”invoking the Vedantic precepts of the Atman and Brahman. (In a tidy historical twist, one of Emerson's relatives, Ellen Waldo, became a devotee of Vivekananda, and faithfully transcribed the dictated text of his first book, "Raja Yoga," in 1895.)

Emerson's student and fellow Transcendentalist, Henry David Thoreau, would study Indian thought even more avidly and crafted his own practiceâ€”living as a secular monk, as it were, by Walden Pond. In 1875, Walt Whitman was given a copy of the Gita as a Christmas gift, and it is heard unmistakably in "Leaves of Grass" in lines such as "I pass death with the dying and birth with the new-wash'd babe, and am not contained between my hat and my boots." Though the two never met, Vivekananda