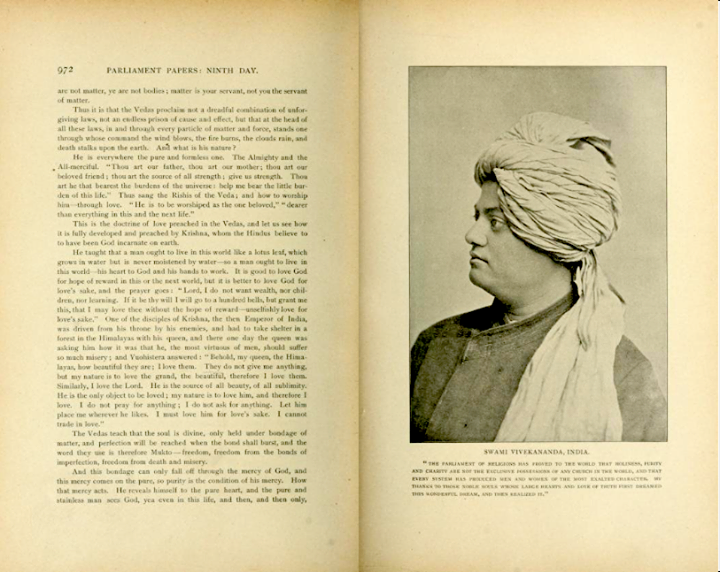 Digital Rare Book:
The World's Parliament of Religions
An illustrated and popular story of the World's first parliament of religions, held in Chicago in connection with the Columbian exposition of 1893
By John Henry Barrows
Published by The Parliament Publishing Company, Chicago - 1893
Volume 2

The Parliament of the World's Religions opened on 11 September 1893 at the Art Institute of Chicago as part of the World's Columbian Exposition. On this day, Vivekananda gave a brief speech representing India and Hinduism. He was initially nervous, bowed to Saraswati (the Hindu goddess of learning) and began his speech with "Sisters and brothers of America!". At these words, Vivekananda received a two-minute standing ovation from the crowd of seven thousand. According to Sailendra Nath Dhar, when silence was restored he began his address, greeting the youngest of the nations on behalf of "the most ancient order of monks in the world, the Vedic order of sannyasins, a religion which has taught the world both tolerance, of and universal acceptance". Vivekananda quoted two illustrative passages from the "Shiva mahimna stotram": "As the different streams having their sources in different places all mingle their water in the sea, so, O Lord, the different paths which men take, through different tendencies, various though they appear, crooked or straight, all lead to Thee!" and "Whosoever comes to Me, through whatsoever form, I reach him; all men are struggling through paths that in the end lead to Me." According to Sailendra Nath Dhar, "it was only a short speech, but it voiced the spirit of the Parliament."

Parliament President John Henry Barrows said, "India, the Mother of religions was represented by Swami Vivekananda, the Orange-monk who exercised the most wonderful influence over his auditors". Vivekananda attracted widespread attention in the press, which called him the "cyclonic monk from India". The New York Critique wrote, "He is an orator by divine right, and his strong, intelligent face in its picturesque setting of yellow and orange was hardly less interesting than those earnest words, and the rich, rhythmical utterance he gave them". The New York Herald noted, "Vivekananda is undoubtedly the greatest figure in the Parliament of Religions. After hearing him we feel how foolish it is to send missionaries to this learned nation". American newspapers reported Vivekananda as "the greatest figure in the parliament of religions" and "the most popular and influential man in the parliament". The Boston Evening Transcript reported that Vivekananda was "a great favourite at the parliament... if he merely crosses the platform, he is applauded". He spoke several more times "at receptions, the scientific section, and private homes" on topics related to Hinduism, Buddhism and harmony among religions until the parliament ended on 27 September 1893. Vivekananda's speeches at the Parliament had the common theme of universality, emphasising religious tolerance. He soon became known as a "handsome oriental" and made a huge impression as an orator.

Sponsorship of Swami Vivekananda for Parliament of the World's Religions:

In 1892, Swami Vivekananda stayed with Bhaskara Sethupathy, who was a Raja of Ramnad, when he visited Madurai and he sponsored Vivekananda's visit to Parliament of the World's Religions held in Chicago.

Handsome Oriental he is ...no doubt