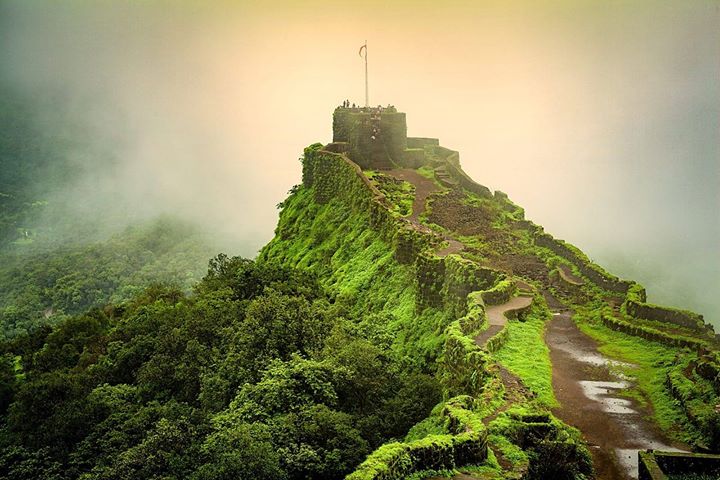 This fortress played a key role in the battle that would ultimately give rise to the Maratha Empire.

The fortress of Pratapgad was completed in 1656 under the orders of the Maratha king Chhatrapati Shivaji. The construction of the hilltop stronghold turned out to be an inspired piece of strategy, as just three years later it played a pivotal role in the Battle of Pratapgad, a turning point for the fledgling Maratha.

In the 1650s, the young Maratha king Chhatrapati Shivaji Maharaj ordered his peshwa, or prime minister, Moropant Trimbak Pingle, to oversee the construction of a strategic fort in the Western Indian state of Maharashtra. Built on a high spur and completed in 1656, the new two-level fort of Pratapgad (meaning â€œValour Fortâ€) was ideally placed to defend the banks of the Nira and Koyna rivers and the strategic Par pass.

It was a judicious move by Shivaji, as just three years later the renowned Adilshahi general Afzal Khan was marching on Pratapgad, intent on destroying the Marathas. In the summer of 1659, Afzal Khan trampled through Maratha territory, destroying temples in an attempt to bait Shivaji, to draw him out of Pratapgad onto flat land more suitable for an engagement.

Shivaji, however, was not so easily drawn, despite his desire to avenge his brother, who was killed treacherously by Afzal Khan in a previous battle. The Maratha had never won a significant military engagement with a major regional power, and Shivaji was well aware that he was heavily outnumbered by the Adilshahi.

Afzal Khan approached Pratapgad with more than 20,000 cavalry, 15,000 infantry, 1,500 musketeers, 80 cannons, 1,200 camels and 85 elephants. Shivaji had about 6,000 light cavalry, 3,000 light infantry, and 4,000 reserved infantry. The only advantage the Maratha held was in Pratapgad, behind whose walls they camped, and the thick forests and steep hills that surrounded it.

Before any battle was fought, however, tradition dictated that both leaders must first meet to discuss a peaceful resolution. The two men agreed to meet on November 9, 1659, but neither man trusted the other. They both carried concealed weapons and kept bodyguards nearby.

They met in a tent between the two armies. As the two men approached each other, Afzal Khan went to embrace Shivaji. As he did so, he drew a knife from inside his coat and tried to stab his enemy in the back. Shivaji, however, was wearing armor beneath his clothes, which protected him from the treacherous attack. Shivaji then pulled out his bagh nakhâ€”a claw-like weapon designed to fit in the handâ€”and sliced Afzal Khan across the abdomen, cutting into his organs.

The Khan fled in agony, crying out to his men that he had been attacked. The two sets of bodyguards engaged each other, buying time for their generals to escape back to their own lines. But Shivajiâ€™s lieutenant went after Afzal Khan as he was carried away by his servants. He caught up with the Khan and beheaded him, and his head was later sent to Shivajiâ€™s mother as a trophy.

As the injured Shivaji made his way back up to Pratapgad, he gave the order for his forces, many of whom were hidden in the forests below the fort, to strike. They flooded down the slopes, catching the Adilshahi off guard. Two groups of Maratha infantry fell upon the surprised musketeers and hit the flanks of the stunned infantry, while their cavalry charged into the mounted Adilshahi.

The Adilshahi retreated and the Maratha army gave chase, pushing their enemies ever further from Pratapgad and eventually capturing 23 Adilshahi forts. Shivajiâ€™s victory at the Battle of Pratapgad was a mighty signal of intent, and became the seed from which the Maratha Empire would soon grow.

Pratapgad remained an important strategic fort for the Maratha Empire. In the years following the battle, small temples were built inside the military stronghold. And many years later, in 1957, a 17-foot-tall equestrian bronze statue of Shivaji was erected at Pratapgad by the prime minister of India.

As for the treacherous Afzal Khan, the noble Shivaji had him buried with full military honorsâ€”a practice befitting his stationâ€”at the foot of Pratapgad fort, where his mausoleum still lies today. It has since become a local shrine for the areaâ€™s Muslims, and a source of some controversy.

Harpreet Singh Grover u seen this?