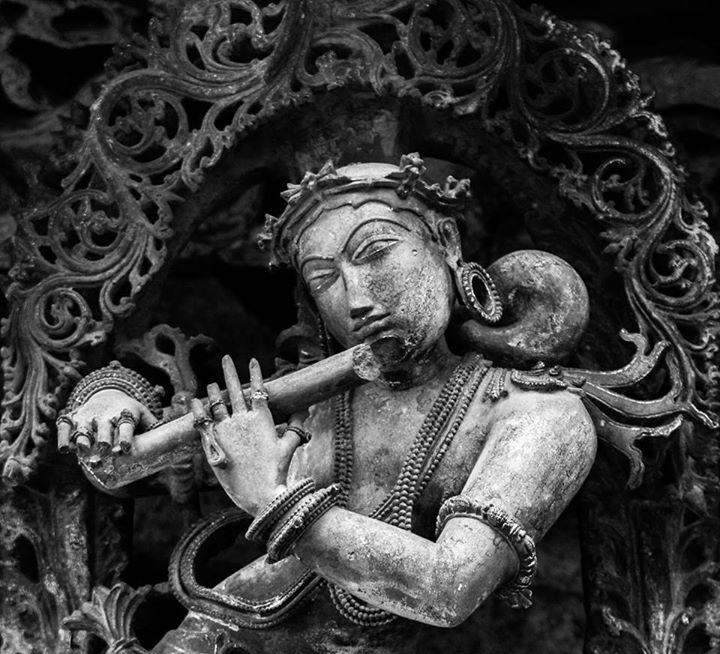 In India, the study of aesthetics â€” which was at first restricted to the dramaâ€”draws its origin from no abstract or disinterested desire for knowledge but from motives of a purely empirical order. The most ancient text that has come down to us is the Natyashastra (4th or 5th Century A. D. ?), ascribed to the mythical Bharata. This is a voluminous collection of observations and rules concerned in the main with the production of drama and the training of actors and poets. The author, or the authors, with a certain sententiousness and pedantry typical of Indian thought, classify the various mental states or emotions of the human soul and treat of their transition from the practical to the aesthetic plane. The Natyashastra is a work of deep psychological insight. Drama appeals to sight and hearing at the same time (the only senses that are capable, according to some Indian thinkers, of rising above the boundaries of the limited â€œ I â€) and is then considered the highest form of art. In it both sight and hearing collaborate in arousing in the spectator, more easily and forcibly than by any other form of art, a state of consciousness sui generis , conceived intuitively and concretely as a juice or flavour, called Rasa. This typically Indian conception of aesthetic experience as a juice or a taste savoured by the reader or spectator should not surprise us. In India, and elsewhere, sensations proper to the senses of taste and touch, almost devoid of any noetic representation, are easily taken to designate states of consciousness more intimate and removed from abstract representations than the ordinary oneâ€”that is the aesthetic experience and various forms of religious ones.

This Rasa, when tasted by the spectator, pervades and enchants him. Aesthetic experience is, therefore, the act of - tasting this Rasa, of immersing oneself in it to the exclusion of all else. Bharata, in a famous aphorism which, interpreted and elaborated in various ways, forms the point of departure of all later Indian aesthetic thoughts, says, in essence, that Rasa is born from the union of the play with the performance of the [actors. â€œ Out of the union of the Determinantsâ€”he says literallyâ€”, the Consequents and the Transitory Mental States, the birth of Rasa takes placeâ€. What is then the nature of â€™Rasa ? What are its relations with the other emotions and states of consciousness ? And how are we to understand this word â€œ birth â€ ? The whole of Indian aesthetics hinges on such questions, which have been an inexhaustible source of polemic material to generations of rhetors and thinkers, down to our own days. But, before undertaking an examination of their various interpretations, let us briefly expound here the essentials of the empirical psychology of Bharata.

According to the Natyashastra, eight fundamental feelings, instincts, emotions or mental states called bhava or sthayibhava can be distinguished in the human soul : Delight (rati), Laughter (hasa), Sorrow (soka). Anger (krodha), Heroism (utsaha). Fear (bhaya ), Disgust ( jugupsa ), and Wonder ( vismaya ). These eight states are inborn in manâ€™s heart. They permanently exist in the mind of every man, in the form of latent impressions derived from actual experiences in the present life or inherited instincts, and, as such, they are ready to emerge consciousness on any occasion.