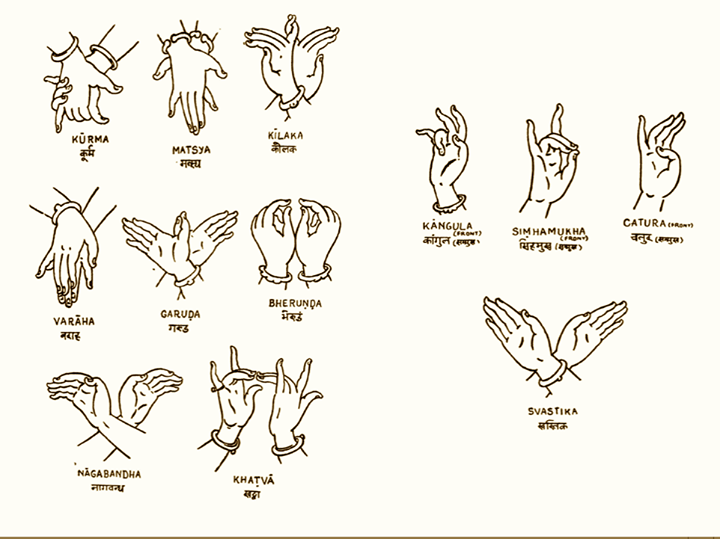 Digital Book :
The Mirror of Gesture - Being the Abhinaya Darpana of Nandikesvara
Translated into English
By Ananda Kentish Coomaraswamy and
Gopala Kristnayya Duggirala
Published by Harvard University Press - 1917

Certain of the dance poses possess not merely a general linguistic, but also a special hieratic significance. These poses, chiefly of the hands, are spoken of as mudras (seals), and are more or less familiar to students of Hindu iconography. It is, however, scarcely realised how closely connected are the dancing and the sculpture. Many of the gods are themselves dancers, and, in particular, the everlasting operation of creation, continuance, and destruction — the Eternal Becoming, informed by All pervading Energy — is marvellously represented in the dance of Siva.' He also exhibits dances of triumph and of destruction. Kali, ; likewise, dances in the burning ground, which we understand to signify the heart of the devotee made empty by renunciation. Sri Krishna dances a dance of triumph following the victory over Kaliya, and another General Dance, with the milkmaids of Brindaban, who are the souls of men.

Most of the dances just mentioned, however, except the Rasa Mandala or General Dance last spoken of, are Tandava dances and represent a direct cosmic activity. Those of the Nrtya class, which set forth in narrative fashion the activities of Gods and Titans, or exhibit the relationships of hero and heroine " so as to reveal an esoteric meaning", are for the most part Lasya dances performed by the Apsaras of Indra's paradise, and by the Devadasis and Nacnis upon earth. It will be seen that in all cases the dance is felt to fulfil a higher end than that of mere entertainment: it is ethically justified upon the groimd that it subserves the Four Ends of life, and this view of Natya is plainly stated in Tiruvenkatacari's preface translated below. The arts are not for our instruction, but for our delight, and this delight is something more than pleasure, it is the godlike ecstasy of liberation from the restless activity of the mind and the senses, which are the veils of all reality, transparent only when we are at peace with ourselves. From the love of many things we are led to the experience of Union: and for this reason Tiruvenkatacari does not hesitate to compare the actor's or dancer's art with the practice of Yoga. The secret of all art is self-forgetfulness.

Do you have any platform for people who want to translate such books to other languages and promote it to different regions?

Sooraj Subramaniam, check it out!