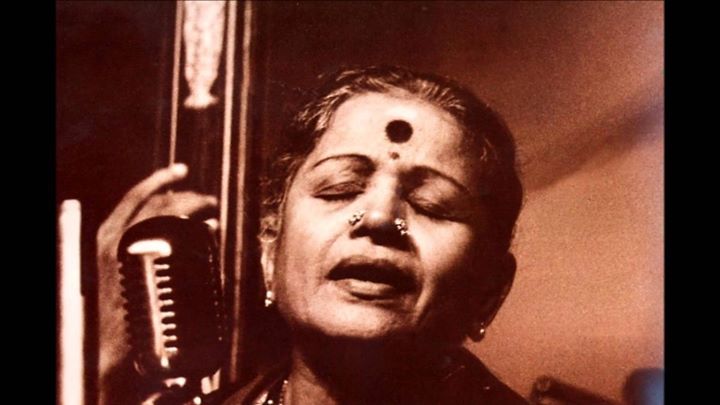 Essay:
From Mahatma Gandhi to Nehru, everyone was an MS Subbulakshmi fan
By Vikram Sampath
Published in The Print - 6 July, 2019

In 1926, a shy girl dressed in a traditional Tamilian attire of silk paavadai and davani, her thick curls pressed down with copious oil and a generous vermillion dot marking most of her forehead, made her way to the studios of the Twin Recording Company in Madras (now Chennai). She was all of 10 then. In a high-pitched voice, she sang a Tamil song â€˜Maragatha Vadivuâ€™ in raga Senjurutti.

Inspired by the gramophone, she would often sing into a rolled piece of paper, imagining it to be the recording horn.

Despite the primitive technology in the 1920s, the cadence and lilt in the voice was unmissable in the record.

This girl would grow up to become the voice of an entire nation, the nightingale of India, in front of whom heads of state, poets, politicians and the masses bowed in reverence. She was Madurai Shanmukhavadivu Subbulakshmi â€“ M.S. Subbulakshmi or M.S. Amma to many.

Born 16 September 1916, Kunjamma, as she was called lovingly at home, was the second child of Shanmukhavadivu of Madurai, who came from a traditional devadasi family and was a well-established veena player of her times. The family lived close to the Meenakshi Temple at the Upper Hanumantharayan Koil Street. Shanmukhavadivu too had cut a few records, playing the veena and singing along.

Apart from her mother â€“ Kunjamma would often go with her mother to concerts and was part of the chorus â€“ she found several other music teachers in her early years, like Madurai Srinivasa Iyengar and Mayavaram Krishna Iyer, who visited her house.

Her first informal stage appearance remained etched in her memory. In an interview Subbulakshmi said: â€œWhen it happened, I felt only annoyance at being yanked from my favourite game â€“ making mud pies. Someone picked me up, dusted my hands and skirt, carried me to the nearby Sethupati School where my mother was playing before 50 to 100 people. In those days that was the usual concert attendance. At motherâ€™s bidding, I sang a couple of songs. I was too young for the smiles and the claps to mean much. I was thinking more of returning to the mud.â€

The family soon moved to Madras after her stunning public debut at the Mahamakham festival in Kumbakonam in 1932.

At 17, she debuted at the Madras Music Academy. She was filling in for an ailing Ariyakudi Ramanuja Iyengar who had to cancel his concert. Carnatic music stalwarts in the audience, such as Chembai Vaidyanatha Bhagavathar and â€˜Tigerâ€™ Varadachariar, were captivated by what they heard. Karaikudi Sambasiva Iyer told her that she carried the veena in her throat.

With this, M.S. Subbulakshmi announced her arrival on the Carnatic music stage. Recordings of that time are a testament to her musical prowess.

Popular Tamil weekly Ananda Vikatan did a special feature on her in 1936. Soon after, people started attending her performances in large numbers.

But it was the making of this article that changed her life forever. The advertising manager of the weekly, T. Sadasivam, was assigned the task of working on a feature about a young, rising musician.

His meetings with Subbulakshmi for the article led to a long-lasting relationship between the two. Subbulakshmiâ€™s mother was against the relationship, prompting the young musician to elope and land straight at much-married Sadasivamâ€™s home in Triplicane, Madras.

Sadasivam was the man who helped Subbulakshmi polish and refine her craft â€“ some critics even accuse him of making the singer lose her individuality to a great extent.

But he was a man on a mission. He knew Subbulakshmi was meant for bigger things. From becoming her manager for concerts to swinging deals in her favour for lead roles in Tamil cinema, Sadasivam had it all planned.

He coaxed well-known filmmaker K. Subrahmanyam, who had bought the rights of the Tamil translation of Premchandâ€™s novel Seva Sadan that was published in Ananda Vikatan as Sevasadanam, to cast Subbulakshmi as the female lead in the film.

The film was titled Sevasadanam and released in 1938. It delivered a powerful message on women empowerment and was a huge success. Subbulakshmi became a darling of the masses. Renowned composer Papanasam Sivan gave music for the film.

She next appeared in the film Sakuntalai (1940), based on Kalidasaâ€™s famous play, where she played the central character. Carnatic vocalist G.N. Balasubramaniam (G.N.B.) played King Dushyanta in the movie.

The songs from the film in Subbulakshmiâ€™s golden voice were as much a hit as the film.

The film also sparked rumours of an affair between Subbulakshmi and Balasubramaniam. T.J.S. George in his book M.S.: A Life in Music refers to the many love letters exchanged between the two singers. How this affair ended has been a subject of much gossip. But soon, Subbulakshmi got married to Sadasivam on 10 July 1940, after his previous wifeâ€™s sudden demise.

The very next year, Subbulakshmi played Narada, a male character, in Y.V. Raoâ€™s film Savithri (1941). Among the many popular songs from the film is â€˜Bruhi Mukundethiâ€™.

The voice of devotion

Her last film, Meera, made her something of a national superstar. The movie released in Tamil in 1945 and in Hindi in 1947. The Prime Minister of Independent India, Jawaharlal Nehru, is said to have attended the premiere along with the Mountbattens.

She would eventually join the inner circle of friends of several prime ministers and presidents of the country.

Also read: Kesarbai Kerkar, the Indian voice that made it to NASAâ€™s Voyager mission

The portrait of the medieval Rajput queen-turned-saint reflected Subbulakshmiâ€™s own transition from a Carnatic singer to a voice of piety and devotion for an entire nation. One of its evergreen songs, sung by her, is Kaatrinilae Varum Geetham.

Then-Maharana of Udaipur was so moved by her performance in this film that he is believed to have told Sadasivam: â€œIn the old days I would have exchanged my whole kingdom for this Kalyani raga. Now I shall give you whatever help you need by way of horses and elephants in locationâ€.

Her music won her several admirers, including Mahatma Gandhi who implored her to sing some of his favourite bhajans, such as Raghupati Raghava Raja Ram and Vaishnava Janato.

While much has been said about Subbulakshmi, a once-in-many-generations artiste who got the Bharat Ratna in 1998, this piece offers a glimpse of her early life, before she became â€˜THEâ€™ M.S. Subbulakshmi.

That was the power of M.S. Subbulakshmiâ€™s music, a titan among the greats in Carnatic music.

I am also her great fan.my morning starts with her vishnu shahasra naam

UNITED NATIONS: The UN released a postage stamp to honour India's most celebrated carnatic music artist MS Subbulakshmi, who had performed at the world body 50 years ago. The USD 1.20 value commemorative stamp, issued by the UN Postal Administration in Ms Subbulakshmi's honour, has the iconic blue emblem of the UN alongside her picture. This year also marks her birth centenary. The stamp was released at a special ceremony at the UN headquarters to mark India's ratification of the historic Paris climate deal. It was attended by several dignitaries who hailed the country's move to combat global warming. The ceremony concluded with a soulful rendition by carnatic music singer Sudha Raghunathan of Subbulakshmi's music as well as of Gandhi's beloved 'Ram Dhun'. Ms Raghunathan performed songs in seven languages, including Bengali, and received a

UNITED NATIONS: The UN today released a postage stamp to honour India's most celebrated carnatic music artist MS Subbulakshmi, who had performed at the world body 50 years ago. The USD 1.20 value commemorative stamp, issued by the UN Postal Administration in Ms Subbulakshmi's honour, has the iconic blue emblem of the UN alongside her picture. This year also marks her birth centenary. The stamp was released at a special ceremony at the UN headquarters to mark India's ratification of the historic Paris climate deal. It was attended by several dignitaries who hailed the country's move to combat global warming. The ceremony concluded with a soulful rendition by carnatic music singer Sudha Raghunathan of Subbulakshmi's music as well as of Gandhi's beloved 'Ram Dhun'. Ms Raghunathan performed songs in seven languages, including Bengali, and received a