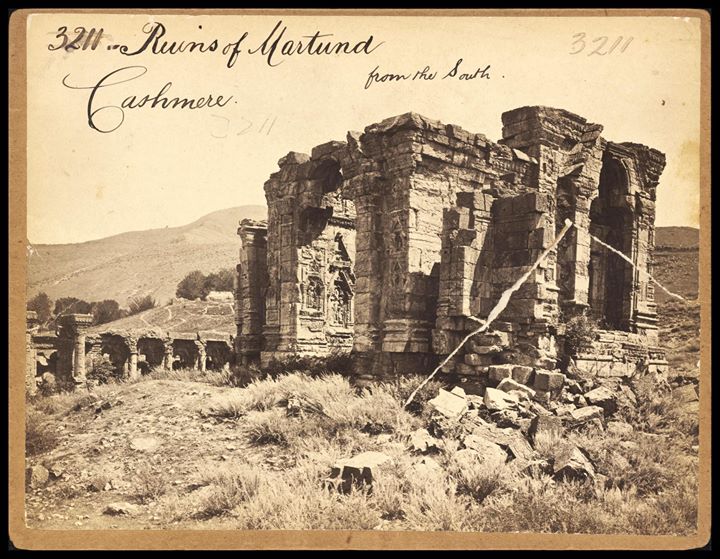 Essay:
Legacy Of Kashmir, The Forgotten Land Of Beauty And Knowledge â€” Part I
By Professor Subhash Kak
Published in Swarajya - August 06, 2016

This is the first essay in a four-part series about the important contributions of Kashmir to Indian culture. It throws light on the early history of the region and the expertise of the Kashmiris in the areas of grammar, music and dance.

This is the first essay in a four-part series about the important contributions of Kashmir to Indian culture. It throws light on the early history of the region and the expertise of grammarians Panini and Patanjali, and Bharata Muni in music and dance.

Kashmirâ€™s geographical location partly explains its cultural history. It may be that its natural beauty and temperate climate are the reasons that Kashmiris have a strong tradition in the arts, literature, painting, drama and dance. Its relative isolation, the security provided by the ring of mountains around it, and its distance from the heartland of Indian culture in the plains of North India might explain the originality of Kashmiri thought. Its climate and the long winters may explain the Kashmiri fascination for philosophical speculation.

Kashmir is at the centre of the Puranic geography. In the Puranic conception, the earthâ€™s continents are arranged in the form of a lotus flower. Mt Meru stands at the center of the world, the pericarp or seed-vessel of the flower, as it were, surrounded by circular ranges of mountains. Around Mt Meru, like the petals of the lotus, are arranged four island-continents (dvipas), aligned to the four points of the compass: Uttarakuru to the north, Ketumala to the west, Bhadrashva to the east and Bharata or Jambudvipa to the south. The meeting point of the continents is the Meru mountain, which is the high Himalayan region around Kashmir, Uttarakuru represents Central Asia including Tocharia, Ketumala is Iran and lands beyond, Bhadrashva is China and the Far East. Kashmirâ€™s centrality in this scheme was a recognition that it was a meeting ground for trade and ideas for the four main parts of the Old World. In fact, it became more than a meeting ground; it was the land where an attempt was made to reconcile opposites by deeper analysis and bold conception.

Kashmirâ€™s nearness to rich trade routes brought it considerable wealth and emboldened Kashmiris to take Sanskrit culture out of the country as missionaries. Kashmiris also became interpreters of the Indian civilisation and they authored many fundamental synthesising and expository works. Some of these works are anonymous encyclopaedias; in many other works, the authorâ€™s name is known but the details of the life and circumstances in Kashmir are hardly remembered.

Kalhanaâ€™s Rajatarangini (River of Kings), written in about 1150 AD, provides a narrative of successive dynasties that ruled Kashmir. Kalhana claimed to have used eleven earlier works as well the Nilamata Purana. Of these earlier books, only the Nilamata Purana survives. The narrative in the Rajatarangini becomes more than mere names with the accession of the Karkota dynasty in the early seventh century.

The political boundaries of Kashmir have, on occasion, extended much beyond the valley and the adjoining regions. According to Hiuen Tsang, the Chinese traveller, the adjacent territories to the west and south down to the plains were also under the direct control of the king of Kashmir. With Durlabhavardhana of the Karkota dynasty, the power of Kashmir extended to parts of Punjab and Afghanistan. It appears that during this period of Kashmiri expansion the ruling elite, if not the general population, of Gilgit, Baltistan, and West Tibet spoke Kashmiri-related languages. Later, as Kashmirâ€™s political power declined, these groups were displaced by Tibetan speaking people.

In the eighth century, Lalitaditya Muktapida (reigned 724-760 AD), conquered most of North India, Central Asia and Tibet. His vision and exertions mark a new phase of Indian empire-building. Kashmir had become an important player in the rivalries amongst the various kingdoms of North India.

The jostling of the Kashmiri State within the circle of the North Indian powers led to an important political innovation. The important Vishnudharmottara Purana, believed to have been written in Kashmir of the Karkota kings, recommends innovations regarding the rajasuya and the ashvamedha sacrifices, of which the latter in its medieval interpretations was responsible for much warfare amongst kings. In the medieval times, the horse was left free to roam for a year and the kingâ€™s soldiers tried to establish the rule of their king in all regions visited by the horse, leading to clashes. The Vishnudharmottara Purana replaced these ancient rites by the rajyabhisheka (royal consecration) and surapratishtha (the fixing of the divine abode) rites.

This essay presents an overview of the most important Kashmiri contributions to Indian culture, emphasising some of the lesser known aspects of these contributions. Specifically, we consider the contributions to the arts, sciences, literature and philosophy. Our historical assessment of Kashmiri culture is hampered by the nature of our records. The texts and objects of art do not always indicate their provenance and the connections with Kashmir emerge only from indirect evidence. We are on sure ground when we come to Buddhist sources, the texts of the Kashmir Shaivism, and the names mentioned in the Rajatarangini and other early narratives.

During the Vedic period, Kashmir appears to be an important region because it appears that the Mujavant mountain, the region where Soma grew, was located there. It is possible that in the Vedic era a large part of the valley was still under a lake. Kalhanaâ€™s history begins with the Mahabharata War, but it is very hazy with regard to the events prior to the Mauryan Emperor Ashoka.

The great grammarian Panini lived in northwest Punjab, not too far from Kashmir and the university at Taxila (Takshashila) was also close to the valley. At the time of Hiuen Tsang, Takshashila was a tributary to Kashmir. It is generally accepted that Patanjali, the great author of the Mahabhashya commentary on Paniniâ€™s Ashtadhyayi, was a Kashmiri, as were a host of other grammarians like Chandra. According to Bhartrihari and other early scholars, Patanjali also made contributions to Yoga (the yoga-sutras) and to Ayurveda.

It is believed that Patanjaliâ€™s mother was named Gorika and he was born in Gonarda. He was educated in Takshashila and he taught in Pataliputra. From the textual references in his works, it can be safely said that he belonged to second century BC. The Charaka Samhita of Ayurveda that has come down to us is due to the editing of Dridhabala from Kashmir, who also added 17 chapters to the sixth section and the whole of the eighth section. Patanjali may have been involved in this editing process. But it is likely that the identity of the Kashmiris as a distinct group had not solidified in the Vedic period and to speak of ethnicity at that time is meaningless.

In any event, Kashmir of these early times was a part of the larger northwest Indian region of which Takshashila was a center of learning. The early levels of buildings in Takshashila have been traced to 800 BC. The first millennium BC was a period of great intellectual activity in this part of India and attitudes that later came to be termed Kashmiri were an important element of this activity. Amongst these attitudes was a characteristic approach to classification in the arts, and the interest in grammar.

Paniniâ€™s grammar remains one of the greatest achievements of the human intellect. It described the grammar of the Sanskrit language by a system of 4,000 algebraic rulesâ€” a feat that has not been equalled for any other language to this day. It also set the tone for scientific studies in India with their emphasis on algorithmic explanations. Patanjaliâ€™s commentary on the Panini grammar was responsible for the exaltation of its reputation. It appears that Panini arose in the same intellectual climate that characterised Kashmir during its Classical period.

Drama And Music: The Natyasastra

An early name seen as belonging to Kashmir is Bharata Muni of the Natyasastra. The indirect reasons for this identification are that the rasa idea of the Natyasastra was discussed by many scholars in Kashmir. Another reason is that the Natyasastra has a total of 36 chapters and it is suggested that this number may have been deliberately chosen to conform to the theory of 36 tattvas which is a part of the later Shaivite system of Kashmir. Many descriptions in this book seem especially true for Kashmir. The bhana, a one-actor play described by Bharata, is still performed in Kashmir by groups called bhand pather (bhana patra, in Sanskrit).

It should be mentioned here, parenthetically, that a few scholars take Bharata to be a Southerner. It is also interesting that there exist some very close connections between Kashmir and South India, in the cultural tradition, like the worship of Shiva, Pancharatra, Tantra and the arts. Recently, when I pointed this out to Vasundhara Filliozat, the art historian who has worked on Karnataka, she said that the inscriptional evidence indicates a continuing movement of teachers from Kashmir to the South, and that Kashmir is likely to have been the original source of many of the early Shaivite, Tantric and Sthapatya Agamas.

Bharata Muniâ€™s Natyasastra not only presents the language of creative expression, it is the worldâ€™s first book on stagecraft. It is so comprehensive that it lists 108 different postures that can be combined to give the various movements of dance. Bharataâ€™s ideas are the key to proper understanding of Indian arts, music and sculpture. They provide an insight into how different Indian arts are expressions of a celebratory attitude to the universe. Manomohan Ghosh, the modern translat

The contribution of Kashmir in literature and Art has been immense.Even Buddhism was spread by Kashmiri scholars in China .In Musicology and dramaturgy , the Kashmir connection is vividly seen .Abhinavgupt worked on Natyashastra of Bharatmuni and studied Dhvani .He added some aspects .Even in Vaishnavism, Kashmir produced one of the Mahapodhaya of this sect and he was it's 33rd head.

The ruins of Martand Sun Temple located 64-km south-east of Srinagar should be stamped prominently on the tourist map of Jammu and Kashmir. Tourists who flock to popular destinations like Pahalgam and Aru Valley should make a point of visiting the Sun Temple of Martand, which lies in district Anantnag. The place is covered in snow during winters.

Preeksha Malhotra give it a read

Kashmir is integral part of India.