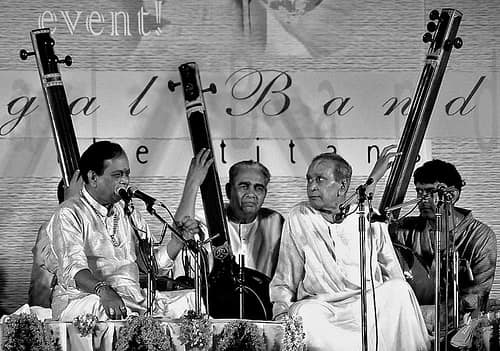 Is that â€˜Much Ado About Nothing?â€™ No certainly notâ€¦as both the basic types of Indian Classical Music, i.e. North Indian classical music and Carnatic Classical Music have some fundamental variations. Today, instead of using long-winded narration, I would prefer tabular form to explain the same, which Iâ€™m sure, is easier to understand.

Before the 13th century, India had a unique classical music. Yet, thereafter Classical Music was divided into two different styles. In North India, Persian and Mughal authority started making its place powerfully with Amir Khusro. Tansen and his existing musicians typically presented in Dhrupad style and soon after Khayal singing was made famous by Sadarang-Adarang. And many Gharanas (Schools) in diverse regions of India developed.

In contrast, Saint Purandardas, Tyagraja, Muthuswamy Dikshitar and Shyama Shashtri had a great influence in the development of Carnatic Music. These days, most of the classical training orbits around Kritis by these saint musicians. But it is not sure when and why the Violin was launched in Carnatic Classical Music? Certainly itâ€™s not an Indian instrument, but is very popular complementary instrument with Carnatic Classical singers.

Contrasting North Indian classical music, Carnatic classical music does not stick to Time concepts and as a replacement for Thaats, Carnatic music uses the Melakarta theory. Carnatic ragas vary from Hindustani ragas. The names of ragas are also different. Yet, there are some ragas with the same scale as Hindustani ragas but with the different names; e.g. Hindolam and Malkauns, Shankarabharanam and Bilawal. I think it is very difficult to understand theoretically but I am sure you get it easily with below video. There is same Raga sung in different style one is Carnatic style by Vidvan Balamurali and another is Hindustani style by Pandit Bhimsen Joshi. Enjoy it!

Two rare books on the subject by Einstein's friend in Bombay, Walter Kaufmann - (a) Ragas of North India (b) Ragas of South India - are noteworthy. His classic composition - still the signature opening tune of Doordarshan & AIR - is a a blend of North meets South. ( https://maddy06.blogspot.com/2011/10/walter-kaufmann.html )