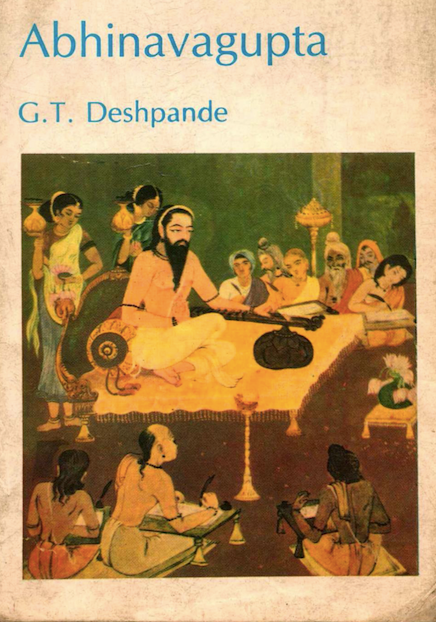 Abhinavagupta (c. 950 â€“ 1016 AD[1][2]) was a philosopher, mystic and aesthetician from Kashmir. He was also considered an influential musician, poet, dramatist, exegete, theologian, and logician â€“ a polymathic personality who exercised strong influences on Indian culture.

He was born in Kashmir in a family of scholars and mystics and studied all the schools of philosophy and art of his time under the guidance of as many as fifteen (or more) teachers and gurus. In his long life he completed over 35 works, the largest and most famous of which is TantrÄloka, an encyclopedic treatise on all the philosophical and practical aspects of Kaula and Trika (known today as Kashmir Shaivism). Another one of his very important contributions was in the field of philosophy of aesthetics with his famous AbhinavabhÄratÄ« commentary of NÄá¹­yaÅ›Ästra of Bharata Muni.

"Abhinavagupta" was not his real name, rather a title he earned from his master, carrying a meaning of "competence and authoritativeness". In his analysis, Jayaratha (1150â€“1200 AD) â€“ who was Abhinavagupta's most important commentator â€“ also reveals three more meanings: "being ever vigilant", "being present everywhere" and "protected by praises". Raniero Gnoli, the only Sanskrit scholar who completed a translation of TantrÄloka in a European language, mentions that "Abhinava" also means "new", as a reference to the ever-new creative force of his mystical experience.

From Jayaratha, we learn that Abhinavagupta was in possession of all the six qualities required for the recipients of the tremendous level of Å›aktipÄta, as described in the sacred texts (ÅšrÄ«pÅ«rvaÅ›Ästra): an unflinching faith in God, realisation of mantras, control over objective principles (referring to the 36 tattvas), successful conclusion of all the activities undertaken, poetic creativity and spontaneous knowledge of all disciplines.

Abhinavagupta remained unmarried all his life,[41] and as an adept of Kaula, at least initially maintained brahmacharya and supposedly used the vital force of his energy (ojas) to deepen his understanding of the spiritual nervous system he outlined in his worksâ€”a system involving ritual union between Purusha as (Shiva) and Shakti. Such union is essentially non-physical and universal, and thus Abhinavagupta conceived himself as always in communion with Shiva-Shakti. In the context of his life and teachings, Abhinavagupta parallels Shiva as both ascetic and enjoyer.

He studied assiduously at least until the age of 30 or 35. To accomplish that he travelled, mostly inside Kashmir. By his own testimony, he had attained spiritual liberation through his Kaula practice, under the guidance of his most admired master, ÅšambhunÄtha.

He lived in his home (functioning as an ashram) with his family members and disciples, and he did not become a wandering monk, nor did he take on the regular duties of his family, but lived out his life as a writer and a teacher. His personality was described as a living realisation of his vision.

In an epoch pen-painting he is depicted seated in Virasana, surrounded by devoted disciples and family, performing a kind of trance-inducing music at veena while dictating verses of TantrÄloka to one of his attendees â€“ behind him two dÅ«tÄ« (women yogi) waiting on him. A legend about the moment of his death (placed somewhere between 1015 and 1025, depending on the source), says that he took with him 1,200 disciples and marched off to a cave (the Bhairava Cave, an actual place known to this day), reciting his poem Bhairava-stava, a devotional work. They were never to be seen again, supposedly translating together into the spiritual world.

One of the lesser known underrated poets / philosophers... rare collections of abhinavagupta. Thanks for the share