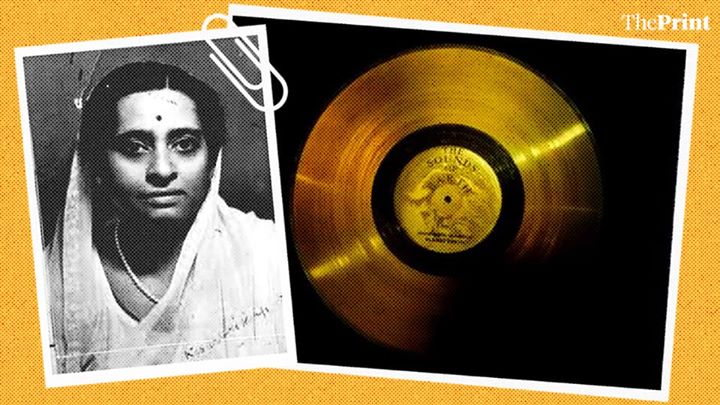 Essay:
Kesarbai Kerkar, the Indian voice that made it to NASAâ€™s Voyager mission
By Vikram Sampath
Published in The Print - 29 June, 2019

Kesarbai Kerkar insisted on removing microphones, loudspeakers from the stage. If something annoyed her, she would cancel the recital midway.

Whatâ€™s the Indian connection to NASAâ€™s space probe Voyager I, which was launched in 1977 and became the first man-made object to enter the interstellar space?

On board the spacecraft is a 12â€inch, gold-plated copper disc with musical compositions, ranging from Beethoven to Bach to Mozart, carefully selected by American astronomer Carl Sagan to reflect the global cultural diversity.

But 42 years later, her rendition of â€˜Jaat kahan ho akeli, goriâ€™ (Where are you going alone, girl) in raga Bhairavi continues to play in the outer space.

The producer of the album, Timothy Ferris, writes:

â€œOne of my favourite musical transitions on the Voyager record comes when â€˜Flowing Streamâ€™ ends and we are transported, quick as a curtsy, across the Himalayas to the north of India and from the sound of one musical genius, Kuan Ping-hu to another, Surshri Kesar Bai Kerkar. This raga is formally designated for morning performance, but its popularity has led to its use as a closing number, a kind of encore, for concerts day and night.â€

Born in July 1892 in Goaâ€™s Keri village, Kesarbaiâ€™s family moved to Kolhapur when she was eight years old. Coming from a traditional family of musicians, she had innate talent. She obtained her initial training from the celebrated Ramakrishna Bua Vaze. Later, sitar maestro Ustad Barkatullah Khan gave her talim for over a year. But it was the Jaipur gharana and its doyen Ustad Alladiya Khan that attracted Kesarbai the most. She started learning under him in 1912 in Bombay (now Mumbai). But the training came to an abrupt end in less than eight months due to the teacherâ€™s ill health and his retirement to Kolhapur. (Journal of The Society of Indian Records Collectors or SIRC, Mumbai)

In 1918, at a concert in Bombay, Kesarbai sang raga Miya Malhar that Barkatullah Khan had taught her. One of the cityâ€™s famous patrons and connoisseurs Seth Vithaldas Dwarkadas was so dissatisfied with her performance that he rebuked her in public. This deeply hurt the young musician and she made up her mind that if she ever pursued music, it would only be under the guidance of Alladiya Khan. Attempts made to persuade Alladiya Khan failed miserably. (SIRC Journal)

It was then that Vithaldas Dwarkadas came to her rescue. Around 1920, he sent a fake message to Alladiya Khan through a telegram, stating that he was seriously ill and the ustad must visit him soon in Bombay.

The latter rushed to Bombay and was furious to find out that this was a trap. He placed stringent conditions before taking Kesarbai as his student. He demanded a fixed monthly salary, payable even if he left Bombay on account of work or health issues. Kesarbai had to pledge to accompany him on tours and learn in transit as well. She was told that the training would be intense, spanning a minimum of 10 years, and that she could perform at a public platform only after she had immersed herself in her music and training. An overjoyed Kesarbai readily agreed.

The formal ganda-bandhan ceremony of taking on a new disciple was held in Bombay on 1 January 1921. A rigorous system of riyaz or training was put in place. Soon, Kesarbai won Alladiya Khanâ€™s trust to such an extent that he deposited all his money with his favourite student and â€˜withdrewâ€™ it when he needed to.

It would not be an exaggeration to say that Kesarbaiâ€™s voice was rare in Hindustani music, with a hefty three-octave range that could effortlessly move from the highest pitch to the deep, lower notes.

It was naturally suited for recording. She often insisted on removing microphones and loudspeakers from the stage. There was a dhrupad-like majesty to her khayal renditions, crafted with immaculate perfection and imagination. Her first concert in Bombay in 1929, after a nearly decade-long training, was enough to make audiences swoon â€“ many walked miles just to listen to her sing. (SIRC Journal)

Being an orthodox musician, Kesarbai was suspicious of the recording medium. She considered it a compromise on the art itself given the limited time available on a record. Her stand was in contrast to the other women musicians who preceded her and easily took to recording. She would often say that her music was not meant for someone sitting in a tea stall and listening to it casually while having a chat.

It was around 1935-1936 that she finally gave in. She recorded for Madrasâ€™ â€˜The Musical Products Limitedâ€™ at Bombayâ€™s Blavatsky Lodge.

The rendition of the khayal â€˜Hu to Jaiyyo piya ke deshâ€™ (You are off to your belovedâ€™s country) in raga Jaunpuri is a classic example of the Jaipur gharana singing style of Kesarbai.

Extensive use of akaars (elongated phrases produced by the syllable â€œaaâ€) and a volley of breathless fast-paced taans, constructed to form a brilliant musical architecture, have come to define the Jaipur gharana singing.

Artiste with a temper

Notorious for her temperamental and abrasive nature, she was quite a terror during concerts. If something annoyed her, she would cancel the recital midway. She was allergic to photographers who disturbed her during a concert and journalists who asked her inane questions.

But she had a wry sense of humour too. In her later years, she suffered from arthritis and found it difficult to stand. Once during the interval of a concert when someone from the audience offered her help, she retorted: â€œAb mera haath pakadke kya karega?â€ (Too late to hold my hand now?) (SIRC Journal)

Musicologist S.R. Mehta of Nadiad remembers how her rendition in raga Sughrai at a 1962 concert in Ahmedabad stumped sarangi player Majeed Khan who had to stop playing as he found it impossible to reproduce her genius on his instrument. (SIRC Journal)

Although she recorded few semi-classical (chaiti) pieces, here is a 1955 recording of a chaiti for The Gramophone Company of India:

In his 2004 lecture on Kesarbai, scholar Ashok Ranade had said: â€œWhole of her life, I felt, was a battle against a kind of puritanism, which she felt she wanted to overcome, yet at the same time she had to live in a particular accepted framework, which indicated and perhaps dictated behaviour of women musicians at that timeâ€¦ she would sit like a male musician would because she felt she was giving something as substantial as a male musician would.â€ (SIRC Journal)

It is often wrongly said that Rabindranath Tagore gave her the title of â€˜Surshreeâ€™. This title was actually awarded to her by a music committee in Calcutta (now Kolkata) in 1948. Tagore had, however, heard her in April 1938 at Santiniketan and called her a â€œborn geniusâ€ whose music â€œis an artistic phenomenon of exquisite perfectionâ€. (SIRC Journal)

Kesarbai won a range of awards, from the Sangeet Natak Akademi award (1953) to Padma Bhushan (1969). She became the first Rajagayika of the Government of Maharashtra (1969). She retired from the stage in 1965 due to her failing health. (SIRC Journal)

Given how she was a traditionalist, it is only apt that this piece ends with her rendition of Kaise Samjhaoon (a 1955 recording) in raga Bhairavi.

I listened the JAUNPURI rendition of "hu to jaiyyo piya ke desh" by pandit Kaivalya Kumar. A marvelous piece. Now listening to Kesarbaiji is pure bliss. Thank you very much for this very useful post.

42 years later, her rendition of â€˜Jaat kahan ho akeli, goriâ€™ (Where are you going alone, girl) in raga Bhairavi continues to play in the outer space.