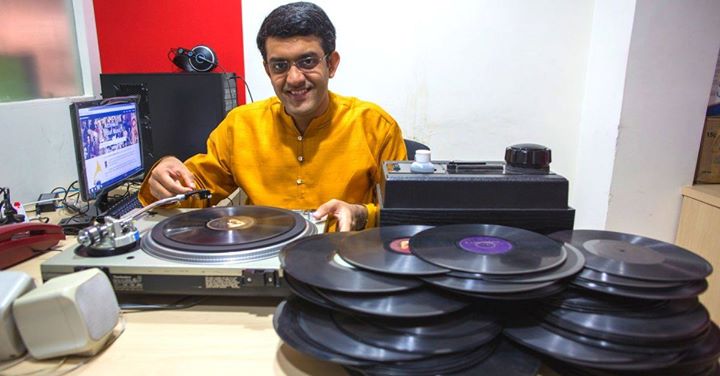 15,000 gramophone records are a part of Archive of Indian Music (AIM) that aims to digitise and preserve some of the rare recordings from the pre-radio era.

At the crack of dawn, Vikram Sampath made his way through the crowd behind the Red Fort. He walked past the colourful roadside stalls selling everything from clothes, shoes, to the best of wrist watches, and stopped right in front of a small shop parked at the corner of the chaotic street.

The kabaadi (scrap) shop hardly had room for one person to sit. Looking at the owner seated on piles of newspapers, cassettes and old gramophone plates, Vikram, an admirer of classical music, felt sad.

As he rummaged through the clutter, he stumbled upon a gramophone record of Mahatma Gandhi. Titled Spiritual Message of Gandhi, the recording was done in London during a round table conference in 1931.

Today, more than 15,000 gramophone records are a part of the Archive of Indian Music (AIM), an organisation started by Vikram to digitise and preserve some of the rare recordings from the pre-radio era.

His collection include artists from music, cinema, theatre, Carnatic classical, and folk, even political rallies during the freedom struggle. From Janki Bai of Allahabad, Gauhar Jaan, Bangalore Nagarathnamma, Mehboob Jaan of Solapur, M S Subbulakshmi, Bhimsen Joshi, and Zohra Bai, several vocalists and musicians can be found at the AIM.

Vikram credits his love for music and initiative to preserve the divine voices recorded in a gramophone to his childhood, parents and maternal grandmother.

Besides music, Vikram grew up on history books. His interest for history would often take him to the Mysore Palace where he would learn about the Wodeyar dynasty, â€œI was spurred by interest to know the stories of Mysoreâ€™s royal family.â€

He studied about one of the longest ruling dynasties for nearly ten years along with juggling his academics in Bengaluru. He joined BITS Pilani and SP Jain (Mumbai) and then went to work at many leading multinational firms before dedicating himself to this project.

However, his near and dear ones encouraged him to utilise the knowledge and write a book on the dynasty. In 2007, his first book, Splendours of Royal Mysore: The Untold Story of the Wodeyars was published.

It was during the research for the book that Vikram learnt about Gauhar Jaan. She was the first Indian voice to be recorded on a gramophone in 1902. Tawaaif Gauhar Jaan had lent her voice to over 600 records and travelled across the world.

For his second book on Gauhar Jahan, Vikram went to Berlin on a visiting Fellowship at the Institute for Advanced Study.

â€œSince she was a tawaaif, there was hardly any material about her in India. In Berlin I chanced upon her recording.. Her recording made me curious about the gramophone plates. I visited multiple Sound Archives in Europe,â€ says the 39-year-old.

He adds, â€œTwo things stood out for me during my researchâ€”all the European countries I visited, had National Sound Archives and secondly, the number of valuable recordings of Indian artists. As a student of music, I would be embarrassed every time someone would ask about Indiaâ€™s music archives since we did not have any.â€

During his six-month fellowship, Vikram learnt the technique of digitising the records and upon his return to India in 2010, he formed an elaborate plan to establish a music archive.

He met several government officials for his proposal but all in vain. Finally it was T V Mohandas Pai (then with Infosys, and now, chairman, Manipal Global Education) who agreed to give Vikram seed funding to set up the archive. His parents came on board as trustees.

He procured the necessary machines and started digitising the songs from the original analogue form of a 78 RPM or a Vinyl disc (EP or LP). The archives are kept in Manipal and the International Institute of Information Technology, Bengaluru.

So far, Vikram has digitised 6,000 plus tracks that are uploaded on SoundCloud so that people can access them from anywhere for free.

Since 2011, he has also curated several exhibitions across India where people listen to the songs.

The response from people has been overwhelming, says Vikram, â€œThere are five lakh followers on SoundCloud, which shows that people are interested in knowing about our music history. We had not expected this when we started.â€

As for the future, Vikram hopes to expand his initiative and involve researchers and academicians who can study the material collected by him over the years, making it interesting and accessible, especially to young people.

If you wish to contribute to Vikramâ€™s collection or donate, you can write to him at vikram.sampath@gmail.com.

Kudos, indeed! What an insightful undertaking and firm pursuit! Coming generations will be indebted to your input of the effort, time, energy & money!

This is wonderful work Vikram saheb is doing,young people recognizing our heritage and saving it .

Jodi Tor Dak Shune Keu Na Ase Tobe Ekla Cholo Re ("If no one responds to your call, then go your own way alone"), commonly known as Ekla Chalo Re, is a Bengali patriotic song written by Rabindranath Tagore in 1905. Originally titled as "Eka", the song was first published in the September 1905 issue of Bhandar magazine.

GREAT AND GREAT AND SIMPLY GREAT.SALUTE

Great initiative - please continue this magnificent effort. My best wishes are with you.

What an inspiration... We certainly need more people like him today than ever... Many many sincere thanks for the great service you have rendered through your passion.

Thank you Vivram. Such a rare, wonderful gift.

Bravo !! Great service is being done for Indian Music preservance !!