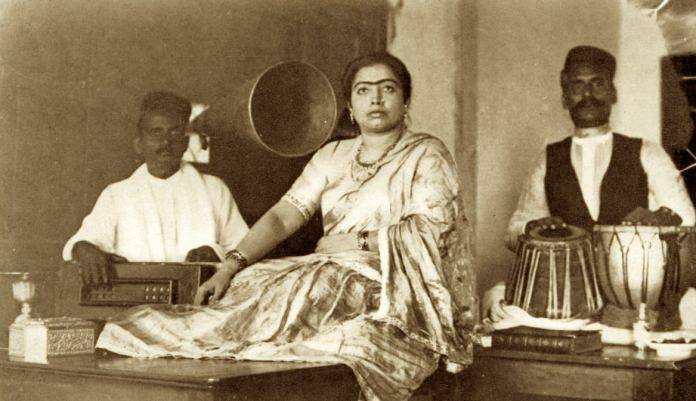 Gramophoneâ€™s search for â€˜nativeâ€™ voices in 1900s brought it to Indiaâ€™s Gauhar Jaan, who would go on to have 600 records to her name.

It was 1902. A rudimentary, makeshift studio had been set up in a hotel in Calcutta. She arrived with her suite of attendants and accompanying musicians on 11 November, dressed in her best finery â€” delicate black gauze draperies embroidered with real gold lace. Frederick William Gaisberg, the first recording expert of The Gramophone and Typewriter Limited (GTL) from London, asked her to climb on the table, crane her head into the recording horn fitted on the wall, and sing as loud as she could. Depending on how loudly she sang, the needle at the other end rotated and cut grooves on the master shellac disc. Three minutes was all she had to convey something as expansive and improvisatory as Indian classical music. At the end of the recording, she shouted out what was to become her characteristic signature â€“ â€œMy name is Gauhar Jaan!â€

Among her early recordings is this thumri in Raga Sohini, composed by one of her gurus Bhaiya Ganapat Rao â€” an announcement that trails away as the recording comes to an end.

These announcements of names were a technical necessity because record masters were sent to Hanover in Germany for pressing. It was an anonymous voice for the technician who would hear these announcements, identify the singer, put the labels, and ship them back to India for sales.

As the first strains of Gauharâ€™s high-pitched, cultured and captivating voice was etched on the grooves of Gaisbergâ€™s shellac, Indian classical music took a giant leap forward. From the confines of the courtesansâ€™ salons and the rich manâ€™s soirees, Indian classical music was catapulted right into the homes of the common people. Gauhar Jaan became the first â€œcommercially recordedâ€ artist of the sub-continent.

Born Eileen Angelina Yeoward in Azamgarh, in then United Provinces, on 26 June 1873, Gauhar had a unique lineage. Her grandmother was Hindu, her grandfather British and father Armenian Christian. Her parentsâ€™ marriage ended in a bitter divorce when she was barely six years old. Her mother Victoria Hemmings then moved to Banaras with her Muslim benefactor Khurshid. This is where Victoria and her six-year-old converted to Islam and took on the names of Badi Malka Jaan and Gauhar Jaan, respectively.

In her illustrious career, Gauhar recorded close to 600 records in over 10 languages. Her repertoire was vast and ranged from the weighty khayal to the supposedly lighter forms of Hindustani music such as thumri, dadra, kajri, hori, chaiti and bhajan.

While a khayal is traditionally expanded into hours, Gauhar devised a wondrous formula to compress this in three minutes or less. The aalap was for a few seconds or just the tonic â€˜Saâ€™, followed by the opening phrase (mukhda) of the first line (sthaayi). This was sung in varied ways for a few times, before moving to the next verse or antara. That too was improvised. With clockwork precision, the composed and improvised versions of the bandish (composition) were presented, with a fleeting glimpse of taans or sargams. Her khayal in Raga Malkauns demonstrates this:

Eager to get the maximum variety from his star singer, Gaisberg once challenged Gauhar Jaan to sing like Suzanne Adams, whose recording of â€˜The Jewel Songâ€™ in Faust (a five-act opera) with its rapid bravura scales had left people astonished. Gauhar Jaan took up the challenge and sang a similar â€˜breathlessâ€™ song in Raga Sur Ki Malhar, symbolising the rain, thunder and lightning.

A talented poet herself, Gauhar Jaan imagines in this recording Prophet Muhammad playing Holi in Madina â€” an act that could make the bigots today react in extreme frenzy and call it blasphemous.

But what set Gauhar Jaan apart was her feisty nature and ostentatious lifestyle. She threw a lavish party costing Rs 20,000 when her cat gave birth to a litter. Flouting British government rules and paying a daily fine of Rs 1,000 she drove around the thoroughfares of Calcutta in her costly phaeton driven by four horses. Her photos appeared on picture post cards and even on matchboxes made in Austria.

Despite all the fame and adulation, Gauhar Jaan pined for true love all her life. She had romantic escapades with aristocrats such as Chaggan Rai of Banaras and Nimai Sen. The true love she found in Bombay with the famous Gujarati theatre actor, Amrit Keshav Nayak, ended abruptly with his sudden death. Her evergreen recording is a dadra composed by Amrit, which they tuned together in Raga Ghara.

Her nemesis came with her muta (contractual) wedding with her secretary Abbas, who was much younger than her. This ended in a bitter legal tangle when she realised he was cheating on her and embezzling her money. She won the case but lost all her money in the process of funding her high-profile lawyers. From her heydays of celebrity status, Gauhar Jaan was reduced to near beggary. That was when Maharaja Nalvadi Krishnaraja Wodeyar of Mysore invited her to his state as a court musician. But by then, Gauhar Jaan had lost the will to fight and on 17 January 1930, she breathed her last in Mysoreâ€™s K.R. Hospital, lonely and forlorn, with none by her bedside to shed tears for her.

She pours the angst of her life in her own composition in the plaintive Raga Bhairavi â€” Ras Ke Bhare Tore Nain â€” which is popular in classical circles and also in the film Monsoon Wedding, knowing little about who its composer was!

Wonderful ! RBSI , you have retained your mojo all these years. Her talent was worthy of Kings' coronations...In fact, she graced the courts of several kings, and performed at King George Vâ€™s coronation, as well as in the durbaars of King Krishna Raja Wadiyar IV in Mysore. Some lesser-known facts about this big personality is that her music was secular and liberal â€“ for example, the devout Muslim spared no efforts in recording music steeped in Krishna bhakti, as well, through her career. And on the stage as well as of it, she was a connoisseur of fashion, jewellery and clothing, and is known for her exquisite gowns and was rarely spotted wearing the same set of jewels.

I end up saving almost all your posts. Stellar research!

Thanks: sharing the information.

If I recall correctly, early last year you and posted a link for free download of Gauhar Jaan's biography on her 145 birth anniversary ( around the time she featured in Google Doodle). If we could have that link again please

I hope someone makes a movie...