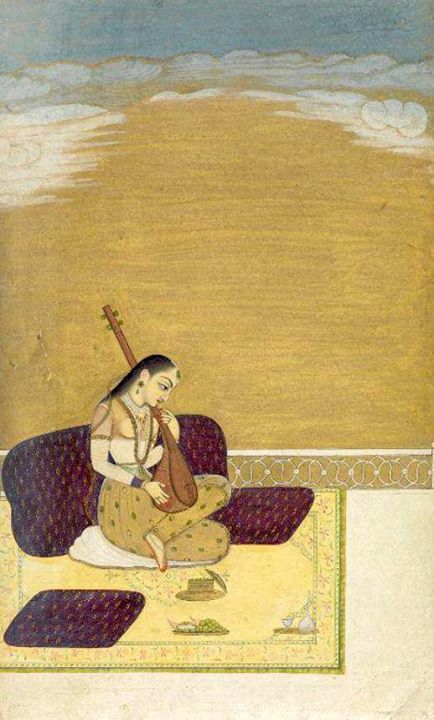 Sarangadeva’s Sangita-ratnakara (first half of 13th century) is of particular importance, because it was written just before influence of the Muslim conquest began to assert itself on Indian culture. The Music discussed in Sangita-ratnakara is free from Persian influence. Sangita-ratnakara therefore marks the stage at which the ‘integrated’ Music of India was before it branched into North-South Music traditions.

It is clear that by the time of Sarangadeva, the Music of India had moved far away from Marga or Gandharva, as also from the system based on Jatis (class of melodies) and two parent scales. By his time, many new conventions had entered into the main stream; and the concept of Ragas that had taken firm roots was wielding considerable authority. Sarangadeva brought together various strands of the past music traditions, defined almost 267 Ragas, established a sound theoretical basis for music and provided a model for the later musicology (Samgita Shastra).

Sarangadeva’s emphasis was on the ever changing nature of music, the expanding role of regional (Desi) influences on it, and the increasing complexity of musical material that needed to be systemised time and again. Yet; Sarangadeva was rooted in the prevalent musical practices of his time. His stress was consistently on the Lakshya the music as practiced than on ancient theories which though he respects them highly.

Thus, Sangita-ratnakara not only provides materials for the study of the ancient music , but it also gives an insight into the then current practices. In his writing, Sarangadeva draws a clear distinction between the well established ancient (purva prasiddha) and the contemporary popular (adhuna prasiddha) Ragas. He also gives descriptions of the structures and temperaments of musical instruments such as Veena and Vamsa (flute ) according to the practices of his times.

Sarangadeva gives some information about himself in the beginning of the work. Sarangadeva introduces himself as belonging to a family which hailed from Kashmir. His grandfather Bhaskara, an Ayurveda physician, moved from Kashmir into the newly found Yadava capital Devagiri (Maharashtra) in the Deccan region at the invitation of King Bhillanna V (1173-1192). After the death of Bhillanna, his son Jaitrapala or Jaitugi ascended the throne and ruled for a short period. He was succeeded in 1200 by Singhana (1200-1247). He was a very powerful king and also a great patron of arts, literature, and science. It is during his reign that Sarangadeva was appointed in his father’s (Sodhala’s) post as the Royal Accountant (Sri-karana-agrani). Along with his work at the King’s offices, Sarangadeva continued to practice the family profession of Ayurveda. He is also said to have written an Vedanta work entitled Adhyatma-viveka. That work is not available now.

During his spare hours Sarangadeva was busy composing his monumental work on Indian music the Sangita Ratnakara, the Ocean of Music. It turned out to be one of the important and comprehensive Sanskrit texts on Music of India.

The Samgita Ratnakara of Sarangadeva is a great compilation, not an original work, that ably brings together various strands of the past music tradition found in earlier works like Nāţyashastra, Dattilam, Bŗhaddēśī, Sarasvatī-hŗdayālańkāra-hāra and one that is greatly influenced by the commentary of Abhinavagupta the Abhinavabharathi . But for Samgita Ratnakara, it may have been more difficult to understand Natyasastra and Brhaddesi and other ancient texts. And, Samgita Ratnakara also established a sound theoretical basis for music related issues and practices. It also provided a model for the subsequent treatises to elaborate on music-theories and practices (Samgita Shastra).

In his work Sangita-ratnakara, Sarangadeva devotes seven chapters for discussing these three components (Anga-s) of Sangita.

The Gitam, the song format, is a fusion of Nada (sounds) and Akshara (composition made of words). Its musical element is named Dhathu; while its composition made of words is called Mathu. Lohana Pandita, in his Raga-tarangini, says: – Dhatu-matu-samayauktam Gitam iti uccyate budhaih; tatra nadatmako dhatur matur akshara sambhavah’.

Gitam, going by its traditional definition, strictly belongs to the Salaga Suda class of Prabandha, which is composed two Angas (elements) – Pada (words) and Taala (time-beats); and, having three components or Dhatus (Tri-dhatuka Prabandha): Udgraha, Dhruva and Abhoga. For more on that, please click here. But, in common practice, anything that is sung goes by the name of Gita (Giyata iti Gitam).

The term Vadyam, covers a wide variety of musical instruments, such as : the varied string instruments; different types of Drums; bell-metal cymbals ; and a host of wind instruments including flutes, pipes , conch, trumpets etc.

The Nrtya covers rhythmic limb movements as also eloquent gestures expressing emotions through Abhinaya. It is a harmonious combination of facial expressions, various glances, poses and meaningful movements of the hands, fingers and feet. Nrtyam, the dance, delightfully brings together and presents in a very highly expressive, attractive visual and auditory form, the import of the lyrics (sahitya), the nuances of its emotional content, to the accompaniment of soulful music and alluring rhythmic patterns (tala-laya).

Thus, the Samgita Shastra as envisaged by Sarangadeva was a composite art consisting Gita (melodic forms), Vadya (instruments) and Nrtta (dance or limb movements). By the time of Samgita-ratnakara, three Angas (limbs) of Samgita were well developed. Of these, the Vocal music was regarded as the essential, fundamental music through which all other forms of music were to be understood and interpreted. Here again, Sarangadeva focuses on Desi Sangita, though he comments on aspects of Marga Sangita. On Dance (Nrttya) he offers clear picture of both Marga and Desi traditions, although in a concise manner.

Sangita Ratnakara is a standard and an authoritative text; and it hugely impacted almost all the writers in the subsequent period. It is also a reliable source book on ancient music traditions and their authors. Sarangadeva, gives an elaborate resume of the general system of Indian music in theory and practice as had been developed in the centuries previous to the thirteenth. He gives detailed exposition of th jatis, and the grama-ragas, accompanied by actual notations.

Rare Book Society of India, hats off to U Sir for this wonderful & informative post _/_

Presently working on him through the prism of Kashmir.Can anyone help in knowing more about how work of Abhinav gupta was dwelled upon by him?

This is a Ragmaala painting? What style?