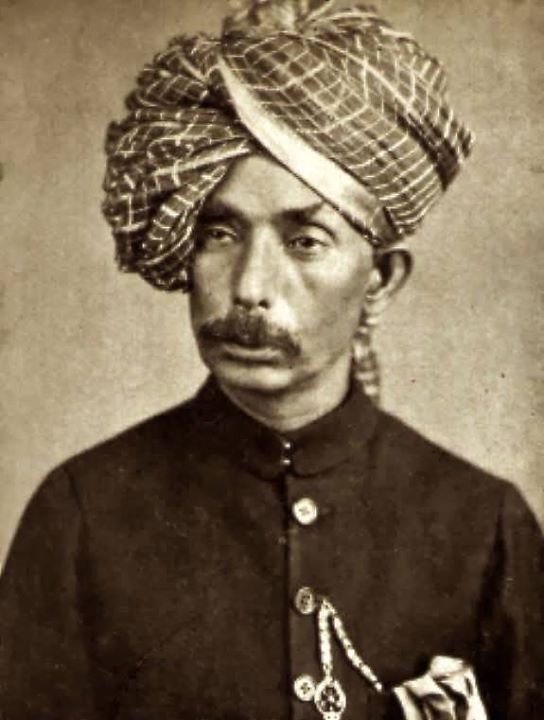 Essay:
Hindustani vocalist Abdul Karim Khanâ€™s music has special relevance in these communal times
By Vikram Sampath
Published in The Print - 19 May, 2019

Listening to Abdul Karim Khan at the age of 11, Bhimsen Joshi is said to have made up his mind that this was how real music ought to be.

An experiment of a different kind was brewing in the royal court of the Maharaja of Mysore â€“ Nalwadi Krishnaraja Wodeyar. The renowned Hindustani vocalist Ustad Abdul Karim Khan was engaged in deep musical discussions with the galaxy of Carnatic musicians of Mysore. Notable among them was the famous composer-musician Mysore Vasudevacharya. The cultural melting pot that the royal court was under the Wodeyars, facilitated such interactions and osmosis.

Born on 11 November 1872 in Saharanpurâ€™s Kairana, in a family steeped in music for several generations, Abdul Karim Khan was quick to grasp several nuances of Carnatic classical music. And to make matters more interesting, he decided to record them for The Gramophone Company, possibly when it came to Mysore towards the end of the first decade of the 20th century. From 1915, Khan was a regular guest in the royal durbar of Mysore and during its annual Dasara celebrations.

Here is a recording of the founder of the famed Kirana gharana of Hindustani music singing one of the most evergreen compositions of saint Thyagaraja in Telugu, set to the Carnatic raga Kharaharapriya â€” Rama Nee Samaanamevaru? â€˜Oh! Lord Rama, who can ever match youâ€™? â€” a poignant melody that is more relevant today when communal conflicts have polarised his hometown Kairana in Uttar Pradesh. Abdul Karim Khan begins the recording with a Carnatic-sounding aalaap, followed by the opening lines of the composition. These are rendered in a unique manner that is tough to categorise as Hindustani or Carnatic.

Notably, being deeply inspired by the Carnatic concept of the volley of improvisatory solfa-syllables or Kalpana Swarams at the end of any composition, Abdul Karim Khan introduced these as sargams into the Kirana gharana. A delighted Maharaja of Mysore awarded him the title of â€œSangeeta Ratnaâ€.

In yet another distinct influence of Mysore Vasudevacharya, Khan sings a Telugu composition of the formerâ€™s guru Patnam Subrahmanya Iyer â€” Enta Nerchina in Raga Saveri. All of oneâ€™s achievements and mastery in literature, arts or the Vedas mean little without the grace of the Lord, rues the composer. Khan sahib brings out this emotion rather powerfully in his rendition, replete with sargams and a Hindustani influence.

Ever the innovator, Abdul Karim Khan also tried his hand at incorporating elements of Carnatic music and the sargams into Marathi natyasangeet as well. In the Marathi geet â€œUgeech Ka Kantaâ€, he presents a beautiful fusion of Hindustani aalaap, Carnatic sargams, all in Marathi lyrics set to the Carnatic raga Ananda Bhairavi. Talk about syncretism! Not only did he experiment, he also dared to record these on gramophone discs.

With a strong training under his father Ustad Kale Khan and uncle Abdullah Khan, Abdul Karim Khanâ€™s music was characterised by the prominence given to emotions and the manner in which the words of the lyrics effortlessly dissolved in the notes. From a sarangi player that he was, Abdul Karim Khan gravitated to vocal music. But he was adept at playing several other instruments such as veena, sitar and table as well.

His stay in the southern province after stints in Baroda and Bombay not only influenced him musically, but also brought into his life an unlikely companion â€” a dog. Even though domesticating a dog was considered un-Islamic, Khan sahib was deeply fond of his pet. He interestingly named the dog Tipu (possibly due to the Mysore influence?). It was also his musical companion and ended up becoming a big draw at the maestroâ€™s concerts. His disciple and biographer Balakrishnabua Kapleshwari mentions that the dog was able to reproduce the musical notes of the ustad and was hence showcased in special shows at Satara, Pune and Bombay.

Every time Abdul Karim Khan visited Mysore, he would halt at Dharwad on his way back to Bombay or Baroda. This influenced the musical atmosphere of the Hubli-Dharwad region, which became so infused with the Hindustani music, particularly the Kirana gharana. The region has produced so many musical gems such as Rambhau Kundgolkar (Sawai Gandharva), Kumar Gandharva, Bhimsen Joshi and Gangubai Hangal who were all influenced by Khan or his disciple-lineage.

Unlike other male ustads who stayed away from recording for long, Khan took to the gramophone by 1905 itself. Among his famous recordings are the thumris Piya bina nahin aavat chain in Raga Jhinjhoti and Jamuna ke teer in Raga Bhairavi. Listening to the former recording at the age of 11, Pandit Bhimsen Joshi is said to have made up his mind that this was how real music ought to be.

His renditions of ragas Gurjari Todi, Lalit, Patdeep and rare ragas like Abhogi, Gauri and Sughrai have been captured on the shellac discs. The following 1906 rendition in Raga Shankara was another signature piece of both the Kirana gharana as well as that of the ustad:

Abdul Karim Khan finally settled down in the town of Miraj in Maharashtra. It is said that during a train journey in 1937 along with his students, he alighted at the Kollam station at 11pm, laid out his carpet to offer his namaz, sang his favourite Raga Darbari, and breathed his last. Music remained his constant companion until the end.

In todayâ€™s world of binaries, maestro Abdul Karim Khanâ€™s life, which went beyond the false boundaries of religion, language, musical styles and their associated puritanism, and focused on a perennial quest for the eternal, perfect note, stands out as a beacon of hope.

Can anyone confirm about one of his daughters called Gul-e-bakawli who grew up to be the famous singer Hirabai Barodekar ?

Communal times.....selective outrage and double standards will be in trend for next five years.

Idiotic intro and conclusion with good content. He failed to mention however, that AKK's children grew up as Hindus and that there was a sharing and mutual respect for rituals of different faiths in the household.

Who said that this was communal times??!! Strange! When Hindus were massacred mercilessly, it was harmony!! When they defend their lives it is communal. Ask what is communal to those few Hindus living in Pakistan!! Don't play too wise!

Aditi Sapre, check this out!

Oh how could they possibly be communal times? A Muslim man has just been beaten to death by a mob. Weâ€™ve had massive communal blowups on and off. And why â€˜usâ€™ and â€˜themâ€™ ? Sounds pretty communal to me. Strange logic I say.