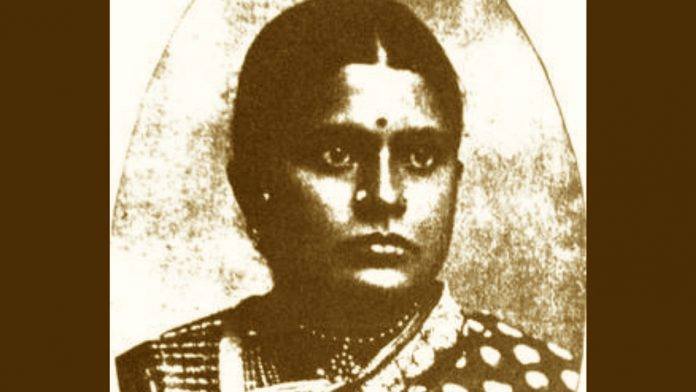 Essay:
Coimbatore Thayi, the Carnatic singer who struck a chord in Paris but is unknown in India
By Vikram Sampath
Published in The Print - 18 June, 2019

Gramophone records were usually colourâ€coded based on the artisteâ€™s popularity. Thayiâ€™s was coded violet, indicating she was among the most popular.

It was in 1911 when Maurice Delage, a pianist and composer in Paris, came across a gramophone record of an artist from India. Delage was the heir of a shoe-polish manufacturing company in France. Born with severe vision impairment, Delage studied music for 10 years under renowned French composer Joseph Maurice Ravel. Delage wrote to Ravel about the Indian musicianâ€™s recording, saying they â€œsent chills up and down my spine.â€ His keen ear detected â€œthe microtonal effects she produced while singing.â€ He described the artist as a â€œmaster of open and closed mouth singing.â€

The music that fascinated Delage was that of a devadasi in distant Madrasâ€“ Coimbatore Thayi. Delage visited India thereafter and decided to meet the woman whose music had blown him away. He met her during one of her performances at a temple in Mahabalipuram. The two supposedly interacted, and Delage was said to have been left deeply inspired by Thayiâ€™s music, and dedicated a Western composition, â€˜Ragamalikaâ€™ â€“ a garland of ragas â€“ to her. Music publisher Durand was so enchanted by this composition that on 20 June 1914, he paid Delage 500 francs to orchestrate it.

A modern-day rendition of Delageâ€™s â€˜Ragamalikaâ€™ has such swift glides in its notes, or bhrigas, that it lends quite a touch of Carnatic music to the entire composition.

This wondrous episode where Delage composed a song after being inspired by Thayi underscores the unintended osmosis of Western and Eastern cultures that recording technology facilitated in its wake. The records had truly brought Indian music from its local confines to not only a wider Indian audience and global mass media, but also to Western musicians and audience.

Born in 1872 in a family of traditional devadasis of Coimbatore, Thayi was named Pazhanikunjaram. Her mother Vengammal and grandmother Visalakshi were famed courtesans of their times. Spotting musical and dance talents in her, Vengammal put Thayi through rigorous training at an early age. Thayi gave her maiden dance performance or arangettram at the age of 11. She learnt music under the tutelage of several teachers, and Kannada songs from singer Mysore Kempe Gowda. With time, given the social stigma that came to be attached with the sadir (the precursor to Bharatanatyam) dance of the devadasis, Thayi gave up dancing completely and shifted her focus to music.

With the gradual loss of power of royalty in parts of Tamil Nadu, the matriarchs of her family migrated to Madras in the 1890s for better opportunities. They settled in the cityâ€™s devadasi bastion of George Town, sharing the neighbourhood with eminent artists such as Veena Dhanammal and Salem Godavari. The developing urban cities of Madras, Calcutta, and Bombay not only provided the courtesans new patrons â€“ the nouveau rich, neoâ€literate gentry â€“ but also gave them wider exposure to train and perform.

It was in Madras in 1910 that Thayi was solicited by The Gramophone Company to record songs. From 29 August 1910 to 2 September 1910, The Gramophone Company held special â€˜Coimbatore Thayi Recording Sessionsâ€™. Records were usually colourâ€coded based on the artisteâ€™s popularity. Thayiâ€™s, like Janki Bai, her counterpart in Hindustani music, was coded violet, which indicated she was among the most popular and celebrated artistes of her times. The Gramophone Company made nearly 60 recordings during this single session.

Here is an early recording of hers of the famous varnam in raga Bhairavi â€“ â€˜Viriboniâ€™ composed by Pacchimiriam Adiyappa, a court musician in the Maratha kingdom of Thanjavur in the 18th century.

The records made Coimbatore Thayi popular, and awards and invitations for performances started coming in from the royal courts of southern India such as Mysore and Travancore, and rich zamindars or aristocracies.

In a public gathering in 1914, Thayi was felicitated for her musical talents and the stupendous success of her records by the people of her hometown Coimbatore. Prominent citizens of the city presented her a thick golden bracelet embedded with diamonds and emeralds.

Thayi was a prolific recording artist and produced nearly 300 records in her lifetime. Her recorded repertoire is vast and has the compositions of the Trinity of Carnatic music â€“ Thyagaraja, Muthuswami Dikshitar and Shyama Shastri.
Here is Thayiâ€™s recording of Thyagarajaâ€™s composition â€˜Maa Janakiâ€™ in Raga Kambodhi. Thyagaraja heaps encomiums on Sita and mentions that Rama attained his greatness only because of Sitaâ€™s presence in his life.

Thayi also recorded the sensuous padams and javalis, along with Tamil devotionals like the Tiruppugazh and Arutpas. Though her soft and supple voice, unlike the loud voice of her contemporaries, seemed inadequate for the early acoustic recording technology, the success of the sales showed that she had a vast fan base.

The following is a recording of a Telugu javali, â€˜Mariyada Teliyakaneâ€™, in Raga Surati composed by Patnam Subramanya Iyer. It is addressed to a woman who is asked by the hero, if it is appropriate to talk without showing him any modicum of respect or politeness, without knowing who he is, though their amorous relationship allows room for being flippant with each other.

Through her records, Thayi popularised the Tamil devotional compositions of the 19th century mystic siddha poet and saint, Ramalinga Swamigal, known as Arutpas. One such recording of an Arutpa in Raga Saveri:

Thayi died early when she was barely in her 40s in 1917. But by then, she had created a rich and vast corpus of her songs on gramophone discs. They continued to make brisk sales for several decades after her demise.

Unfortunately, the voice of this Indian artist, which touched a chord in distant Paris, is anonymous in India today. Coimbatore Thayi, or the story of her life and music, walk the annals of Carnatic musicâ€™s history as a barely discernible ghost, with no recall among musicians or aficionados. The extant records, most of which are found in a terrible condition in shanties and flea markets and full of scratches on them, struggle to convey to us a fleeting glimpse of the glory of the musician who recorded on them.

Brilliant stuff, absolutely !!! What a scoop this is ! Wish the recordings had some more clarity.

A treat for anyone who loves Carnatic music!

Fascinating,listening to her singing takes you on a long journey beyond

Precious..., Chandramouli Mahadevan Thank you for the tag