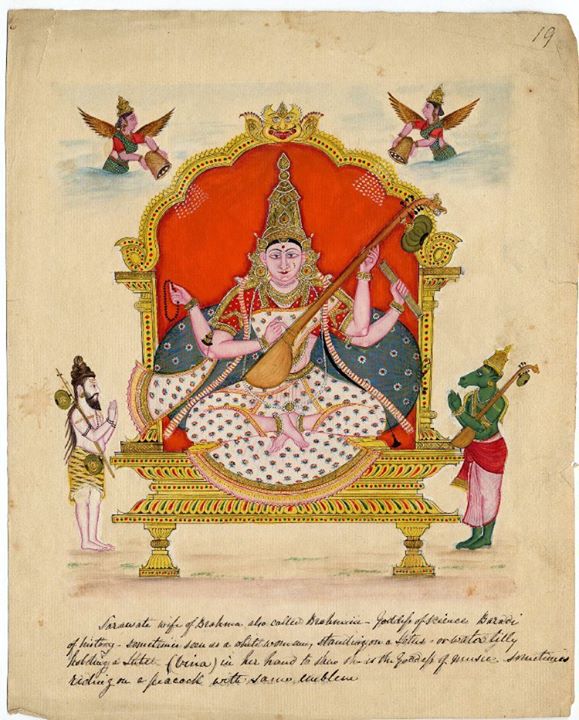 Digital Rare Book:
SANGITARATNAKARA (Ocean of Music)
By SARNGADEVA
With Kalanidhi of Kallinatha and Sudhakara of Simhabhupala
Edited By Pandit S. Subrahmanya Sastri
Published by The Adyar Library, Madras -1943
Vol. I - Adhyaya I

The Sangita-Ratnakara of Sharngadeva (the 13th century) is one of the most important musicological texts from India, which both Hindustani music and Carnatic music regard as a definitive text.

The text is also known as Saptadhyayi as it is divided into seven chapters. The first six chapters, Svaragatadhyaya, Ragavivekadhyaya, Prakirnakadhyaya, Prabandhadhyaya, Taladhyaya and Vadyadhyaya deal with the various aspects of music and musical instruments while the last chapter Nartanadhyaya deals with dance.

The significant commentaries on the text include the Sangitasudhakara of Simhabhupala (c.1330) and the Kalanidhi of Kallinatha (c.1430).

This work was written by ÅšÄrÅ„gadÄ“va in the end of thirteenth century. The author was attached to the court of YÄdava King SinghaÅ†a, whose capital was Devagiri ( the present Daulatabad, in the South Maharashtra).

SaÅ„gÄ«taratnÄkara is a very important text and this is evident from the fact that many commentaries were written on it. The famous ones are SaÅ„gÄ«tasudhÄkara of SimbabhÅ«pÄla and KalÄnidhi of KallinÄtha. SaÅ„gÄ«taratnÄkara is to a great extent a compilation of the information found in earlier works like NÄÅ£yaÅ›Ästra, Dattilam, BÅ—haddÄ“Å›Ä«, SarasvatÄ«-hÅ—dayÄlaÅ„kÄra-hÄra and is greatly influenced by the commentary of Abhinavagupta on NÄÅ£yaÅ›Ästra. On the other hand the work made a great impact on almost all the writers in the subsequent period. Thus it forms a useful bridge between the ancient and the medieval periods. ÅšÄrÅ„gadÄ“va called himself Nih,Å›aÅ„ka i.e., `doubtless'. He also names a stringed instrument as Nih,Å›aÅ„ka-VÄ«Å†Ä and DÄ“Å›Ä«-tala as Nih,Å›aÅ„ka-tÄla. This book is a great landmark in the history of Indian Music.

Gouache painting on paper from a portfolio of sixty-three paintings of deities and daily life. The goddess SarasvatÄ« on a throne. In her upper right hand she carries a mala (prayer beads), with her upper left and lower right hand she holds the vina, and in her lower left hand is a book. To her right, resting the vina on his shoulder, is the divine musician Narada, clad in a tiger skin. Opposite Narada, to the left of SarasvatÄ«, is the other divine musician, the horse-headed Tumburu who rests the tambura on his shoulder.

Image and text credit:
Â© Trustees of the British Museum

Thanks for sharing such invaluable works RBSI