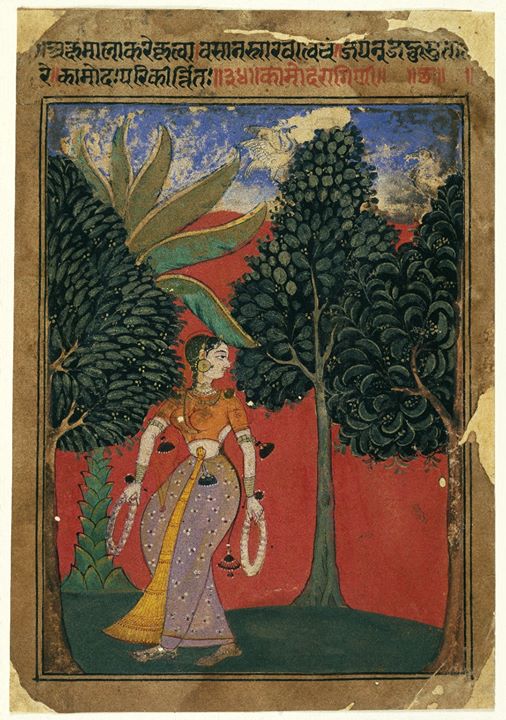 The most prevalent form of classical music in northern India is the raga. A raga is not a composed piece of music but an established set of tonal, rhythmic, and expressive guidelines from which a musician creates an improvised performance. The guidelines are specific enough that a seasoned listener can recognize any particular raga if it is performed properly. There are many different ragas, and over the centuries they have been organized into categories, described as families, in which related musical themesâ€”called raginisâ€”are considered the wives of a raga, and still othersâ€”called raga-putrasâ€”are considered the ragaâ€™s sons and daughters.

Each raga is associated with an emotional state and a time of the day and year. Poets imagined brief narratives to capture the feelings inspired by specific ragasâ€”mostly involving the various stages of a romantic relationshipâ€”and connoisseurs later commissioned artists to illustrate the poems. These envisioned musical themes, gathered into manuscripts called Ragamalas (â€œGarlands of Ragasâ€), became some of the most popular subjects for miniature painting among the ruling elite of northern India in the seventeenth and eighteenth centuries.

This is a very early example of a Ragamala painting, probably made for a nonimperial patron at a time when most of the artists in northern India were employed by the imperial Mughal court. In contrast to the highly refined, cosmopolitan images made for the emperors of the time, this paintingâ€™s style reflects the indigenous Indian aesthetic of bright, flat colors, decorative patterning (seen in the leaves of the trees), and stylized forms. This style would become increasingly popular with maharajas, or Hindu rulers, of kingdoms in northern India and with other patrons who wished to create more traditional-looking paintings. Like many raginis, this one is represented by a solitary woman; she holds two garlands of flowers, presumably intended for her lover, whom she hopes to meet in the woods.

Composition of twelve verses,of raagmala appended to Sri Guru Granth Sahib Ji is not much different from the others, and, by itself, does not set up a new system.