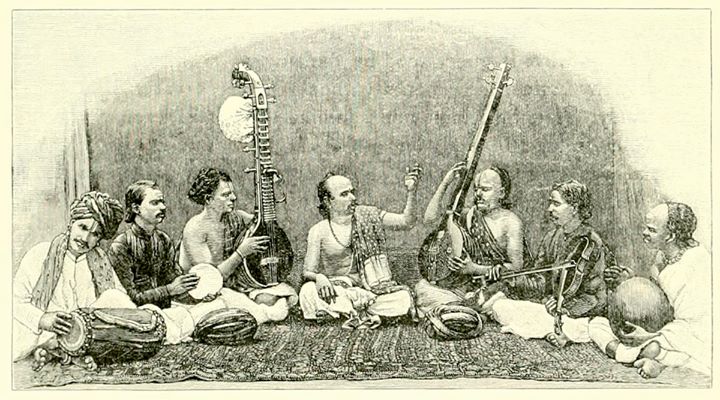 Tracing the origin of music is not an easy task. Great minds have delved deep into the past to take a glimpse of the primitive music, but failed to obtain any authentic facts. Indian music however traces its origin to 'Samaveda'. Geniuses have constantly worked on this field of knowledge trying to synthesize philosophy, psychology and aesthetics and blend it with music. The oral tradition had its drawback in the transmission of knowledge and caused confusion. Hence there was an urgent need for the script. Celebrated writers like Narada, Panini and Yagnyavalkya have developed music as an art through their writings. Even though part of the history of ancient music is legend, our scholars with their knowledge- hungry-souls have worked hard enough to come with major developments in the field. Naradiya Siksha, Paniniya Siksha and Yagnyavalkya Samhita were the only authentic source material for ancient music. While the 1st was lost and only references could be found in the later classics on music, the other two were not treatises on music but, yet landmarks in the evolution of music during past centuries could be spotted in these books.


1. The Natyasastra of Bharata: It is the earliest literature on music. It is considered to have been written around 2nd century B.C. Written in Sanskrit, the book runs into 6000 couplets spread over 36 chapters, covering a wide range of topics about music. It is a document of supreme educative value. Chapters 28- 34 deal with aspects of music like, Shruti, Swara, Grama, Murchana, Jati, various types of instruments and how and when to play them, their construction and so on. All later works and their findings have their roots in this book.


2. Silappadikaram by Illango: This was a poem in Tamil written in the 2nd centuryA.D. The author was a gifted scion of the Cheran Royalty. The work had 3 cantos divided into 30 chapters with more than 5200 lines. It was a master piece, a literary classic, depicting in sublime verses the religious, social, political, cultural and economic set up of the three southern kingdoms - Chera, Chozha and Pandya. It was poetry, lyric and drama woven together. Music was treated in the most exhaustive manner. It dealt with various musical instruments and directions for tuning and using them, different aspects of rhythm, different 'Panns'(ragas)and their evolution, the seven notes in Tamil, the treatment of ragas and their classification, 72 melakarta plan, derivation of 'Palais' through modal shift and so on .We find an endless stream of informative musical material here.

3. Sangam Literature: Silappadikaram promoted vigorous creative activity in music. During the Sangam Age of Tamil literature which ended by 5th century, most of the great classics had music as their favourite theme. Tolkappiam, the oldest Tamil classic was a primary treatise on grammar. It surveyed the entire field of culture and laid down rules and directions for all kinds of literary compositions.

4. Tamil Hymns of Tevaram: Even though the Sangam literature centered on music and dance not much was said about the music theory or musical instruments. Practical side of music was not touched upon eloquently. With the dawn of the 7th century, philosophers and religious leaders identified the enthusiasm of people for music and they used this opportunity to propound their doctrines in simple songs in the language of the masses. The 'Tevaram' and 'Divyaprabhandam' of Saiva and Vaishnava saints in popular 'panns' (ragas), set to easy talas were the earliest patterns of practical music on record. The four important figures in the Tevaram hierarchy were Manicka Vachakar, Tirugnana Sambandar, Tirunavukkarasar and Sundaramurti. 'Jeevakachintamani', a poem running into more than 12,500 lines written by a Jain monk â€“ Tiruttakkathevar, also stressed on the importance of music for the culture and stability of the community.

5.Brihaddesi of Matanga: After Natyasastra and Tamil classics, Brihaddesi is a work in Sanskrit best known during that period. The work stands incomplete. Only about 500 verses are available, along with a number of commentaries. Of the available chapters, the first three explain aspects like, Nada, Shruti, Swara, Murchana, Desi,Tana, Varna, Alankara, Jati, Geeta and Raga. Various other aspects including the popular melodies of his time are given in the other chapters. As the name suggests, it is a huge work and highly informative, like an encyclopedia.

6. Abhjilashitarta Chintamani (Manasollasa) by Someshwara: He was a king who ruled over Chalukya dynasty in the 12th century. His contribution to music is great. He hailed the music of South India as 'Karnataka Sangeetha". He has covered in his book, countless topics about music like, the qualities of a singer, composer, the auditorium, the voice, Alapana, Gamaka and so on in great detail.

7. Sangita Samayasara of Parshwadeva: The book must have been written in 13th century. The book is divided into 10 Adhikaranas, where he has dealt with Shruti, Swara, Grama, Ragas, Desi-Gita, Alankaras, Gamaka, Vadya, Nritya, Talas and so on. He has classified Ragas as Raganga, Bhashanga, Upanga and Kriyanga and has mentioned details of 43 ragas that were popular during his time. It is an authoritative book.

8. Sangita Ratnakara of Sarngadeva: The author was adept both in music and Sanskrit and had studied all the 'Sastra Granthas' that were available in his time, in minute detail. His is a voluminous treatise running to about 5000 verses divided into 7 chapters written in Sanskrit, with every detail pertaining to musicology. It is a perfect work done meticulously and methodically. It is an encyclopedic work.

9. Sangitasara of Vidyaranya: It was written in 14th century. The book is not available now. But before it was lost the other musicologists who chanced to study it have given information in their books about this book. Particularly Govinda Dikshita mentions about 9 chapters from Sangitasara and taken a lot of ideas from this book.

10. Swaramelakalanidhi of Ramamatya: He was a noted scholar and musician, received a royal commission to write a book on music to reconcile tradition and current practice. It was published on 21st August 1550. It had 4 chapters - Swaraprakarana, Veenaprakarana, Melaprakarana and Ragaprakarana, with a total of 328 couplets in Sanskrit. It is a fitting introduction to the modern period in the history of South Indian Music. After this work, numerous other publications on music were made. Haripaladeve wrote a 100 books. Many other books on Raga, Mela, Janya, etc were published. But Ramamtya's exposition of Mela and Raga and his technic of 'Madya Mela Veena' was a pioneering work in the scientific and systematic classification of Ragas.

11.Ragavibhodha of Somanatha Kavi: This was another important sanskrit classic on Carnatic Music, published on 18th September 1609, having 463 verses. This book was an advancement over all previous records treating Swaras and Shrutis, Mela and Raga.In many places it looks like he has drawn upon contributions of Purandaradasa.

12 .Sangitasudha by Govinda Dikshitar: He was well versed in traditional lore particularly those relating to music. Only part of his book is available. The last 3 chapters are lost. He has followed the model of Sangita Ratnakara in his book.

Ramamatya, Somanatha and GovindaDikshitar may be regarded as the trinity of theoreticians, while Annamacharya, Purandaradasa and Kshetragnya laid the foundation for practical music on which stands the glorious super structure of Carnatic Music built by the famous trinity of the Golden Era - Thyagaraja, Muthuswamy Dikshitar and Shamasastry.

12. Chaturdandi Prakashika of Venkatamakhin: The Mela concept which went through lot of process by earlier musicologists, saw its completion in Venkatamakhin's period. He was well versed in music, Sanskrit, Vedas, Puranas, Sastras, etc. He was a great composer, Vocalist and a Vainika. His treatise on music stood as an authority and was accepted by all scholars of his generaion and the future generations.

His book has 10 chapters dealing with Veena, Shruti, Swara, Mela, Raga, Tala and so on. The 72 Mela scheme expounded by him revolutionized the Carnatic Music system. Even though he tabulated the 72 melas, he did not name them, it was done by his successors and perfected by Govinda Dikshita who made it into a 'Sampurna Mela Scheme 'and introduced the famous 'KaTaPaYaadi' rule. The book is informative, useful and has valuable information and hence occupies a special status in the world of Carnatic Music.

13. Sangraha Choodamani of Govindacharya: This book was written in Sanskrit, by the end of 18th century. It is fully in accordance with the current system of carnatic music. Swaras, Shruti, Melas, Janyas, Ragalakshanas, Geetas are dealt with in detail. This book gives all relevant information about the theory of Carnatic Music and hence also called by another name - "Sangitasastra Sankshepa'.

14 .Sangita Sarvatha Sara Sangrahamu by Ramanujaiah : It is in Telugu and Sanskrit, having 48 Gitas. It is a very handy book for learners for, it has lot of details about Raga, Swara, their origin, Chandas, Rasas, Moods, etc. The lyrics are based on Puranas and Epic stories.

15. Sangita Sampradaya Pradarshini of Subbarama Dikshitar: He was a scholarly musician. In his book, Subbarama Dikshitar has collected a number of compositions. We find Lakshyagitas, Lakshanagitas, Sancharigitas, Swarajathis, Jathiswaras, Tana varnas, Pada varnas, Kritis, etc. and life sketches of 75 composers and Ragalakshana slokas. This book alone gives the idea of many ragas which have under gone major changes. It is a unique book, useful as a guide and source material for research. It was written in Telugu, now translation in Tamil, Kannada and

VasanthÄ is a raga in Carnatic Music.