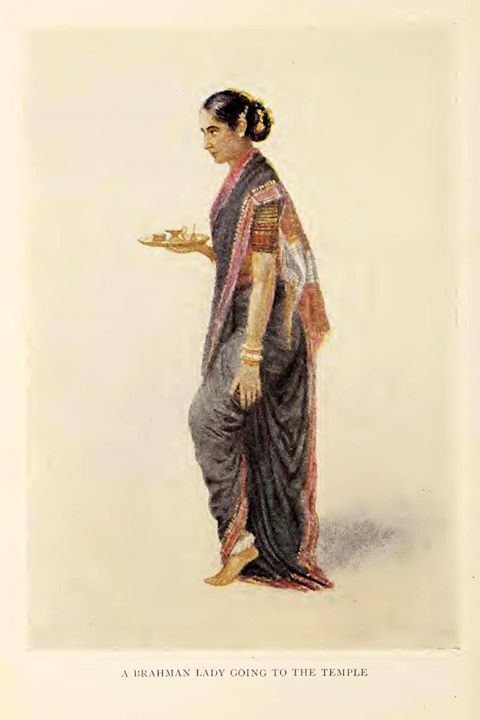 Many generations have passed and other races â€” Hunas and Gujjars and Mongols â€” have invaded India. And asceticism has squeezed the people in its dry hand, and there has been war and bigotry and pestilence. Yet even now the teachings are not quite forgotten. Many a one there still is among the women of India, of whom it can with truth be said : â€œ She is even as a golden lotus.â€

Now, again, the sovereigns of India rule over many regions and send their royal messages to the utter-most ends of the earth. Again the great trade-routes pass through India and the merchandise of East and of West meet in the harbours of Bombay and Calcutta. Castes and peoples feel their way to a common nationality and a fresher spirit, and before their eyes breaks the morning light of a new Renaissance. And in the women of new India the old texts revive to a more vigorous flesh and spirit.

Stand of an evening on the Queenâ€™s Road in Bombay, looking over the wide curve of Back Bay, where the lights of the city fade away into the distances of the sea and on the right the hill throws its contour against the darkening sky. They pass here, brightly-clad, quietly smiling, modestly distant, the women of India at their newest and most modern, yet in essentials formed by the ancient rule. They are discarding perhaps the habits of dark ages of misrule and superstition, but they cling none the less to the spirit of old India â€” to those principles hallowed at its best and freshest age. In their cars the wives and children of rich merchants glide through the crowd. On the back seat, in the shadow of the cabriolet top, a glimpse of gold-brocade can be caught or the tone of a fair brown skin. Here a Bhatia lady passes, come originally from the hot plains of the Cutch Peninsula, the wife of a millionaire cotton-spinner or a financial agent. Or there, in gracefully- draped mantle (sari) and Paris-made shoes and stockings, a Saraswat Brahman lady or a Pathare Prabhu, with that lustrous pallor that is brought by the warm breezes from the sea, goes on her way to her club to play tennis or drink afternoon tea. Seated in open carriages or strolling along the pavement to taste the freshness of the sea-breeze, are hundreds of Parsi girls, in dresses of every hue, with the heavy velvet borders that they a tied, gossiping, nodding to their friends, laughing and chattering. Poorer women dart across the street, pulling children after them through the busy traffic, and earning their youngest on their hip astride. A sweeper woman brushes fallen leaves into the gutter. Through all ihe noise of motors and of the trains that dash along the disfiguring railway, the sound of a bell clanged at the temple door by a worshipper may be heard and, at sunset, the call to prayer from the minaret of a mosque. Behind a high wall, half-way down the fashionable drive, a red light rises against the darkness from the flames which consume the cityâ€™s dead.