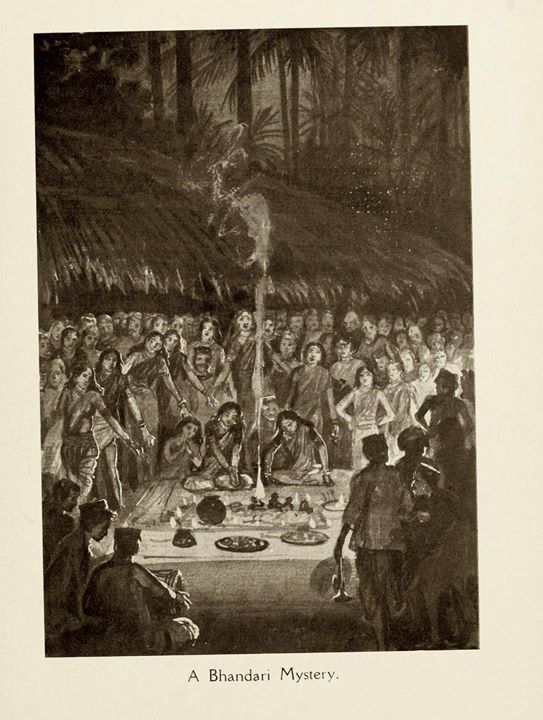 IN the heart of the great palm-groves to the north west of Dadar lies an "oart" known as Borkar's Wadi. shaded by tall well tended trees whose densely foliaged summits ward off the noon-day sun and form a glistening screen at nights, what time the moon rises full-faced above the eastern hills. Not very long ago, at a time when cholera had appeared in the city and was taking a daily toll of life, this oart was the scene of a bi-weekly ceremony organized by the Bhandaris of Dadar and Mahim and designed to propitiate the wrath of the cholera-goddess, who had slain several members of that ancient and worthy community. For the Bhandaris, be it noted, know little of western theories of disease and sanitation ; and such precautions as the boiling of water, even were there time to boil it, and abstention from fruit seem to them utterly beside the mark and valueless, so long as the goddess of cholera, Jarimari, and the thirty-eight Cholera Mothers are wroth with them, Thus at the time we speak of, when many deaths among their kith and kin had afforded full proof that the goddess was enraged, they met in solemn conclave and decided to perform every Sunday and Tuesday night for a month such a ceremony as would delight the heart of that powerful deity and stave off further mortality. The limitation of the period of propitiation to one month was based not so much upon religious grounds as upon the fact that a Municipality, with purely Western ideas of sanitation and of combating epidemics, refused to allow the maintenance of the shed, which was to be the temporary home of Jarimari, for more than thirty days. Yet it matters but little, this time-limit : for a month is quite long enough for the complete assuagement of the anger of one who, though proverbially capricious, is by no means unkindly.

Let us glance at the ceremony as performed on a Tuesday night towards the middle of the month of propitiation, in the darkest portion of the wacti stands a rude hut, containing the emblems of the Mother, occupied for the time being by Rama Bhandari. who acts as a species of medium between the goddess and his kinsmen. In front of the hut a space has been cleared and levelled, flanked on one side by mats for the Bhandari musicians, singers, drummers and cymbal-players, and on the other by four or five chairs and a few wooden benches for the initiates in the mysteries ; and to the stems of several neighbouring trees lamps have been affixed about five feet from the ground, which cast weird shadows across the threshold of the goddess's home. Rama, the high-priest of this wood-land rite a dark, thin man with a look of anxiety upon his face enters the hut with his assistant, Govind, while several fresh looking Bhandari boys take up their position near the gong, cymbals, and drum, prepared when the hour comes to hammer them with might and main. A pause -and Rama returns bearing the symbol or idol of the Mother, followed by Govind carrying a lighted saucer-lamp. The idol, for such we must perforce style it, is nothing more nor less than a bright brass pot, full of water, set on a wooden stool which is thickly covered with flowers. In the mouth of the water pot rests a husked cocoanut, vA^ith a hole in the upper end into which are thrust the stems of a bouquet of jasmine, with long arms of jasmine hanging down on either side. Now the water-pot is the shrine, the very home of Jarimari and the thirty-eight cholera mothers. Behind the jasmine-wreathed stool Govind places another stool bearing a tin tray full of uncooked rice, camphor, and black and red scented powder ; and close to it he piles the cocoanuts. sugar, camphor, cakes, betel-nuts, and marigolds which the Bhandari initiates have sent as an offering to Rama. He next produces a pile of incense-sprinkled cinders, which he places in front of the goddess, and several incense-cones which he lights, while Rama lays down a handful of light canes for use at the forthcoming ceremony. And while the rich scented smoke rises in clouds into the still night-air, shrouding the goddess's face, Govind takes a little rice from the tray and a few flowers, and places them on a Tulsi or sweet basil shrine which stands a little northward of the hut.

The narration is almost resembling the Bonalu a month longfestival in Telangana State.... intending all the goddesses of life threatning diseases .... particularly on Thursdays and Sundays of that month.