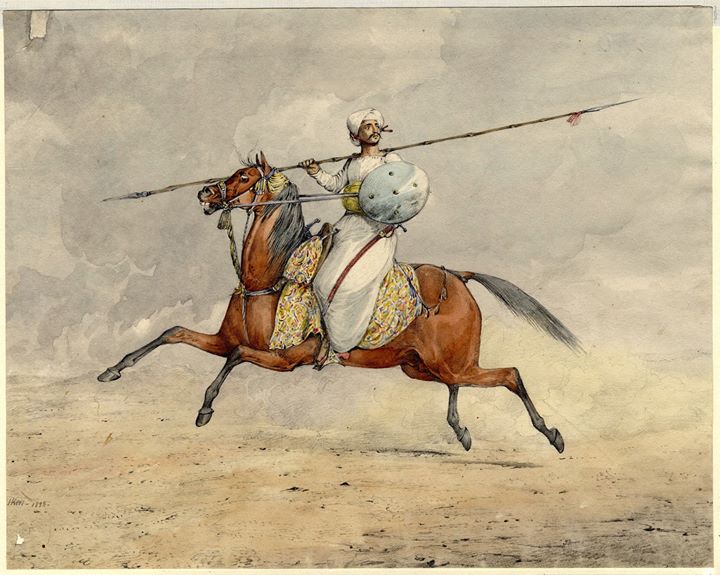 The Marathas were the last indigenous empire builders of India. They leapt into prominence suddenly and swiftly; in the third decade of the seventeenth century the Maratha name was unknown to the world outside; three decades later it had become a terror to the rulers of the land! In the second decade of the next century the Emperor of Delhi had to recognise their defacto supremacy in the Deccan by granting them chauth and sardeshmukhi of six provinces of the South. But their activities were not long confined to the immediate neighbourhood of their home. Balaji Vishwanath entered Delhi in the train of Syed Husain Ali, his son appeared in its environs at the head of his victorious army, his grandsons became arbiters of the fate of the Mughal empire and carried the Maratha banner to the banks of the Indus, while their cavalry scoured the country from Lahore to Murshidabad, from Delhi to Seringapatam. The rapid expansion of their empire was once arrested by the defeat of Panipat, but the Marathas quickly recovered from the shock, and Mahadaji Sindhia founded a new empire in Hindustan. In 1794 they itiflicted a crushing defeat on the Nizam at Kharda and compelled him to cede half his territories. Hardly eight years elapsed before the Peshwa became a feudatory of the British Government in India, the grand armies of Daulat Rao Sindhia and Raghuji Bhonsla were defeated and destroyed by Lake and Wellesley, and the Maratha empire collapsed like a house of cards. If their rise was sudden and swift, the fall of the Maraihas was no less sudden and spectacular. The Empire was apparently at the zenith of its power, it had reached its greatest extent, its man-power was almost unlimited, yet it was destroyed by a foreign power with a small army after a brief campaign of fifteen weeks.

What led to this quick and complete collapse? The plea of accidents cannot be seriously considered. In History accident plays no prominent part, and seldom turns the tide of national fortunes. It is true that Mahadaji Sindhia died while still in the prime of life, and about the same date died a lesser person, Hari Pant Phadke. It is true that the early death of the first Madhav Rao, the murder of Narayan Rao, the unfortunate suicide of the second Madhav Rao were national calamities of no mean order and certainly accelerated the pace of the Maratha fall. It is also true that after Nana Fadnavis there was no one competent to unite the divergent forces that constituted the complex organisation called the Maratha empire. But why did the Maratha race suddenly grow barren of great men? If the Marathas could survive Shivajiâ€™s death, why could they not survive Nana Fadnavis? If able leaders came forth to save the nation in 1690, why were they lacking in 1802? The death of Cavour did not arrest the progress of Italian unity; why should the death of Nana Fadnavis or Mahadaji Sindhia cause the downfall of the Maratha empire Accidents offer no satisfactory explanation.

Social reformers have attributed the misfortunes of the Marathas to their caste dissensions. Yet the Maratha empire came into being under the shadow of the caste system, it expanded and flourished while that system was in full operation, Shivaji, a Maratha, recruited his highest officers from the Brahman caste the two greatest generals employed by the Brahman Peshwa in Northern India were both Marathas; Yamaji Shivdev, a Brahman, once intrigued against the Brahman Peshwa; the pretender Sadoba found an ardent supporter in the Chitpavan governor of Ratnagiri, while Jaswant Rao Holkar, a Maratha (more accurately a Dhangar), fought against Daulat Rao Sindhia, another Maratha. Govind Pant Bundele, a Karhada Brahman, complained that there was none in the Brahman Peshwaâ€™s court to recommend his devoted services as he was only a Brahmin servant of His Highness. The caste system has been responsible for many evils in India but for the real cause of the downfall of the Marathas we must look elsewhere.

It has been suggested that the Marathas fell because they neglected their civil government; and they lived on plunder and did not encourage trade and industry, agriculture and commerce. Defective as their civil institutions were they were no worse than similar institutions in contemporary Europe. Their government certainly degenerated in the closing years of the eighteenth century, but that was a result rather than the cause of the decline and fall that had already commenced.

Nor was their fall due to their policy of aggression. An imperial power in a country like India must be aggressive, until its supremacy is fairly established over the whole country. In pursuance of such a policy they had often recourse to diplomacy of a kind condemned by their critics. Whatever may happen in future, in the past abstract principles of morality played little or no part in diplomacy oriental or occidental. Neither Clive nor Cavour, nor Bismarck, nor Napoleon III would hesitate to hoodwink a rival or dupe an enemy. In the eighteenth century the standard of diplomatic morality in Europe was certainly not very high, as Albert Sorrel tells us. In India things were no better and no worse. If the Marathas coveted the lands of their neighbours, their neighbours on their part were not free from land hunger. Every envoy that the Bombay Government sent to Poona was instructed to take advantage of the disunion and dissension that existed among the Marathas. Vansitart seriously contemplated a general invasion of the Maratha empire from all sides when he learnt of the disaster of Panipat, although there was peace between the two powers at the time. It is true that had the issue of that battle been different, Vansitartâ€™s protege at Murshidabad would almost immediately have felt the weight of the Maratha military power.