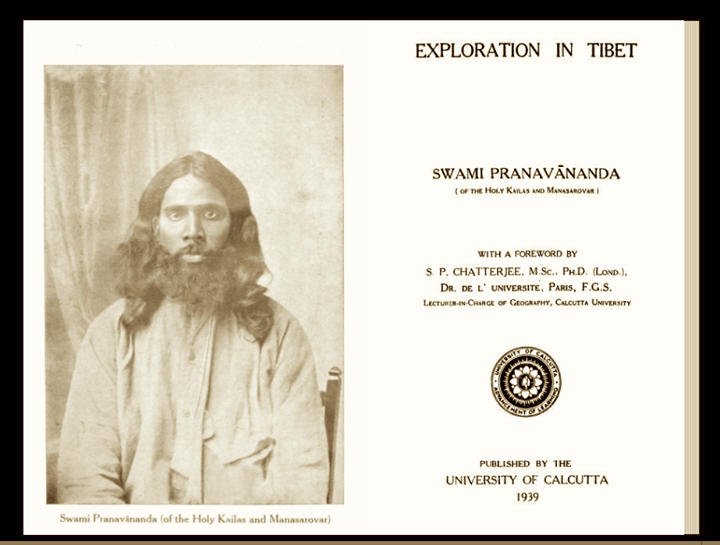 An important record by the first Indian explorer of Tibet in the early 20th century.

The book consists of two parts. In the first part, the author after giving a general description of the area deals with the various phenomena that he observed during the freezing and the melting of the lakes â€” Manasarovar and Rakshas Tal. The crevasse, locally known as mayur, along the edge of
which blocks of ice are piled up, is a peculiar surface feature of Manasarovar when it freezes. The Swami is the first explorer who studied the lakes continuously during the whole of the winter and the early spring, and has given us a vivid and picturesque description of the changing surface features of the lakes during this period. His descriptions of the people and their mode of living, though brief, are no less interesting.

In the second part of the book, the author takes up the question of the sources of the four great rivers and attempts to tackle it thoroughly in an exhaustive manner. The problem of fixing the sources of rivers is a difficult one, especially in a region like Tibet, where rivers are continuously cutting back by headwater erosion. It requires a detailed and careful study before anything like a â€œ last word can be said on this point. I am glad to find that the Swami is not dogmatic in his assertions, far less egoistic. He examines systematically the different criteria which professional geographers usually apply in the case of the four great rivers, and arrives at the conclusion that it would be most reasonable and nearer the truth to accept the traditional sources. He draws the attention of the reader to certain inconsistencies in Dr. Sven Hedinâ€™s treatment of the subject, though I am sure, that the Swamiâ€™s admiration and regard for Dr. Sven Hedin as an explorer and one of the greatest geographers, are in no way less than anybody elseâ€™s.

I am confident that this book will be widely appreciated both in India and abroad, and I hope that it will do much to start lively discussions on the four great Indian rivers, and to rivet the attention of geographers all the world over on this important problem â€” the sources of these rivers once again. Whatever may be the final outcome of such a searching enquiry, at this stage I cannot hut con- gratulate the author on his work which I am to concede is well-neigh an achievement, if it is borne in mind that he did all this single-handed, unaided by either the technical knowledge of a trained surveyor like Strachey or Ryder, or by the vast resources in men and money, like the great explorer Dr. Sven Hedin. I am certainly of opinion that his results would throw fresh light on the several problems relating to Tibetan geography and would usher in a new era when Indian geographers will once again take their rightful place amongst explorers of Tibet and the Himalayan regions.

Thank you Aurobindo Bannerjee for suggesting these rare books by Swami Pranavananda.