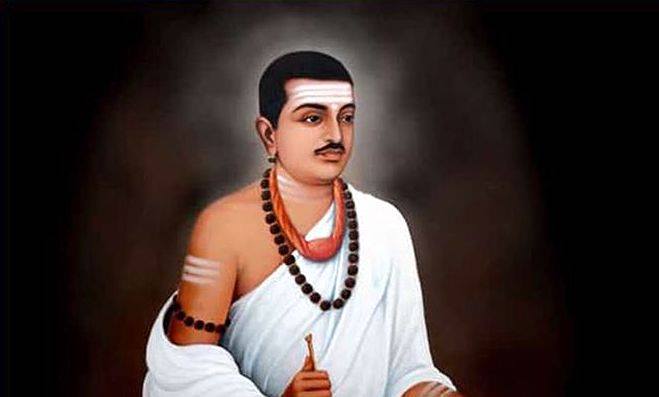 In presenting our â€˜free rendering" of Basava's vachanas we deem it necessary to give the reader an account of the life and times of Basava, his philosophy and his teachings. A mystic, a religious and social reformer, Basava was also an adept in statecraft; in sum, a unique personality. His followers, the Lingayats, number well over forty lakhs; and they are at present largely concentrated in the southern districts of the Bombay Presidency and the major states of Hyderabad and Mysore. The sweeping social reforms that Basava introduced are largely in evidence even to-day, though several centuries
have elapsed since Basava lived and moved and had his being. Further, as one of the pioneers of a novel form of literary expression, viz. vachana sahitya, Basava has left an imperishable mark in the history of Kannada literature.
Above all, Basava and his followers had to face, and to solve, social and religious problems almost identical in nature with those that are now confronting us and demanding an immediate solution ; and a knowledge of the way in which they tried to tackle those problems, and
the success or failure that attended their efforts, will therefore be of immense value to our own generation in the throes of a cultural rebirth.

A brief description of the political and social conditions of the times in which Basava lived should naturally precede any sketch, however short, of Basavaâ€™s life, for it will better enable us to understand the significance of his life and mission. In the eleventh and twelfth centuries of the Christian Era, there were many ruling dynasties in the various parts of Karnatak. Of these the most outstanding were the Chalukyas of Kalyan and the Hoysalas of Dorasamudram. It is a matter for pride that Karnatak has fairly maintained a creditable tradition of religious toleration so that instances of persecution on the part of the rulers of the Province are comparatively few and far between. Different communities were encouraged to live in amity side by side by the Karnatak kings of old whatever faiths they themselves professed. Hinduism and Jainism flourished one alongside of the other in ancient Karnatak. Among the Hindus, again, both the important sects of Saivism and Vaishnavism claimed their own innumerable adherents. Perhaps, as a result of the Muslim conquest of Northern India, particularly of Kashmir, in the earlier centuries, numerous North Indian Saivites, belonging especially to the Kashmir school of Saivism, migrated to these parts, and busied themselves with the spread of their own tenets. There were consequently two main divisions of Saivism, each with a number of sub-divisions of its own. The first concerned itself with the philosophical aspects of Saivism, while the other cult emphasized on the mystic and ritualistic aspects. Among the sub-divisions of the latter, the Kapalika cult deserves special mention. These latter cults one and all preached the worship of God Siva in his terrible aspects, and this again led this particular brand of Saivites to practice mystic and symbolic rituals, some awful, some revolting, all equally reprehensible from the
purely rationalistic point of view.

In the meantime Vaishnavism also received a fresh impetus in Karnatak owing to the conversion of Bittideva (or Vishnu Vardhana) of Hoysala dynasty to that faith by the great South Indian religious teacher, Ramanujacharya,
who, according to tradition, had found refuge in the Hoysala court from the persecution launched against the Vaishnavites by the Saiva ruler, Kulottunga Chola. Philosophical ideas drawn from the teachings of this Acharya about the nature of the soul and its relation to God began to influence various other sects, thus provoking endless discussions and forging new syntheses in the field of religion and philosophy.