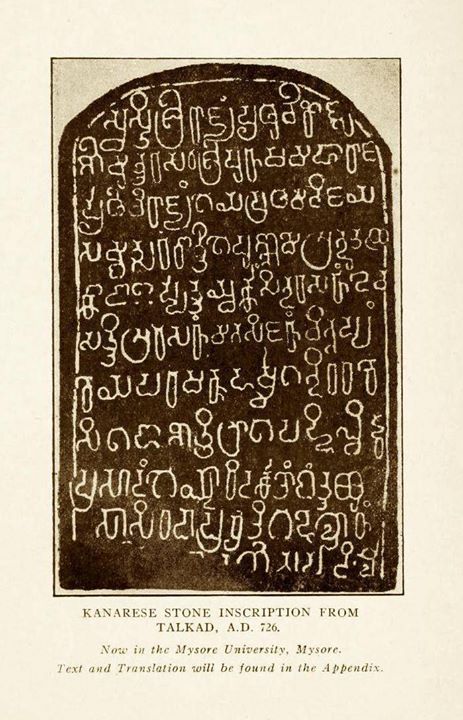 Fifty years ago very few, even of the Kanarese people themselves, had any idea of the range of Kanarese literature or of the relative age of the books which constitute it. Our present knowledge is the fruit of patient work on the part of a small number of painstaking scholars, who have laboriously pieced together the scattered information contained in inscriptions on stone and copper and in the colophons and text of palm leaf manuscripts.

It is the practice of Kanarese poets to preface their works, not only with invocations of the gods and of the saints of old time, but also with the praise of former poets. This practice is of very great historical value, for it enables
us to place the poets in their relative chronological order. As in many instances the writers received patronage from some reigning king, the mention of the name of the royal patron enables us further to give to many of the poets an approximately correct date. In this way a list of Kanarese
poets can be drawn up in fairly correct order. The result shows that Kanarese has a literature of vast extent, reaching back till its beginnings are lost in the mists of time in the early centuries of the Christian era.

The first modern scholars to give with any fulness a connected view of Kanarese literature were the German missionaries, Wurth and Kittel. The latter in 1875 prefixed a valuable essay on Kanarese Literature to his edition of Nagavarma's Prosody. Since then a vast deal of additional information has been obtained, more especially through the researches of Mr. Lewis Rice, CLE., Director of Archaeological Researches in Mysore, and his assistants and successor.

I am not aware that there is any separate volume in the English language giving a history of Kanarese literature. The most readable general account is to be found in Mr. Lewis Rice's Gazetteer of Mysore, Vol. I, and in his Mysore
and Coorg from the Inscriptions. Fuller details are contained in his introduction to Bhattakalanka's Karnataka Sabddnusasana, a bulky volume now out of print, and in the Karnataka Kavi Charite, or "Lives of the Kanarese
Poets," by Messrs. R. and S. G. Narasimhacharya, respectively Officer in charge of Archaeological Researches and Kanarese Translator to the Government of Mysore. The last-named work being written in Kanarese is available only for those who know that language. Only Part I has so far been
published, which carries the history up to the end of the fourteenth century. It gives illustrative extracts from the works described. The present popular account of Kanarese literature is based on the above-named authorities, to whom acknowledgement is hereby unreservedly made. Without their researches this work could not have been written.

The enumeration of a long series of little known writers cannot be other than tedious to the reader. I have endeavoured to mitigate this effect by introducing as much local colour as was available, and by sketching in as a background an outline of the times in which the poets lived and the atmosphere of religious faith and custom in which they moved. For
the sake of English readers I have also explained many Indian terms which require no explanation for the Indian reader.

By desire of the Editors, renderings have been given of a few illustrative passages from typical works belonging to different periods. In these, for reasons partially indicated in Chapter X, the attempt has been rather to ex-
press the general spirit of the original than to offer a closely literal translation. Graces due to alliteration, rhythm, vocabulary, and double meaning are, of course, lost in any translation.

The systematic historical study of Kanarese literature is of such recent origin, and every year is adding so much to our knowledge, that on numerous points there will soon be available fuller and more accurate information than that presented in the present volume. My brother, Mr.
Lewis Rice, has kindly read through the manuscript and made various suggestions.