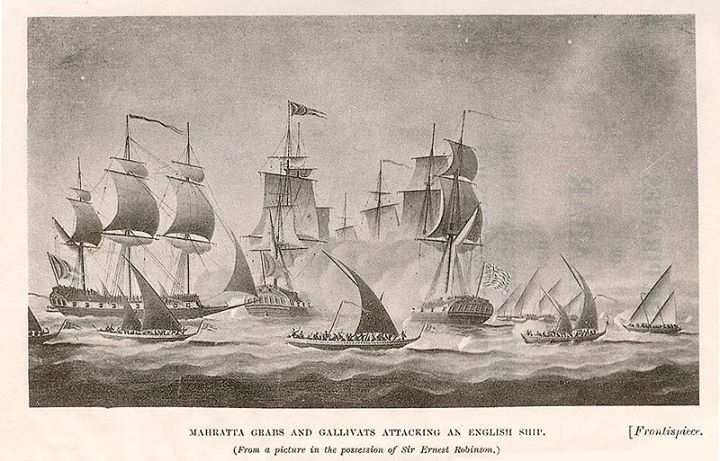 Essay:
Kanhoji Angre, the Maratha Admiral Who Defended Konkan from the Europeans!
by Tanvi Patel
Published in Better India - August 2, 2018

In the late 17th and early 18th century, when the British, the Portuguese and the Mughal Navy base of Siddis were using Indiaâ€™s vast coastline to enter the country, it called for an urgent need for Indian rulers to secure the naval bases. So far, Indian emperors had considered the sea to be a base only for trade, but now, as foreign powers were entering the country on their ships, the need to strengthen the naval branch of the military was paramount.

In the Konkan region of the then Maratha empire, Kanhoji Angre was the man for the job. He was the Admiral who had defeated the Dutch, the British and the Portuguese until his last breath, and defended the sovereignty of the Maratha rulers.

Even as Shivaji Maharaj Bhonsle, the Maratha king who ruled the Deccan areas of India, focused his dominance on the interior parts of India, his farsightedness had ensured a military base, albeit a small one, along the Konkan regions of Maharashtra.

This very step by Shivaji would prove to be a thorn in the side of the foreign powersâ€”in the form of Kanhoji Angre.

Angre was born in 1669 in the Ratnagiri district of Maharashtra. His family came from Angarwadi, Poona (which is how Kanhoji got the surname, Angre. His forefathers carried the name Sankpalâ€”guardians of a state called â€˜Vir Rana Sank.â€™

When Shivaji conquered the coastal regions of Konkan, he appointed Kanhojiâ€™s father to command the Suvarnadurg Fort there, in 1657. Kanhoji took birth on this fort and as fate would have it, went on to defend the coasts like he was born for it.

He grew up watching ships of the Maratha empire set sail from the coasts of Ratnagiri. Kanhoji even befriended the â€˜Koliâ€™ or fishermen community, who taught him the skills of the sea. In 1669, at the age of 19 years, Kanhoji was appointed as the Surkheel or Darya-Saranga (Admiral) â€œby royal command in independent charge of 150 miles of wide-open coastline.â€

This was in 1698, 18 years after Shivajiâ€™s death and under the reign of Tarabai. When appointed as the Admiral, Kanhoji had just ten ships under his command. He developed his Navy from that strengthâ€”using the forest cover in Konkan to build his ships and the expertise of the fishermen in building man force.

The rise of foreign trade in the Arabian Sea was still not a cause of worry for Kanhoji.

Even if the Portuguese, British or Dutch entered the country, he might not have risen arms against them, but then the Portuguese tried to dominate over the sovereignty of the Maratha empire.

The Maratha Navy attacking British ships. Source.
According to Michae Snyder, â€œThanks to their undisputed dominion over trade routes across the Indian Ocean, the Portuguese had long demanded that all ships pay for and carry official papers in exchange for (mostly nominal) protection against the European pirate marauders plying the trade routes carrying spices and luxury items from India to Europe across the Indian Ocean.â€

Kanhoji waited until his own Navy was established and imposed his registration process called â€˜dastak.â€™ He offered rewards that were nominal, just like the Portuguese did, and seized every ship that landed on the Konkan coast without the proper registration papers.

This was the first time that Indian powers had resisted the European dominance on the sea. But the Europeans, after all, had challenged the Maratha sovereignty and they needed to be taught a due lesson.

Shivajiâ€™s territorial tactics highly influenced Kanhojiâ€™s strategies to fight the mighty profoundly of the Portuguese and the British.

Since he did not have enough resourcesâ€”human or arsenalâ€”to attack them head-on, Kanhoji used guerrilla tactics to win his battles.

He never strayed far away from the coast since the land provided several benefits for his army, and used the element of surprise to attack the European ships, defeat them and run away from the routes he knew best. The Europeans, for a long time, could not keep up.

You may also like: Naiki Devi, the Gujarati Queen from Goa Who Defeated Muhammad Ghori

These tactics and subsequent loots of the European vessels had earned him the name â€˜Prince of Pirates,â€™ but all Kanhoji was doing was defending the Maratha sovereignty against foreign powers.

Eventually, in 1713, Kanhoji signed a treaty with Aislabie, the then President of the East India Company (EIC) calling for a truce and agreeing to let all vessels, carrying the company papers to be let on tallowed Konkan coasts without having to pay any dastak.

However, in 1715, Aislabie returned to England and was replaced by Charles Boone who went to show his own dominance on the Marathas.

He demanded that all vessels that carried the company goods, irrespective of whether they had proper company papers or not, be allowed to the ports without interference. This invited the wrath of Kanhoji who restarted his guerrilla loots against the EICâ€™s ships after this disrespect to the treaty.

From 1715 to 1729, until his death, Kanhoji went on to defend his ports, attacking enemy vessels and rendering each of their attacks completely useless. The British never succeeded in any of their attacks. Kanhoji even resorted to keeping hostages, looting and setting surprise attacks on the Europeans.

In fact, KKN Kurup says, â€œBy 1727, Kanhoji Angreâ€™s naval supremacy in the coastal waters was at its peak. He captured many English, Dutch and French ships. It is stated that Kanhojiâ€™s piracy caused the East India Company and annual expenditure of 50,000 pounds in protecting their trade against it.â€

If we take a neutral look, Kanhoji was not far from being a pirate. However, from his own position, he was defending the ports that the Europeans were expecting to dominate, without any interference.

After his death, his son, Sekhoji took over the Navy command, but the force was never as strong before Kanhoji, and would never be, after him. Sekhoji continued his fatherâ€™s legacy up until 1733 when he died. But that would also mark the end of Kanhojiâ€™s coastal defence system.

Owing to internal politics against the Peshwas, who were in power in the interiors of India, the Maratha Navy suffered heavy losses after Sekhojiâ€™s death. The holdings were split between Sambhaji and Manajiâ€”the former being Kanhojiâ€™s younger legitimate son and the latter, his illegitimate son. The Maratha empire too was not keeping up its Naval defence and the British found it increasingly easier to penetrate through India.

And the rest, as they say, is history.

Kanhoji Angre was the chief of the Maratha Navy in 18th century India. In historical records, he is also known as Conajee Angria or Sarkhel AngrÃ©. Kanhoji fought against the British, Dutch and Portuguese naval interests on the coasts of India during the 18th century Kanhoji Angre, Maratha Admiral