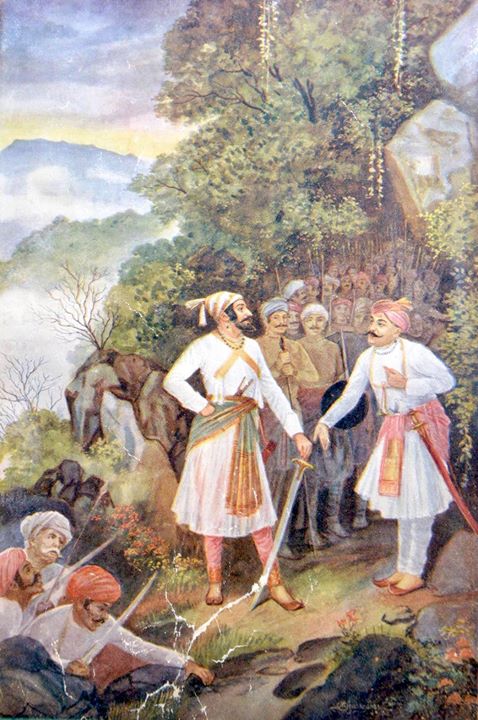 Digital Rare Book:
The Life of Shivaji Maharaj - Founder of the Maratha Empire
By Nilakant Sadashiv Takakhav
Adapted from the original Marathi work written by K. A. Keluskar
Printed at The Manoranjan Press, Bombay - 1921

AT a time when the whole of the Indian Continent is entering upon a new phase of political life and bold schemes of social and political re-construction are being daily pressed for acceptance, no apology would seem to be necessary for the publication of a new life of Shivaji. For among the glittering multitude of mighty kings whose names adorn the pages of Indian History, the name of Shivaji stands forth in bold relief as the author of a momentous national revival that changed the destinies of India. And this is a fact allowed by all historians, even though the editors of the Rulers of India Series have chosen to ignore him and denied him a place in their Series, while including many other â€œRulersâ€ who were more or less mediocrities, when compared with the great Shivaji. If ever in the pre-British period of Indian History, there was anything that might be compared with the great national movements of Western countries, it was the political movement which laid the foundations of the Maratha Swarajya. And that movement would have been utterly destitute of all. its national glory and significance, were it not for the genius and originality of one master mind who presided over the whole event, built a nation out of chaos and breathed life and purpose into the dead clay and disjecta membra of Maharashtra society and institutions.

Such a man was Shivaji. Of the empire which he built up, only a few fragments have escaped the ravages of time. The rest has crumbled down and gone the way that all great empires in the world have gone. But the spirit of it has remained behind. He has left no pyramids, no rock-cut temples, no architectural marvels to attest his greatness. But the name of Shivaji still lives to kindle and inspire the growing manhood of Maharashtra.

Inspired by the stirring events of the late war, when the Maratha soldiers were called upon to display their native valour on the battle-fields of the West, this work was undertaken at the special request of the author of the Marathi original, as a grateful tribute to the genius of the founder of the Maratha nation. At the time when this work was undertaken, there was no worthy biography in the English language of the life and career of the great King who during the night of Mahomedan despotism dreamt the dream of national independence and realized it. It seemed a standing reproach to the Indian community, with their newly awakened political consciousness, that there should be no biographical record, commensurate with the greatness of the national hero, in that language which has done more than anything else to unite us into a nation and stimulate our national aspirations.

This English version was taken in hand about seven years ago. As the work proceeded it was found necessary to make considerable alterations in the original Marathi text of Mr. Keluskarâ€™s Life, as published in 1907. It was found necessary to take notice of the mass of new material and discoveries which have accumulated in the course of the last fourteen years. In its final draft the present English version has practically become a new and independent work and has already served as a basis for the second Marathi edition, which in a revised and considerably enlarged form, as compared to the first edition, was published by Mr. Keluskar early in 1921. This work has been thoroughly revised and retouched from time to time during the last seven years. It is quite up-to-date, so far as our knowledge of Shivaji and the men and things of his time extends and the conflicting theories that have been proposed as regards the purpose or policy for which he strove and the men of wisdom or action who counselled or co-operated in his plans.

While the preparation of this work was in its various stages of progress, three important English works on Shivaji appeared in print, one of which has already gone into a second edition. Some explanation would seem to be necessary to justify the publication of a fourth work on the same subject. The first and obvious answer is that none of these works can be called a faithful biography of Shivaji, that is to say, a biography which is at once full and exhaustive and traces the development of his life-work from beginning to end in chronological order. The work of Mr. Kincaid reviews the work of Shivaji as a fragment of the History of the Maratha People, that of Prof. Jadunath Sarkar discourses upon â€œShivaji and his Timesâ€ and often forgets the hero while discoursing upon his â€œTimesâ€, that of Prof. Rawlinson is avowedly a monograph, too meagre in its scope to comprise the life-work of a great hero like Shivaji. The thanks of the Maratha reader are due to all these scholars for the new light they have thrown on many obscure points in the life of their national hero, and to Prof. Rawlinson and Mr. Kincaid in particular for the generous way in which they have interpreted the motives and character of the great King. The earliest of this triad is the Life of Shivaji by Principal Rawlinson. It is a generous appreciation of Shivajiâ€™s work and character. But the monograph, besides being too meagre in size for the magnitude of the task, devotes a good deal of its contents to discussions upon somewhat irrelevant topics. The impression that remains after a perusal of the book is that the authorâ€™s purpose is to show that the new era of Shivaji after all inaugurated a new type of bureaucracy, and the author seems to suggest that from the times of Ashoka and Chandragupta down to present times, the bureaucratic form of government has prevailed in India and must inevitably prevail for all time. The author forgets that there are bureaucracies and bureaucracies and that a bureaucracy with a Shivaji at its head ceases to be a bureaucracy, both in form and substance. Mr. C. A. Kincaid, who writes in collaboration with Rao Bahadur D. B. Parasnis, has devoted some 170 pages of the first volume of his History of the Maratha People to the story of Shivaji. The authors have taken little notice of the stirring events of the career of Shahaji and have chosen to ignore many a controversy which has caused an acute tension of feeling among scholars. This history is full of legends and folklore tales and apparently attaches as much importance to them as to matters of serious history. Its highest virtue is its picturesqueness. Although Mr. Kincaid has repeated the orthodox version as to the date, when Shivaji enrolled himself as a disciple of Ramdas Swami, it is some consolation to think that Mr. Kincaid has not allowed the infatuation of the Ramdas cult to blind him to such an extent as to ascribe to the preceptor the credit of Shivajiâ€™s glorious achievements. He has had sense enough to see, as some patriotic and over-zealous Maharashtra scholars have not that such a representation of the relations between the preceptor and the disciple would reduce the national hero to a mere puppet. The supreme merit of Mr. Kincaidâ€™s work is his enthusiastic and unreserved admiration of the Maratha people.

Prof. Jadunath Sarkarâ€™s â€œShivaji and His Timesâ€ is the last of this triad. It is a noble work marred with strange flaws. Mr. Kincaidâ€™s History and Prof. Sarkarâ€™s Shivaji stand at two opposite extremes of historical method and style. The one is romantic in conception and uncritical in method, the other is hypercritical in method and sceptical in its intellectual outlook. The merits of Sarkarâ€™s work are great. He has had access to a wealth of Mahomedan and British sources and authorities, the very existence or which had not been previously suspected. The fundamental fault of the work is that it appears as an overflow of the vast amount of historical material he had collected for his monumental work upon Aurangzeb. His sympathies are with the Moguls and the commanders of the Mogul empire. His sympathies are with the British factors at Surat and Rajapur. His sympathies are anywhere except with Shivaji and his gallant companions. Shivaji has fallen into the back-ground. Sarkarâ€™s pÃ¦ens of praise are poured forth in unstinted measure, now in honour of Shaista Khan, now in honour of Jay Singh. He conducts his reader into the Mogul camp, he brings him in the wake of the Mogul armies and the Mogul standards. Shivaji is at best patronised here and there with a nodding familiarity and spoken of as a familiar underling with the name of â€œShivaâ€. This is not intended, but such is the effect produced. The critical estimate of Shivajiâ€™s character and work in the last seven pages of this work is an appreciative review of the character and life-work of the great King and is, strange to say, quite at variance with the hyper-critical denunciations expressed in the fourteen pages that immediately precede it, and on the whole gives the lie direct to many of the generalizations which are found interspersed in the earlier part of the work. By far the most valuable service rendered by Prof. Sarkar is his vindication of Shivaji from the charge of murdering Afzul Khan. Again he has not fallen into the error of exaggerating the influence of Ramdas Swami upon Shivaji. Indeed he seems to have gone to an opposite extreme and failed to recognize, in anything like a proper estimate, the intense spirituality of outlook which distinguished Shivaji among the nation-builders and rulers of India. Finally, it must be said of Prof. Sarkarâ€™s work that it is arranged in too scrappy a manner to suit the purposes of a serious biography and hence arise the contradictions which are noticed above.