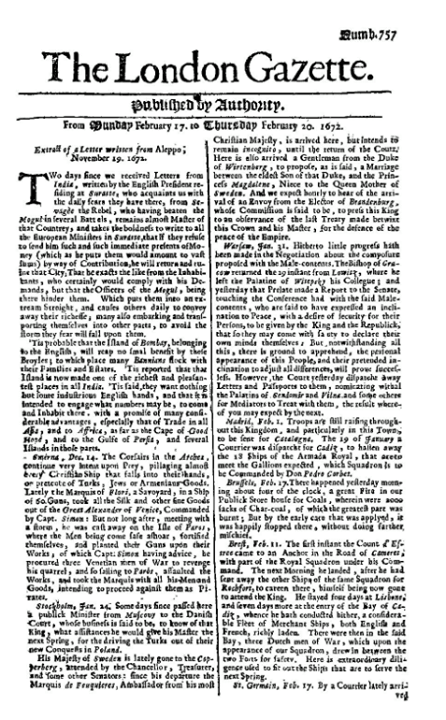 Digital Rare Newspaper :
Shivaji in Surat
Published in The London Gazette - From February 17 to February 10, 1672

Transcript:
The London Gazette.
Published by Authority
From Sunday February 17. to Thursday February 20. 1672

Extract of a letter written from Aleppo;

TWo days since we received Letters from India, written by the English President residing in Suratte, who acquaints us with the daily fears that have there, from Sevagée the Rebel, who having beaten the Mogul in several Battels, remains almost Master of that Countrey, and takes the boldness to write to all European Ministers in Suratte, that if they refuse to send him such and such immediate presents of Money (which as he puts them would amount to vast sums) by way of Contribution, he will return and ruine that City. That he exacts the like from the Inhabitants, who certainly would comply with his Demands, but that the Officers of the Mogul, being there hinder them. Which puts them into an extream Straight, and causes others daily to convey away their richesse; many also embarking and transporting themselves into other parts, to avoid the storm they fear will fall upon them.

‘Tis probable that the Island of Bombay, belonging to the English, will reap no smal benefit by these Broyles; to which place many Bannians flock with their Families and Estates. ‘Tis reported that that Island is now made one of the richest and pleasantest places in all India. ‘Tis said, they want nothing but some industrious English hands, and that it is intended to engage what numbers may be, to come and inhabit there with a promise of many considerable advantages, especially that of Trade in all Asia, and to Africa, as far as the Cape of Good Hope, and to the Gulfe of Persia, and several islands in those parts.

Researcher finds reference to Shivaji Maharaj in foreign newspaper Express News Service : Pune, September 17, Thu Sep 18 2008 A reference to Chhatrapati Shivaji Maharaj as a Master of the Country (India) has been found in a newspaper, "The London Gazette" in its issue dated February 1672 by a Pune-based researcher recently. Interestingly, the news is based on the extract of letters of the then Surat Governor. Shivaji has been referred as "Shivaji, the rebel, who having beaten the Mogul in several battles, remains almost Master of the Country." Saili Datar, a researcher in history found the copy of "The London Gazette" in the British Museum in London. She claimed that it was the first such reference found by any researcher which had appeared in the newspapers of that time. "The reference of Shivaji Maharaj is in the context of the famous incident of Surati Loot of 1670. The report is written on the basis of letters sent by the Governor of Surat to Aleppo describing the condition of Surat in 1672," said Datar. "The report also analyses the condition in Surat and there is a reference that due to plundering of Surat by Shivaji Maharaj the British rulers were forced to shift their trade base to Bombay from Surat," she added. "There are some letters available of British officers dating way back to the 17th century in which there is a reference to Shivaji Maharaj. But his reference in the newspapers were not found previously," said senior researcher Gajanan Mehendale, who also acknowledged the efforts of Saili Datar. He, however said that there might be more such newspapers available. The London Gazette was first published on November 16, 1665 as the Oxford Gazette. After the return of King Charles II in February 1666, it's title changed to The London Gazette. "It is described as the first English newspaper because of its format as a single sheet printed on both sides," informed Datar. Datar is an electronics engineer and works in the field of environment. She developed a liking for history when she became a member of the library Bharat Itihas Sanshodhak Mandal. Datar has completed diploma in Indology from Tilak Maharashtra Vidyapeeth and is at present learning Persian at Bharat Itihas Sanshodhak Mandal. "Gajanan Mehendale was instrumental in showing me the path. I got the chance to go to London where I researched at the British Museum and found these documents which may prove to be helpful in further research on Shivaji Maharaj," said Datar. What it says An extract of the letter written from Aleppo, which had appeared in The London Gazette of February 1672: "Two day since we received Letters from India, written by the English President residing at Surratte (Surat) who acquaints us with the daily fears they have there, from Sevagee (Shivaji Maharaj), the Rebel, who having beaten the Mogul in several battles, remains almost Master of Countrey, and takes the boldness to write all the European Ministers in Surrate (Surat), that if they refuse to send him such and such immediate presents of Money (which as he puts them would amount to vats sums) by way of Contribution, he will return and ruine that city; That he exacts the like from the Inhabitants, who certainly would comply with his demand, but that the officers of the Mogul, being there hinder them. Which puts them into an extreme Streight, and causes other daily to convey away their richness; many also embarking and transporting themselves into other parts, to avoid the storm they fear will fall up on them" Source: http://bit.ly/2XB3eMT

Love your effort. Good on you.

Difficult to read the above original piece....but very gratifying. Rebel indeed..!! Fighting for your freedom from foreigners is a...NOTE..."Fight for Freedom". And we are indebted to them for our existence and self respect today.

Thank you so much for sharing

Don't forget to read the extract about Sevaagee....