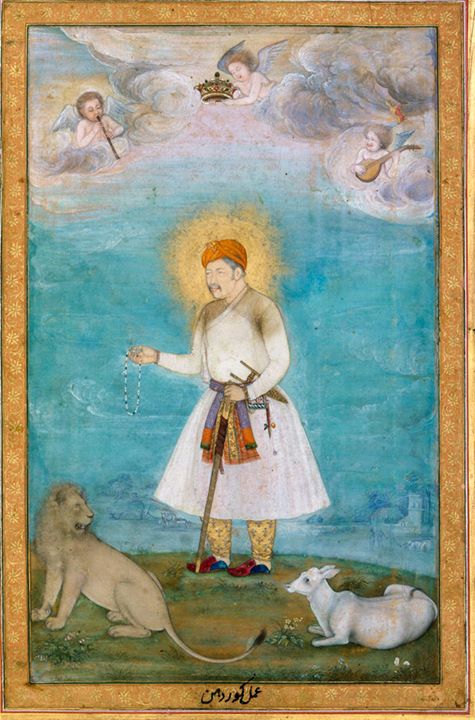 Digital Rare Book:
The AIN I AKBARI
By Abul Fazl Allami
Translated from the Original Persian by
H.Blochmann
Published by The Asiatic Society of Bengal, Calcutta - 1873
Volume 1

On empire-building, management of diversity
By Raziuddin Aquil
Published in Sunday Guardian - June1, 2019

The search for peace in violent political times takes us back to Indian history for some insights from political conquests, political theory, governing principles and resolution of community relations. The pluralistic form of society is historically marked by ethnic and religious multiplicity and respectful coexistence, with concerned scholars and thinkers speaking out for the rights of even those languishing at the bottom of a regressive social hierarchy and political marginalisation.

The medieval and early modern period of Indian history witnessed broadly an inclusive framework of political ideas, theories and practices adopted by Mughal emperors like Akbar. By contrast, rulers like Aurangzeb drew on narrow sectarian ideologies, especially invoking the name of Sunnite Islam for legitimising some of the outrageous political aggrandisement. Violence was possible in the wake of conquests and empire-building, but medieval works on political theory advocated minimum use of force under all circumstances. To cite the well-known example, Abuâ€™l Fazlâ€™s Akbarnama and Ain-i Akbari articulated Mughal political ideology on how to govern a vast sub-continental country with so much diversity, especially for resolving the question of religious assertions through emphasis on broad-based governing principles, conceptualised as peace with all. It was understood that political conquests might involve episodes of violence, but governing principles of the state had to be inclusive and just, offering space for all the heterogeneity to respectfully coexist.

The examples of what medieval rulers did can serve as useful insights. Considerable political sagacity was displayed in handling the people, traditions, customs, religions, languages, and diverse ways of living which have survived till modern times. Caste-based social stratification was not disturbed and sections of assertive communities were continually incorporated in the political system. Traditional and customary practices were dealt with in such a manner that the communities concerned did not feel threatened. Linguistic and ethnic pluralism were intelligently handled, evoking strong faith in the protective umbrella of the state. With strong commitments to justice for all, rulers themselves acquired or were accorded divine-like characteristics, which also meant combining the contradictory qualities of enjoying unlimited power, yet displaying amazing magnanimity and forgiveness to those seeking protection.

Even though much violence, bloodshed, and destruction were possible during the conquests, once the opponents were defeated in the battlefield, the former rivals were co-opted and allowed to work as subordinate or trusted allies. Emphasis on protecting human resources and talents was recommended in works of political theory and also seen in practice. Places of worship too were protected, with only ones caught in political struggles were targeted. Rulers who are reported to have demolished some places of worship also gave generous grants for maintenance of religious establishments of the same communities who were seemingly affected by aggressive vandalism. No wonder, some of the finest religious buildings have come down to us from medieval times.

Intersecting political and cultural domains, Sufi-Bhakti complex also preached peaceful coexistence and tolerance of other peopleâ€™s religious beliefs and practices, which further explains the amazing diversity we have inherited. In this context, we need to take cognisance of cases of belligerent sectarianism, complex identity formation, questions of conversion, and occasional attempts to abuse political power in the name of religion. Unlike early modern Europe where the emperors had realised that since they had the resources to conquer and build an empire they had the power to control and govern also, medieval and early modern Indian rulers continued to seek religious legitimacy for political action, which meant state could not be properly secularised, nor was religion made a private or personal matter of individuals. As a result, the state continually abused religion for asserting its power, and in return religion threatened the governing principles of the state. This tricky relation between politics and religion always needed a sane, balanced and careful handlingâ€”ensuring governing principles were privileged over sectarian considerations.

Thus, we need to know specific cases of religious justification of violence during battles for conquests and state-building, examine political principles and frameworks (since the conquerors needed to come down from their horses and establish their rule), and understand continuous attempts at resolving religious and cultural tensions. This will help us move away from the usual binary: either celebrating or condemning political violence and bloodshed, or completely denying the cases of violenceâ€”emphasising, instead, the struggle for peace as actual example of peaceful community relations. Violence cannot be the order of the day, which is the very reason why we need states and governments, and yet those in the business of politics and power need to be regularly reminded of this important responsibility. History has for long taught us mass violence and genocide are to be banished for some sanity in society. Political madness of the violent kind can only be an aberration and not the norm.

Image:
"Akbar With Lion and Calf", Folio from the Shah Jahan Album

Artist: Painting by Govardhan (active ca. 1596â€“1645)
Calligrapher: Mir 'Ali Haravi (d. ca. 1550)
ca. 1630
This posthumous portrait of Akbar incorporates the Elizabethan-derived motif of a lion and calf living in peace under the emperorâ€™s benign rule. Govardhan, a master of psychological portraiture, has given the calf an air of meek nervousness, as expressed in its sideways glance and lowered ears, due no doubt to the proximity of the lionâ€™s visible teeth. Cherubs above and a Netherlandish background add cosmopolitan touches in vogue at the time.

Just what i was searching for...