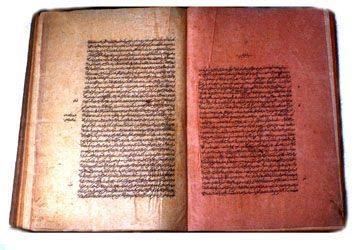 Digital Rare Book:
Majma-ul-Bahrain or
The Mingling of the two Oceans
By Prince Muhammad Dara Shikuh
Edited and translated from the original Persian by M. Mahfuz-ul-Haq
Published by the Asiatic Society of Bengal, Calcutta - 1929

Majma-ul-Bahrain (Hindi: à¤®à¤œà¥à¤® 'à¤‰à¤² à¤¬à¤¹à¥ à¤°à¥ˆà¤¨', Urdu: Ù…Ø¬Ù…Ø¹ Ø§Ù„Ø¨Ø­Ø±ÛŒÙ†â€Ž, "The Confluence of the Two Seas") is a book on comparative religion authored by Dara Shukoh. It was devoted to a revelation of the mystical and pluralistic affinities between Sufic and Vedantic speculation. It was one of the earliest works to explore both the diversity of religions and a unity of Islam and Hinduism and other religions. The book was authored as a short treatise in Persian in 1654â€“55. Its Hindi version is called Samudra Sangam Grantha.

Image:
A page from Majma-ul-Bahrain (a book on comparative religion by Muhammad Dara Shukoh) in the manuscripts collection at the Portrait Gallery of Victoria memorial, Calcutta.