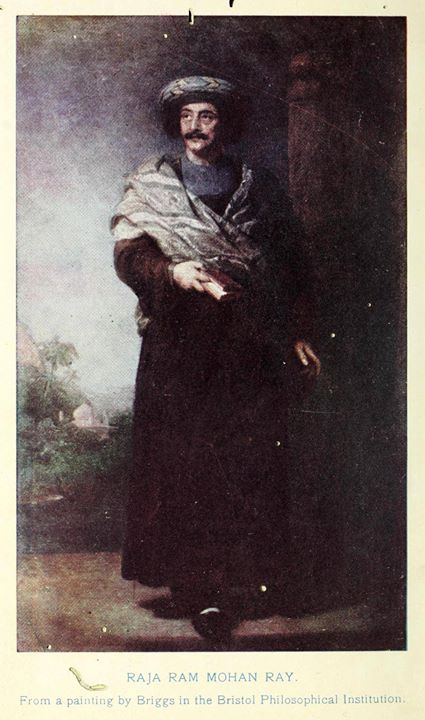 The Rajah Rammohum Roy was, in the land of his birth a man greatly before his age. He was a light shining in thick darkness, â€” palpable, â€” impenetrable by its rays ; â€” its lustre served only to make the surrounding gloom more visible. Hence he was appreciated during his life by very few of his countrymen, and his death appeared at the time to excite but little regret in India. It was to England that he turned for encouragement, sympathy and help, for Englishmen had shown that they comprehended in some degree the greatness of his spirit, and admired the purity and devotedness of his life. From England, therefore, he sought for aid in his efforts to regenerate his country ; â€” he hoped after visiting her shores, and gathering strength from communion with the wise and good among her citizens, to return to India, armed with fresh power, guided by new light to accomplish the great purpose of his life.

It was otherwise ordered, for the fit time was not come. His earthly warfare was accomplished ; he was permitted to retire from the battle of life, and to lie down to rest where all that was mortal of him would be regarded as a sacred deposit, and where the memorials of his spirit would be honoured and cherished. Long years required to roll by, and many changes to take place in India, before his country should be prepared truly to appreciate the great Reformer.

More than a quarter of a century has now passed and the name of Rammohun Roy begins to be reverenced as it ought to be in his native country. The seed which he sowed was long in germinating, but it never lost its vitality. He who had scattered it with no sparing hand, whether in the highways, in stray places, among thorns and brambles, or in good ground, was not permitted even to see it spring up, but having faithfully done his work, left it in charge of the Great Husband-man. The seed has sprung lip and grown, man knoweth not how, â€˜for the earth bringeth forth fruit of hefself, first the blade then the ear, after that the full corn in the ear.â€™ While but a very few rallied around their great Reformer in his unwearied efforts to draw away his countrymen from idolatry and superstition, and but one temple then rose among the Hindoos dedicated to the pure worship of one only God, â€” now there are thousands, and perhaps even tens of thousands who have emancipated themselves from the thraldom of idolatry and superstition, and in many houses of worship is proclaimed "the Fatherhood of God and the Brotherhood of Man.â€

The progress of improvement and the chain of events, linked together by the unerring hand of the Supreme Ruler, has led several of Rammohun Royâ€™s countrymen to follow his example and to visit our shores. Many young Hindoos have come to England to become acquainted with English men and women in their private and public work, and in their homes, â€” to study our laws and our institutions, â€” and thus to qualify themselves on their return to India to transplant there what they have found most deserving of imitation among us. It is at the request of some of them that this volume has been prepared. The privilege of paying such a tribute to the memory of so noble and excellent a man, is highly valued by one who knew him personally, and who has always treasured with reverence the recollection not only of his devoted efforts in the cause of religion and virtue, but of his estimable qualities an purity of life. She regrets that she cannot make this work more worthy of him from causes which will appear in the course of the narrative she hopes, however that this volume will be kindly received both by his countrymen, and by those who respect his name in England, and that it very deficiencies may give rise to a more complete memoir of him, and lead to a greater knowledge of his works. For this his countrymen are no prepared. The following words of one of them express the sentiments of all who know and respect their greatest man, the Rajah Rammohun Roy : â€”

â€œIt is now more than fifty years, that, in Bengal there arose a genius, like a solitary star in a night of darkness, who, in spite of great opposition an persecution, gave the death blow to gross idolatry and superstition, which had degenerated the great Hindoo nation. When we consider the debased state of religion and society in those days, we find that Rammohun Roy was one of those men who have made their appearance from time to time in the world to be the enlighteners of nations, and protect men from forsaking fruth. We can trace the infinite wisdom and mercy of Providence the fact, that at times, when nations sink in vice and error, individual men are sent, who, by the force of their intellect, the purity of their character, and the earnestness of their motives, succeed bringing men to the paths of virtue and righteousness. In order to judge rightly of such men, we should carefully consider the times in which they lived, the state of society in which they were brought up, and the obstacles and difficulties which surrounded them â€” thus we find Rammohun Roy to have been, not only a great and good man, but one whom future generations of his countrymen must regard as the FIRST HINDOO REFORMER."