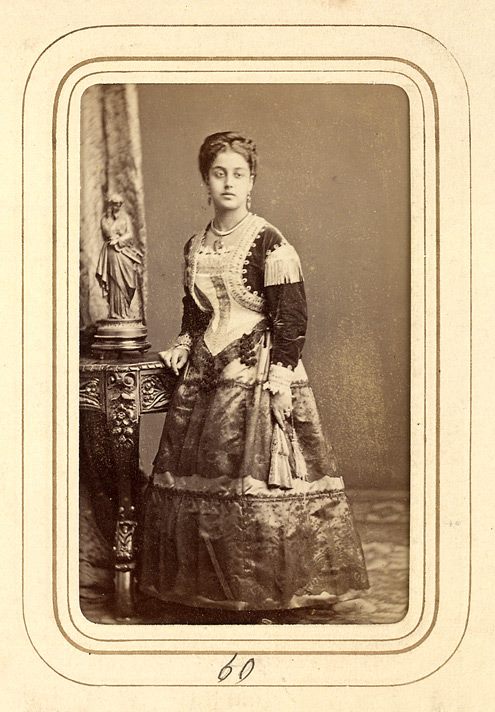 Image:
Full-length carte-de-visite portrait of a Jewish lady in European dress probably taken in the Bourne and Shepherd studio in Calcutta, in the early 1870s. The earliest association of the Jews with Calcutta goes back to transient Jewish merchants from Fort St. George (Madras) who established commercial contact with Bengal towards the end of the 17th century. A permanent Jewish settlement came into existence only at the beginning of the 19th century when Arabic-speaking Jews from Syria and Iraq who had previously resided in Surat settled in Calcutta. Slowly it became a popular and flourishing cultural and economic centre of Jewish life in India, with Jews from other parts flocking here. The Synagogue in Calcutta was built in 1831 and was probably the largest in the East. Political and economic changes after World War II led to the economic decline of the community in Calcutta. Also through emigration to the West and Israel, the once large and prosperous community became very small group of Jews (around 700 in 1969).

https://en.m.wikipedia.org/wiki/Ohel_David_Synagogue This says the Pune synagogue is the largest in Asia.

there was a time when the jews (in India) were treated on par with other natives-they were subjects of 'scientific scrutiny and evaluation' :https://books.google.co.in/books?id=ZPpUY4V-XN4C&pg=PP7&lpg=PP7&dq=AES+Nambutiris+Fred+Fawcett&source=bl&ots=-VWdtNv8I4&sig=1-C-Igeml9UnIqGjqIzToEvgv5o&hl=en&sa=X&ved=0ahUKEwj82ujarfXUAhXLOY8KHWJTA0QQ6AEIMjAC#v=onepage&q&f=false

Wish that I could get a copy of this book.