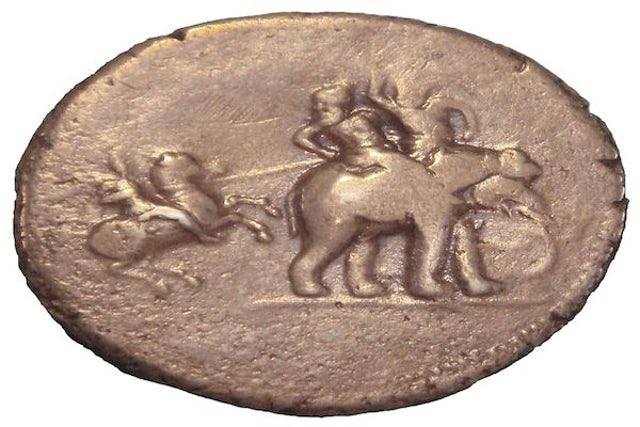 With a long history of invasion and colonialism, Indians are used to looking at themselves with the gaze of the “other”, especially if we live in an English language- centred universe. 400 years of Eurocentrism has given us a skewed and distorted idea of ourselves. It is worth noting, however, that India’s contacts with the world outside dates to much before this; to thousands of years ago, during the times of the civilisation on the banks of the Sindhu and the Saraswati, and they have been sources of its function as a cradle of universal ideas.

The Christian Western contacts with India are well documented. Here, it will be interesting and instructive to look at pre-Christian ideas and exchanges between India and the West. One of the most important treatises of a visitor from the Western world dates back to Mauryan times.

The oldest and most comprehensive record we have on India comes from Megasthenes, the Greek ambassador from the court of the Seleucid Emperor to that of Chandragupta Maurya. He wrote the Indika, a description of India, based on his sojourn. Megasthenes was a companion of Alexander of Macedon on his short-lived invasion of North Western India and had lived with Sibyrtius, the satrap of Arachosia, after Alexander’s death and during the fight of the Diadochi. On the establishment of friendly relations between Chandragupta and Seleucus, he was sent as an ambassador to Chandragupta’s court by the latter.

Sandrocottus has been mentioned by him in the Indika and has been identified with Chandragupta Maurya, placing the book squarely in fourth century BCE. (A caveat: the dating and chronology of Ancient Indian history is based on some seminal but problematic “identifications” which merit separate study).

Strabo, Arrianus and Klemens of Alexandria tell us most of what we know about Megasthenes’ life. Klemens informs us that he was a contemporary of Seleucus, Strabo that he was sent to Chandragupta Maurya’s court at Pataliputra and Arrian that he lived with Sibyrtius at Arachosia, and frequently visited Chandragupta’s court. Reportedly, he had even met Chandragupta himself.

Indika itself, modelled on Hekataios’ Aegyptiaka , was either in the Attic or Ionian dialect and was divided into four sections. Megasthenes wrote down descriptions of the country, its soil, climate, animals, plants, government, religion, manners of the people, arts, etc. In short, a detailed description from the king to the remotest tribe.

Over time, the book itself was lost. However, Greek and Roman writers— Diodorus, Strabo, Arrian, Eratosthenes, Pliny and many others— have quoted from his book over millennia. Its fragments lay scattered but, in 1846, Professor Schwanbeck of Bonn collected the scattered fragments and published them as a reconstructed Megasthenes’ Indica in Latin and Greek. In 1877, J.W. McCrindle published, for the first time, an authoritative English translation which remains a resource although it has been the subject of many critiques since then. What is the relevance of this book today?

For one, it is the earliest surviving and most comprehensive description of Ancient India by a foreign visitor— the first in the tradition of visitors such as Fa Hien, Hiuen Tsang and Al-Biruni who have provided valuable insights into the position of the country at the relevant time. Apart from its role as an invaluable resource for Indian antiquity, Indika’s influence on other Roman and Greek writers, and on their scientific knowledge, has been immense. It was not written “on the run”, so to speak, as snippets of information from Alexander of Macedon’s other companions were written, but was designed as an encyclopedic study of the country.

To provide a flavour of the book, here is an extract from the second book of Diodorus who has quoted an epitome or a kind of typical extract, a summary of Megasthenes’ Indika.

Good one. And don't miss the latest " Indica" - a new book on India by Prannay Lal . Astonishing insights on an antique land. ( http://www.livemint.com/Leisure/NRU9tuZ5sOxspVKVw8tY7N/Book-review-IndicaA-Deep-Natural-History-Of-The-Indian-Sub.html )

Alexender Coin with Elephant and Horse.

Please can you make these books available? I have been hunting for them on the net in book stores for years

does... is that elephant wearing a tiger hat? because that's awesome.