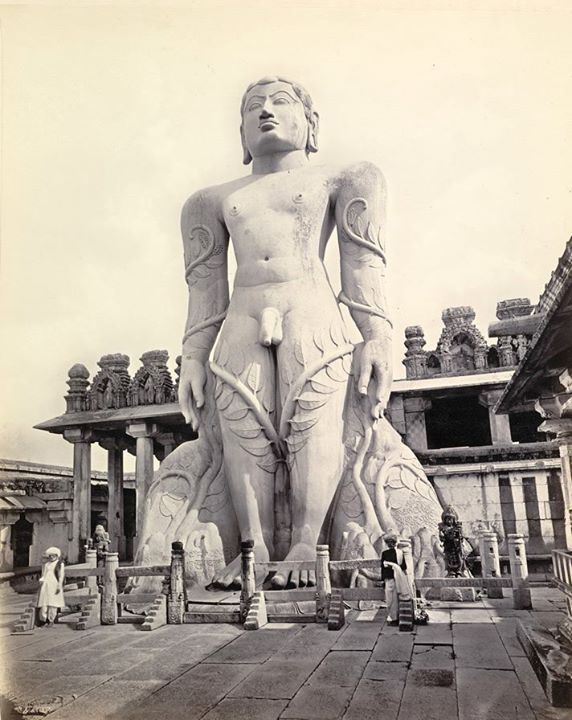 Though territorially a small kingdom, the Western Ganga contribution to polity, culture and literature of the modern south Karnataka region is considered important. The Western Ganga Kings showed benevolent tolerance to all faiths but are most famous for their patronage towards Jainism resulting in the construction of monuments in places such as Shravanabelagola and Kambadahalli. The Kings of this dynasty encouraged the fine arts due to which literature in Kannada and Sanskrit flourished. Chavundaraya's writing, Chavundaraya Purana of 978 CE, is an important work in Kannada prose. Many classics were written on various subjects ranging from religion to elephant management. (Source: Wiki)

Shravanabelagola temple is located in Hassan district on top of Vindyagiri hill, about 50 km Southeast of Hassan, and about 150 km southwest of Bangalore. It is a famous centre of pilgrimage for Jains, and contains a massive statue of Bahubali, the first Jain Tirthankara to have gained salvation. The statue is more than 1000 years old and was erected in 983 AD by Chamundaraya, a general in King Rachamalla’s army. Shravanabelagola means literally the white tank of the ascetic and gets its name from the tank below which looks silvery, while the reference to ascetic is Bahubali. Shravanabelagola temple is approached by climbing more than 600 steps which have been hewn out of the rocky surface of the hillock. On entering the temple on the peak, visitors are usually awe-struck by the towering statue of Bahubali, who is also known as Gomateshwara, depicted unclothed in the standing position. The 58-ft statue is considered to be the largest monolithic structure in the world and sculpted out of grey granite. It dominates the landscape around the area and devotees come to visit Shravanabelagola temple from near and far. Interestingly, the temple is also popular with Hindus as well. But the biggest event at Shravanabelagola temple is the Mahamastakabisheka, an anointing festival that takes place every 12 years when scaffolding is erected and the statue of Bahubali is given a sacred bath with holy water, milk, curd, honey, ghee, turmeric paste, sandalwood paste and such others and then showered with silver and gold coins. Lakhs of pilgrims gather to witness the festivities and take part in them. The next Mahamastakabisheka is scheduled for 2018. In addition to the Shravanabelagola temple there are various other Jain institutions in Shravanabelagola including basadis and mutts. ( Credit: Subramanyam Badhika)

Image:
Photograph from an album of 40 albumen prints by Edmund David Lyon. Sravanabelagola, in the Hassan district of Karnataka, is a site sacred to Jains and renowned for the 10th century monolithic granite figure of the Jain saint Bahubali on Vindhyagiri hill, the tallest free-standing sculpture in the world.
Bahubali meditated in the forest before attaining self-knowledge and reputedly was oblivious to anthills and vines growing about his legs whilst in this state. In his 'Notes to Accompany a Series of Photographs Prepared to Illustrate the Ancient Architecture of Southern India' (Marion & Co., London, 1870), edited by James Fergusson, Lyon wrote of this close-up view of the statue, known locally as Gomateshvara: 'After entering the doorway in the outer wall, the ascent is easy, steps being made to the top of the rock. Here there is a flat space on which the wall and porches round the inner enclosure are built. The view from the top over many miles of the surrounding country is magnificent. There is a large porch opposite the entrance, where the visitor must leave his shoes, and unless he has come provided with slippers made of list, must enter barefooted. The figure exactly faces the entrance. It represents the Jain God Gomateswara, and is cut out of one single boulder, is 60 feet high, and 25 feet across the shoulders. If the inscriptions were copied, they could easily be read, as the characters are perfectly known. They probably might contain something indicating a date. In the meanwhile, however, Colonel Mackenzie got two dates from this place; one, 1121, the other, 1126, which from the style, as well as what we know of the history of the country, is most probably the date of this statue. There is another, very similar, at Carculla, but only 28 feet high, which bears the date of 1431. This at least would show that the age above given, is, if anything, too ancient, but as we have no Photograph of the latter, we cannot feel sure of its style. It will be observed that the fore-finger of the left-hand is shorter than the others, and the story goes that just as the sculptor was putting the finishing strokes to his work, the colossus began to move, and terrified beyond measure at the idea of such a monster being let loose on earth, he struck at it with his hammer, and broke off the fore-finger of the left-hand; and thus the image, being maimed, remained lifeless and stationary for ever. No one is allowed to approach it closer than the rails. The two odd-looking mounds on each side of its legs are supposed to represent the curious mounds thrown up by the white ants in making their nests'.

Awesone statue of Gometashwer and excellent write up.

Thanks for posting this